Oútis, the debut album by the Slovakian duo Ceremony of Silence, is one of the most mind-bending albums of the year so far, a display of such astonishing (and mentally destabilizing) brilliance that it is likely to leave a shivering gleam in the eyes of astute listeners even as they make their lists at the end of this year.

The album will be released by Willowtip Records on April 5th. We have already published an enthusiastic review by our contributor Vonlughlio, who called it “spectacular from start to finish”, “complex and extravagantly inventive at many times, straightforward and simple (and oppressive) at others”, but since we have the privilege of premiering a full stream of Oútis today, I can’t resist adding my own equally exuberant comments by way of introduction. 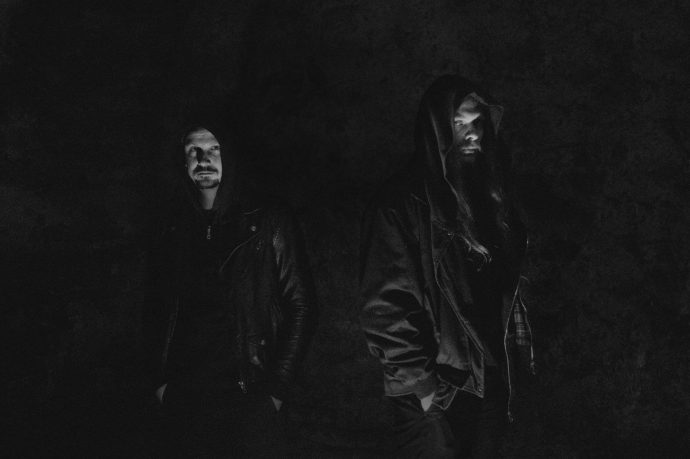 For those who prefer some kind of genre description up-front, you can think of the music as a technically pyrotechnic form of dissonant death metal, as avant-garde in its permutations as it is chillingly atmospheric.

Everything about the album seems unearthly, from the riotous extravagance of the instrumental execution to the persistently strange melodic accents and the volatile unpredictability of its freakish twists and turns. It’s as if we’ve been plummeted into a macabre kaleidoscopic hallucination, the visions flashing past our eyes almost too fast to comprehend what we’re seeing, but leaving the dominant impression that nothing we see is anchored in what passes for our own reality.

Tempos, riffs, and moods change without warning. The rapidly fluctuating fretwork is maniacal. The drumming is electrifying. The prominent bass tones are mercurial — burbling and bubbling, clanging and battering, humming and harrowing. The flashes and flurries of dissonant melody gleam with unnatural light. The abyssal, guttural roars are ghastly.

The music often hammers with skull-plundering power (the band do pay fleeting attention to the simple needs of inveterate headbangers), but it whipsaws with abandon as guitarist Vilozof causes his instruments to blare and shriek, to swarm in a frenzy, to dart like phantasms hunted by demons, to ring like chimes made on another planet. But drummer Svjatogor will not be outdone by Vilozof; he puts on a show that’s every bit as jaw-dropping.

There is an atmosphere of dangerous unforeseeability about the music. One imagines being surrounded by wraiths and monsters who have lost their minds, capable of looming and plotting with a cold, brooding malevolence and just as capable of erupting in assaults of shocking violence. The songs channel the bizarre introspectiveness of asylum inmates grumbling to people who aren’t there, but might then reveal jaw-dropping visions of celestial glory, or transform into the destructive sonics of gigantic demolition machines dismantling entire city blocks.

Even the instrumental piece in the middle of the album (“Upon the Shores of Death”) is eye-popping. It’s dismal and desolate, like the soundtrack to a passage across the River Styx, but the flickering dual-guitar solo is a manifestation of terrifying wonder.

We’re told that these songs were born of countless hours spent by Svjatogor and Vilozof in free-flowing, improvised jam sessions, and the album still bears the hallmarks of those origins. But somewhere along the way (and no doubt after innumerable additional hours), they managed to give shape to these irrepressibly shapeshifting creations, to give them just enough focus and definition that we can feel their pulse and remember their patterns. To be sure, it’s still bewildering, but it’s not sheer chaos. They walk a fine line, high up above the earth on a tightrope, but never lose their balance.

And with that, I thank you for indulging my verbiage (even though I didn’t ask your permission). I needed to get all these thoughts out of my head and into yours, for better or worse. And now, take some deep breaths and dive into Oútis.

5 Responses to “AN NCS ALBUM PREMIERE (AND A REVIEW): CEREMONY OF SILENCE — “OÚTIS””