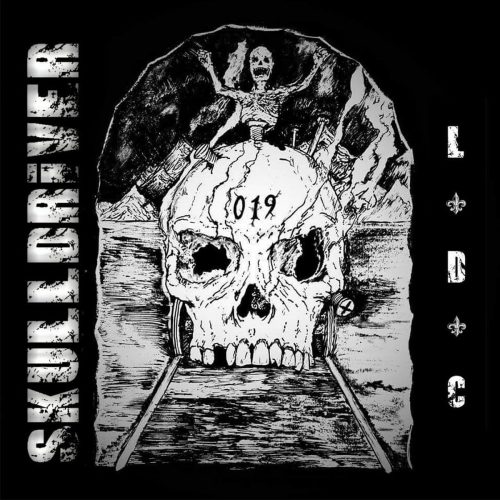 Skulldriver picked a damned good name for themselves, given the kind of music they crank out on their new EP, L.D.C. It locks into the part of the brain responsible for reflexive skull movement and takes over, rudely throwing the conscious part into the back seat and jamming the gas pedal to the floor while your head pounds like a piston. And in addition to packing in more grooves than is strictly legal, Skulldriver’s music is hotter than hell, meaner than a junkyard dog, and with enough non-stop high-voltage energy to power industrial turbines.

“Redneck metal” is what they call it, and the fact that they’re from southern Finland (Liljendal) rather than the southern U.S. doesn’t hold them back in the slightest. They’ve nailed down a mix of groove-laden thrash, hardcore, and backwoods, swamp-infested, roadhouse brawling, and it’s got a ton of primal appeal.

L.D.C. will be released by Elitbolaget on April 12th, and we’ve got a stream of all four tracks for you today.

Skulldriver don’t mess around on L.D.C. They rampage through four tracks in 13 1/2 minutes, every one of them capable of getting your blood pumping, and the whole EP finishing off just before you run completely out of breath.

The clanging bell of a train crossing opens “Cirque de la Furie“, and then this opening track takes off with a big squalling head-mover of a riff and a bludgeoning bass-and-drum rhythm. That riff is deep and thick and brutish, and the riffs just keep on coming — lashing and writhing and boiling, and even becoming magisterial, with an equally vibrant series of rhythmic progressions. The vocals are absolutely scorching and barbaric, not only here but over the rest of the EP as well — howling and roaring and shrieking, sometimes in a call-and-response pattern, and just generally manifesting red-eyed fury.

Speaking of fury, “Blind to See” launches in a raging effusion of blasting drums and razoring riffage, and then quickly segues into a jackhammering percussive tumult. Like the first song, it continues to twist and turn, batter and burn, while delivering plenty of those head-hammering grooves we warned you about.

All of the songs eat up the pavement in a rush, but each one has its own distinctive moments. A highly infectious darting lead and then jolting chords provide the backbone of “Grinding Teeth” over a methodically neck-wrecking rhythm, and then that lead guitar yowls as the vocalist yells, like a madman, and the whole thing surges toward a climactic display of rampant drum extravagance and an incinerating solo.

The EP ends almost before you know it with “Plague of Man“, a galloping firebrand thrasher, segmented by bursts of cruel, coldhearted riffing and plundering rhythms, as well as swirling fretwork.

And then you can take some deep breaths before driving L.D.C. through your skull again, which is a very natural impulse after such a storming thrillride.

Elitbolaget will release L.D.C. on CD and digitally, and you can pick it up via the links below. The label recommends the EP for fans of Pantera, Lamb of God, Slipknot, and what some people might call Modern Metal. Skulldriver has touring plans to support the release, and to see what’s coming, follow ’em on Facebook.