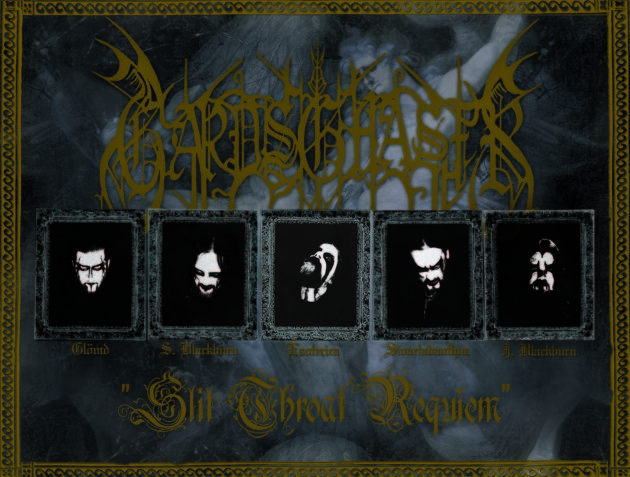 There’s some confusion (at least in my mind) about the band’s name. On Profound Lore‘s Bandcamp page for Slit Throat Requiem, it’s spelled “Gardghastr”. On Profound Lore‘s official site and YouTube channel it’s “Gardsghastr”. Neither name seems to be an actual word in any language, at least no word that Google Trtanslate recognizes, but I’m going with the latter since that seems to be the spelling on the album cover.

The two songs released so far meld tumultuous drumming, skin-splitting vocals, vibrant bass performances, and — in dominating fashion — blazing keyboard layers that are both glorious and demented. As the intensity of the drumming ebbs and flows, the moods of the symphonic music morph from heroic to bleak, from haunting to berserk, yet the atmosphere is persistently fantastical.

There’s a chilling, otherworldly quality to these songs, as they move among states of brazen bombast, wretched melancholy, and spectral mystery. And in the title track in particular, the music also becomes sweepingly beautiful and wondrous.

Slit Throat Requiem will be released by Profound Lore on April 26th. 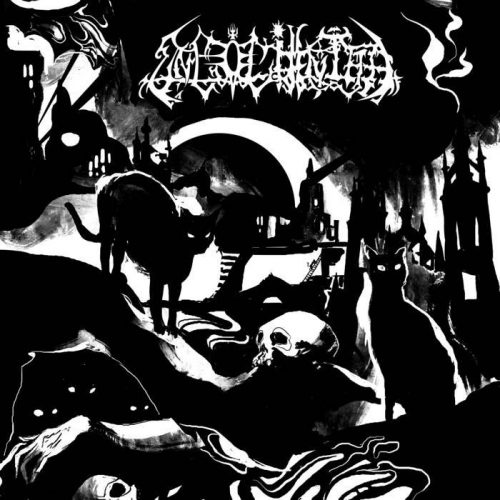 You’ll discover why I decided to follow Gardsghastr‘s two tracks with this new one from Ungoliantha, a sextet from the vicinity of Kiev, Ukraine, whose new EP The Howl in the Waste will be released on May 13th.

One might draw some clues about the music from the spooky cover art, which is home to black cats, skulls, and Gothic spires, and further clues from their Tolkien-esque name (a variation on Ungoliant). As manifested in the song “That Howl in the Waste“, the music has an air of gothic horror, thanks to the grand but ominous symphonic melody and the grotesque tones of the hoarse, roaring vocals that are interspersed with the scorching shrieks.

The song is a fiery, racing inferno until a bass solo provides a bridge to a more stately (and even more ominous) passage, which in turn is followed by a rocking, head-moving section and then a final surge of lunacy and terror. 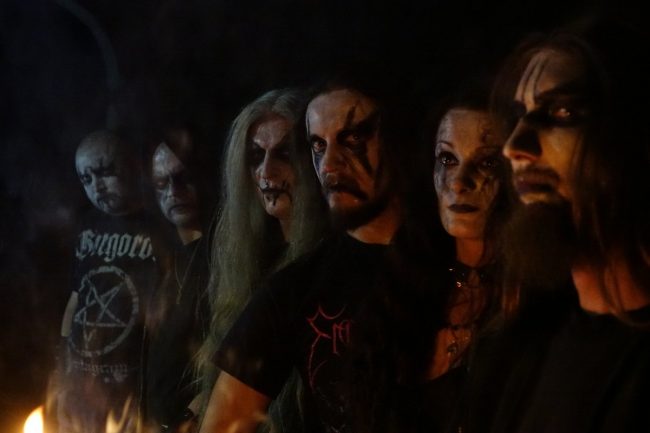 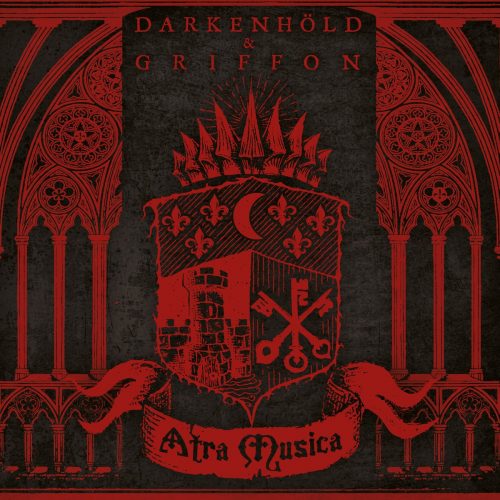 The Parisian band Griffon give me yet another occasion to proclaim 2019 a banner year for medieval black metal. On their new split release, Atra Musica, they contribute four songs, with four more crafted by the French band Darkenhöld.

The light opening guitar melody of the Griffon song below, “Si Rome Vient à Périr”, is immediately seductive, but becomes much darker and more hostile as the full band join in. The harsh vocals are downright bestial, though they convey devastating pain as well as malignant hostility. There are strident clean vocal proclamations in the song as well, which come in as the music begins to dart and dance.

The drums blast maniacally after that, but the melody moves more slowly, setting up feelings of beleaguered grandeur and feverish angst. The feeling of peril and pain doesn’t completely disappear even during a piano interlude, but is swept away by the glorious symphonic crescendo that follows, and by the brightness of the trailing keyboard melody, which sounds close to a harpsichord.

This is a much more richly ornamented, baroque offering of medieval black metal than the other forms I’ve been highlighting since the beginning of the year, but it’s still damned captivating.

Atra Musica will be released by Les Acteurs de L’Ombre Productions on May 31st. 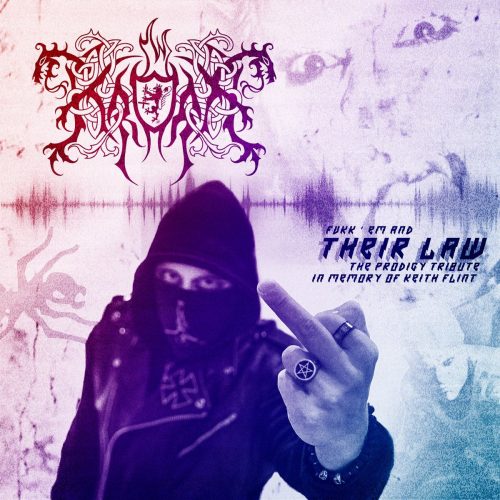 Now it’s time for the surprise I mentioned at the outset. The name Kroda will not be a surprise — I’ve written about them so many times since discovering their music many years ago that even casual visitors to NCS will surely know of them, even if you hadn’t discovered their Helcarpathian black metal elsewhere. The surprise is this new single, which was released via Bandcamp on April 16th.

It turns out that the main man behind Kroda (Eisenslav) is a fan of The Prodigy, and the single (“Fvkk ‘Em and Their Law“) is dedicated to the memory of Keith Flint, the vocalist (and dancer) of that influential British electronic music band, who took his own life in March of this year. The single seems to have been created from a medley of three riffs from songs by The Prodigy, though I’m not enough of a Prodigy fan to tell you which ones they are.

As a “CyberPunkRaveMetal experiment”, the song is of course quite different from Kroda‘s usual creations, though it shouldn’t come as a complete shock if you’ve heard the ambient music that Kroda released as the first chapter of their triple-live-album Kalte Aurora – Live in Lemberg II (2016-17). On the other hand, this vibrant tribute rocks damned hard, and it segues through the different head-moving cadences pretty seamlessly, driving hard with jabbing and jolting riffs, with darting and wobbling bits of electronica adding to the song’s dance-able energy. Thankfully, there’s vicious extremity in the vocals (and even a bit of blasting drums near the end).

P.S. Just in case you are only now discovering Kroda, I’m also sharing with you a video of Kroda‘s live performance of “Universal Provenances“, one of the five tremendous tracks on Kroda‘s 2011 album, Schwarzpfad. The performance is an excerpt from that triple-CD release, Kalte Aurora – Live in Lemberg II, which I believe is still planned for a DVD release at some point. 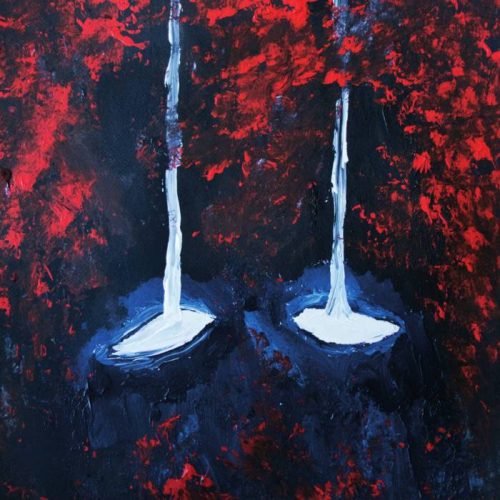 This makes the third appearance in SHADES OF BLACK by the Dutch one-man band Verwoed, although the first appearance was back when the band was named Woudloper. The second occasion was prompted by the release of music from Verwoed‘s 2016 debut album, Bodemloos.

Verwoed has now completed work on a second album, De Val, which will be collaboratively released by Sentient Ruin, Argento Records, and Tartarus Records on May 23rd, and we have two of the album’s five tracks we can now share with you — “De Val” and “De Kwelling van het Bestaan“.

The title song delivers clobbering physicality, disorienting dissonance, and a mix of high, flickering leads and roaring vocal hostility that together enhance the music’s harrowing and hallucinatory qualities. Despite the vertebrae-fracturing force of the rhythm section, it manages to be a mesmerizing and even dreamlike piece of music, though quite desolate and disturbing in its moods, which range from despairing to despondent.

The grim, hallucinatory quality of the music persists in “De Kwelling van het Bestaan” — and so does the physical compulsiveness and weight of the rhythm section and the terrorizing effect of the vocals. But this song falls even more deeply into a frigid abyss of despair. The drums periodically race, and the riffing becomes frenetic, but even then the atmosphere is oppressive and unreal — and when the drums disappear and the vocals turn to wails, the music becomes even more nightmarish. 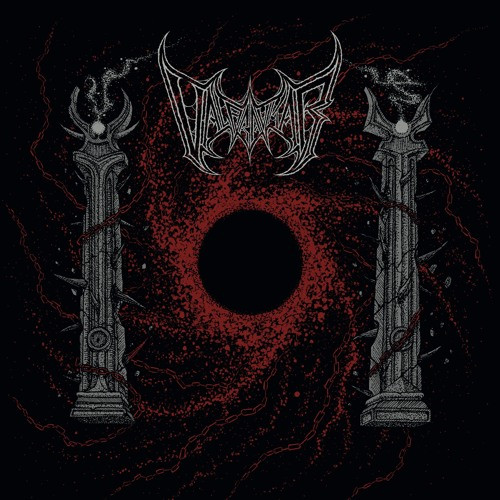 “The Unassailable Throne” is the first advance track from the album. Dismal and disturbing at first, the song becomes a raging delirium of pain and fear when the band kick in the after-burners. Battering drums, a squall of boiling yet bleak guitars, and riotous howling vocals together create an atmosphere of terrible chaos and hopelessness. There’s still an unmistakably bleak tone to the song when it shifts gears into a thrusting, rocking rhythm, but that section is insidiously infectious despite how full of misery it is.

When the song begins to surge again, the ever-changing drum patterns will keep you off-balance, and there’s nothing comforting about the cold cruelty and crazed tremors of the riffs either. It’s a dynamic, gripping song all the way through, and as the title suggests, there’s also something diabolically majestic about it.