As many of you already know, four tremendously good black metal bands — Thy Darkened Shade, Abigor, Mortuus, and Nightbringer — have joined forces to create an album-length split recording that has been one of my most highly anticipated releases of the year. We began hinting at this release back in January when we premiered an excerpt from Thy Darkened Shade’s offering for the split. Since then, excerpts from each of the other band’s tracks have gradually been revealed. The last one came yesterday when Nightbringer previewed its track, which is named “Tunnels”. 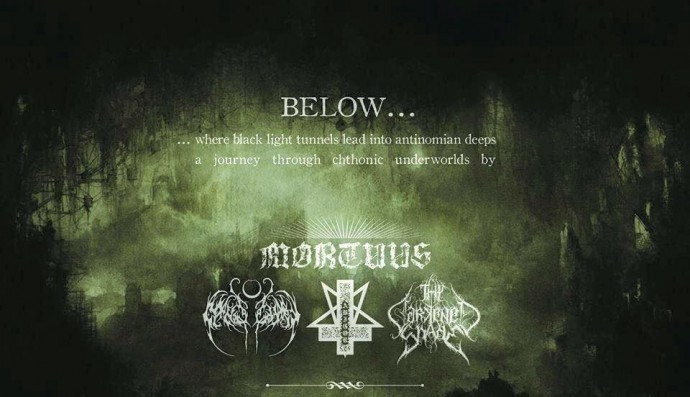 Yes, I’m sure we can all agree that it’s frustrating as greedy fans for us to make do with excerpts of longer songs — unless of course the excerpts suck, in which case we are grateful for being spared a more extensive torture session. This one does not suck. Far from it, the music is blistering and bombastic, a pitch-black summoning of malign forces through seething riff assaults, booming drum beats, savage, panther-like cries of passion, and hollow, heartless roars.

Below I’ve collected streams of all four excerpts from the split. I’m still unsure of the release date and haven’t yet seen how orders for the split can be placed. I’m sure I’ll spread the news about those things on our site as soon as I find out. 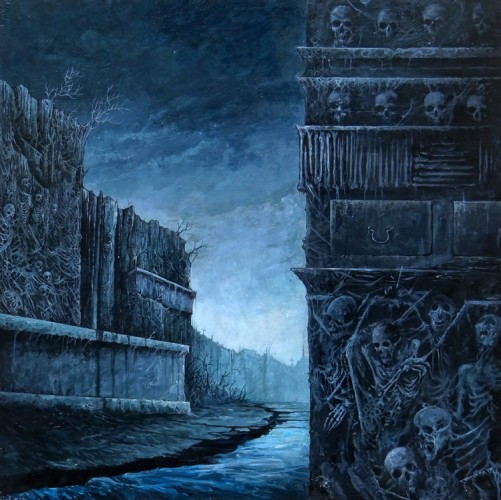 The Hecatomb is the name of the new album by Australia’s Temple Nightside, which is scheduled for release by Iron Bonehead on the distant future date of August 5. I haven’t yet made time to hear all of this ominous undertaking, but the two songs that have been revealed so far — “Adrift In Sepulchral Entropy” and more recently “Fortress of Burden and Distress” (via DECIBEL) — make a staggering impact.

“Fortress” is the longer of the two. At the outset, it lumbers like a giant being led to his executioner, with a dank, dreary atmosphere that bespeaks a looming horrific doom, made all the more terrifying by the ghoulish shrieks and ghastly gurgles and growls of the vocalist. When the music shifts into a more tumultuous gear, the earth seems to shake and an enormous buzzing sound fills the air, along with slow ominous chanting. It’s a thick, claustrophobic, utterly oppressive piece of occult black/death.

“Adrift” rushes from the start like a flooding black river scattering boulders in its wake. The dense, whirring riffs and thundering drums are heavy and gruesome enough to shiver your spine, and the skittering arpeggios are a vivid form of musical dementia. It’s a convincingly malignant torrent of otherworldly sound. 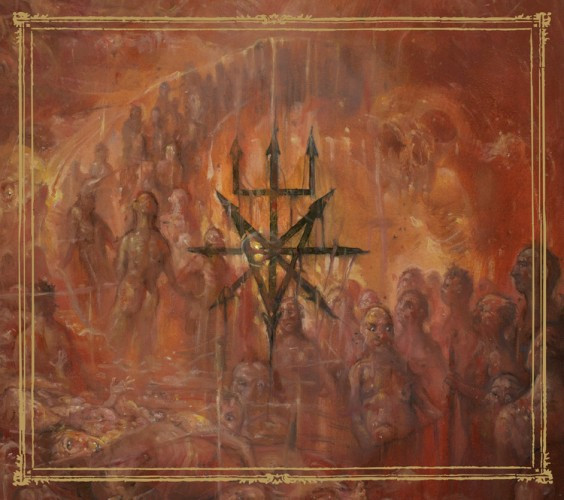 When I began listening to this San Jose band’s 2012 demo Summoning Aural Hell, I described my immediate reaction thusly:  “This is 100% lo-fi, scratchy, ugly, thrashing/rocking black metal that gives no Fucks. The vocals sound like a man being boiled in oil, the rhythms continually change course, the riffs are raw and hook-filled, and the production is about as filthy as an overflowing cesspool.” I loved it. And now I’m fully prepared to love the band’s new, self-titled album.

On June 3, DECIBEL premiered the first advance track from the album, “Sigil of Burning Flesh”. Introduced by a grinding industrialized sound, the song soon enough begins to rampage with a will. The high-intensity riffs ratchet the tension to the breaking point as the drummer spits high-caliber ammunition with merciless intent and the vocalist shrieks in a blood-red fury. The song only becomes more violent and electrifying as it rushes ahead, with flailing, barbed-wire riffs that will get your head moving even as they do their best to flay the skin from your bones and punk rhythms that may make you want to bust up your furniture. As musical demolition jobs go, this one is deliciously destructive.

I have to add that I still think this band’s name is genius. About the only names I’ve thought of that might compete with it as vivid, profane representations of grim and all-too-human horror are Unwashed Goddamned Butthole and Motherfucking Pus-Filled Boils. Inexplicably, those names don’t seem to be taken yet.

Black Fucking Cancer will be released on June 24 by Osmose and Graceless on CD and tape, respectively. A double LP will follow. If you like what you hear, go over to DECIBEL and read the interesting band interview by Dutch Pearce: 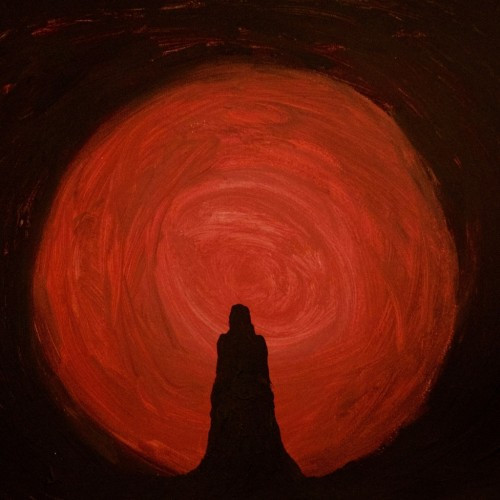 Last fall I came across a very strong first demo by a Dutch one-man band named Woudloper, describing it as follows:  “The music crosses boundaries, fusing together elements of atmospheric black metal, sludgy doom, and post-metal. It’s staggeringly heavy and manages to be both mesmerizing and frightening…. This is a very strong debut from a creative composer who knows how to carry the minds of listeners away into his own dark world and leave them changed by the trip. I’m looking forward to what come next from Woudloper, while continuing to enjoy the staying power of this demo.”

Now we know what will come next from Woudloper’s creator Erik B. He has changed the name Woudloper to Verwoed and has recorded a new album named Bodemloos, which will be released by Argento Records on July 8. The album consists of three tracks, and the title track has become available for listening.

“Bodemloos” is downright otherworldly, rippling with lead guitar motifs that shimmer and writhe like ghost lights above a marsh or streamers from passing comets in a night sky. But the music is also very heavy, anchored by huge, groaning chords and pummeling percussion — it’s mesmerizing but also surges with dark power. Bestial, grating growls complete a strikingly multifaceted song that’s both psychoactive and physically compulsive — arcane food for both the mind and the body that leaves me pleasantly bewildered and hungry for much more. 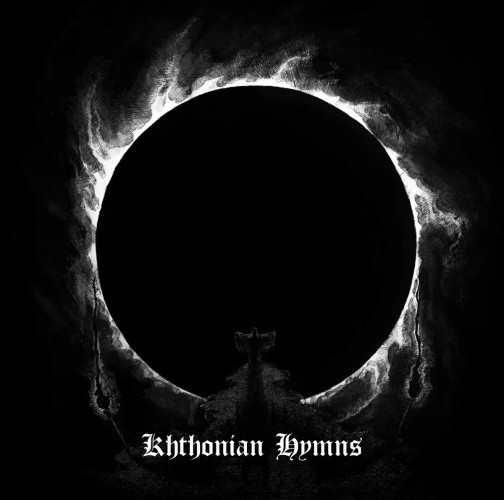 Last, but certainly not least, I want to recommend the debut album of a one-man Greek band named Deisidaemonia. Entitled Khthonian Hymns, it was jointly released on May 27, 2016, by Old Temple and Metal Throne Productions and is available on Bandcamp.

This is another instance in which I wish I had time to write a more complete review of the album, because it is a very, very strong addition to the rich history of Hellenic black metal. Over the course of the album’s eight tracks, it manifests primeval, infernal darkness in a variety of ways. It rocks and stomps with indigo might; it slashes and burns in warlike charges; it swings and waltzes like a coven ’round a bonfire; it marches in solemn processionals to the tune of melancholy yet menacing laments; it’s majestic at times and feral at others.

It’s packed with gripping riffs, dynamic rhythms, and memorable melodies (often with an ethnic, folk air) — and it includes well-timed and beautiful acoustic guitar interludes as well. And on top of all that, many of the songs are also virally infectious; more than one of them (but most prominently “Towards the Horizon”) has already gone on my evolving list of candidates for this year’s Most Infectious Extreme Metal Songs.

In short, this is a very impressive debut that I hope will get the attention it deserves.