Here’s the news item, which is a rarity because we’re really not set up to share the word about new tour announcements, since that would become a full-time job, and I’d rather spend the time writing about new music. But in this instance I made an exception, because it concerns Majestic Downfall, and in particular an excursion by that fine Mexican band into the provinces of The Great White North. 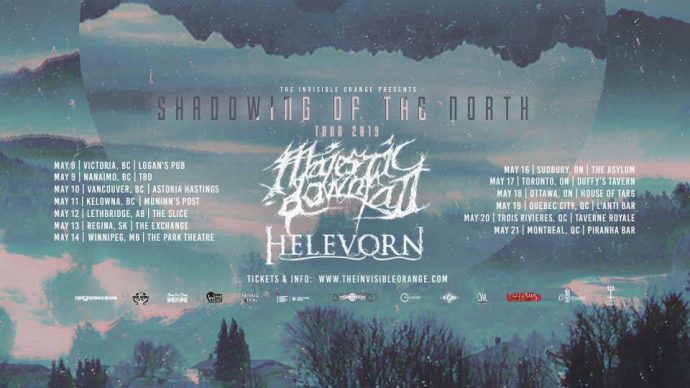 Shadowing the North is the name of this tour, on which Majestic Downfall will be accompanied by the Spanish doom band Helevorn, whose latest album Aamamata was released in January of this year. Just last month I featured Helevorn’s new lyric video for the song “Aurora” in another one of these round-ups (here), along with several paragraphs of words (I got carried away by the music).

Their tour will begin on May 8th in Victoria, BC, on the west side of Canada and will end on the other side in Montreal on May 21st — a total of 13 dates in all. I haven’t tried to find out if either of these bands have toured Canada before, but even of they have, it’s not a common occurrence, and Canadian doomsters should take advantage of the opportunity to see them. Ticket info for all the dates can be found here:

I’m probably not going to be able to cross the border to see any of the shows in western Canada, but I’m looking forward to seeing Majestic Downfall at Maryland Deathfest, which is coming up damned fast. For those who might just be discovering these two bands, below I’ve included my favorite song from Majestic Downfall‘s latest album, and that video for “Aurora” by Helevorn. 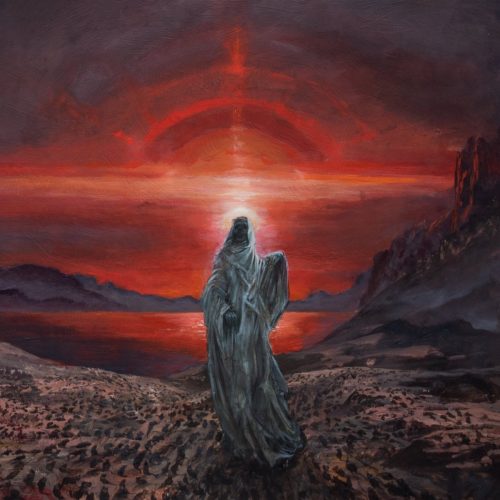 Now I’ll turn to new music, beginning with a stunning track by the Swiss band Forlet Sires off their new album, which as you can see is adorned by a stunning piece of art by Adam Burke. The track is “Carnage and Candor“, and it’s the opening song and first track to be previewed from Holy, which is being released today.

At 12 1/2 minutes in length, “Carnage and Candor” is an amalgam of doom and atmospheric black metal that’s completely captivating in all its changing moods and variations in power. At times it’s glimmering and ethereal, at others mountainously heavy and shattering in its intensity. The band reach heights of sweeping grandeur, become consumed in paroxysms of wrenching anguish, and reveal vistas of beautiful melancholia.

The rippling guitar harmonies, vibrant bass lines, and prog-minded accents stand out, along with a nuanced drum performance that always seems perfectly attuned to the textures and moods of the music. The vocals are another great highlight. Though variable in their emotional colors, they’re relentlessly gripping, and usually explosive in their passion and power.

As I mentioned, the entire album is being released today, and is available for listening in its entirety on Bandcamp. I haven’t yet had the time to listen to all of it myself — but it’s very high on my list of things to do this weekend. 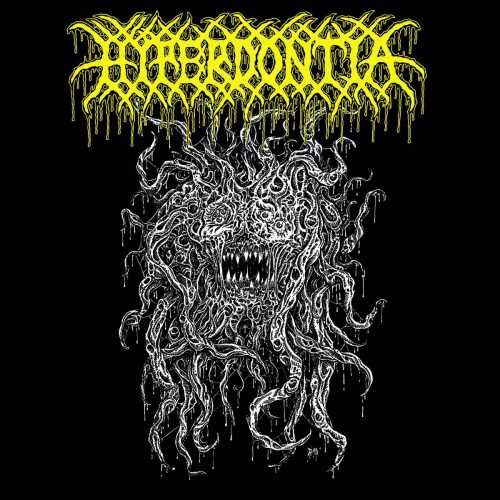 Hyperdontia aren’t letting any grass grow beneath their feet. This part-Danish, part-Turkish death metal band released a hell of a good debut album last year — Nexus of Teeth — and now they’re coming back with a new compilation EP named A Vessel Forlorn, which is scheduled for release on May 16th (by Dark Descent on CD, by Me Saco Un Ojo Records on vinyl, by Extremely Rotten Productions on cassette, and digitally as well) and features artwork by David Mikkelsen.

The EP includes one new song (the title track), two live recordings from a December 2018 show in Istanbul, and the three tracks that were originally released as the Abhorrence Veil single in 2017. Below you’ll find a stream of that new song, which is many things at the same time. On the one hand, it’s ugly as hell and as vicious as a pack of famished wolves (or flesh-eating ghouls). On the other hand, it’s constantly surprising and instrumentally adventurous.

In a cold-blooded fury, the band bludgeon, batter, and carve like a big table saw, but they dart and dive like bats, shifting gears without warning, and throw in alluring wisps of melody (and a few wailing, shrieking, and flickering solos). The song as a whole is just a tremendous thrill to listen to, and will appeal to people who like their barbarity delivered with flair and rampant exuberance. 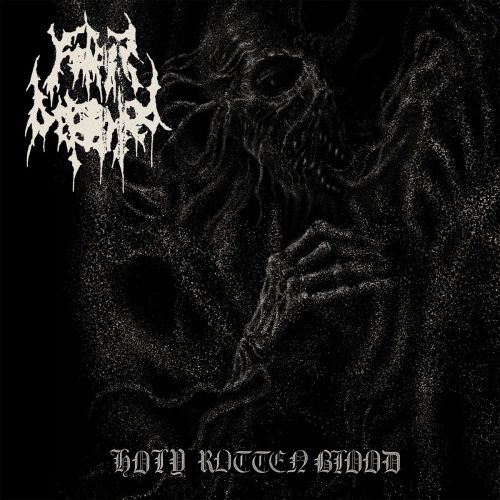 Roughly two years after the release of their monstrous 2017 album Desolate God, Atlanta-based Father Befouled have an all-new EP named Holy Rotten Blood looming on the horizon. With terrifying cover art by Alex Shadrin, it’s set for release by Dark Descent on May 17th.

The title track is the one that went up for streaming last week, and it makes for a very good pairing with that Hyperdontia song. With thoroughly gruesome gutturals giving the music an immediately horrifying atmosphere, and a guitar tone that’s as toxic as an industrial waste site, the song is massively heavy and thoroughly demented. A slaughtering rampage at first, it devolves into a slow, morbid, oppressive crawl, laced with string-shrieks and desolate leads before ramping up again into a final effusion of savagery.

What’s that Obi Wan told Luke about Mos Eisley? “You will never find a more wretched hive of scum and villainy”? He obviously hadn’t heard the music of Father Befouled. 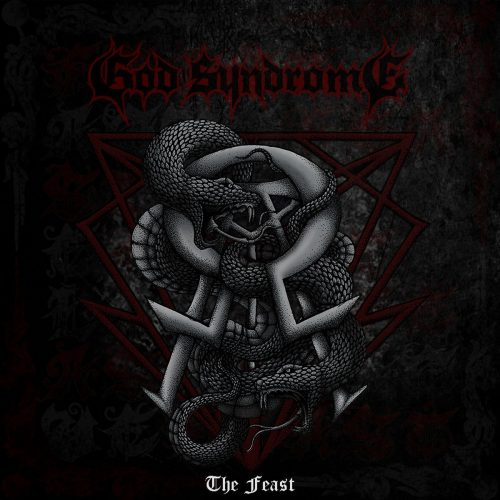 Andy Synn reviewed the 2016 debut album of this Russian band (from Samara) for us, and I’ll crib from his words about Controverse as an introduction to their new single:

“With a sound made up of approximately 50% Hypocrisy, 25% Decapitated, and 25% Hate, what the self-described ‘Extreme Melodic Death Metal’ of Russian quintet God Syndrome may lack in originality, it more than makes up for in sheer, propulsive power.

“Packed to the brim with blasting drums, blistering riffs, and booming vocals, tracks like the monstrous opener “Purge”, the pseudo-Polish, semi-Swedish blast and groove of “Clan”, and the pneumatic/melodic “Dark Sand”, find the band proudly wearing their influences on their sleeves, but doing so with such vitality and vigour that it’s hard to really find fault with their approach.

“…. [F]or a band only just beginning to make a name for themselves, right now the sky really is the limit for God Syndrome.”

The new single, “The Feast“, was released on April 14th. The influences identified by Andy haven’t disappeared, but there’s also more going on here than blasting drums, blistering riffs, roaring vocals, and punishing grooves — though you’ll eventually get plenty of that in “The Feast”. The opening minute or so of the song, for example, is an instrumental that creates an ominous and eerie mood, but the strumming will also start your head moving before things get much, much heavier and even more unsettling.

The writhing leads that surface before the drums begin their strafing run and the riffing transforms into a grim and gruesome drilling sound seize attention, and everything else that happens afterward is just as gripping. It’s a bone-mangling, bitterly vicious experience, but the band make excellent use of melody, including an exotic guitar solo and soaring flares of magnificence in the song’s second half — right before they give you a chance to headbang your heart out in a mid-paced stomp, and then end the track in head-spinning fashion.

As you can tell, I thoroughly enjoyed this new single. God Syndrome continue to prove that they’re a band worth watching very closely indeed. 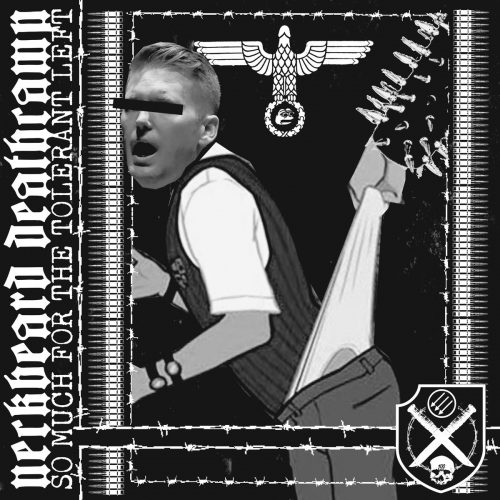 I have a lot of friends and acquaintances who are angry or disgusted by the rise of Neckbeard Deathcamp, which has been fueled by the notoriety of their comical puncturing of “neckbeard nazis”, the alt right, and racist/nationalist strains of black metal. I have probably an equal number of friends and acquaintances who think the band’s personas, song titles, lyrics, and artwork are hilarious and their anti-fa stances laudable.

In our politically polarized current age, which characterizes metal communities as much as all others, it’s impossible for most people to separate the band’s music from their particular ethos, and I’m sure they would have it no other way, but all I intend to do here is recommend the music in this new song “What Are the Cargo Pockets For Lanza Extra Mags“, because I like it and don’t tend to get too worked up over all the political triggers or the gimmickry.

Why do I like it? Because it’s such a goddamned overpowering black/death assault on the senses — an absolute frenzy of thundering drumwork, punishing yet mercurial bass lines, ferocious riffing, and cavernous vocal monstrosity.  And while the song strikes like a cyclone, the band do pull back on the throttle and pound away with skull-cracking grooves and weird clanging chords that get stuck in the head, despite how deranged they sound.

This new song comes from Neckbeard Deathcamp‘s new album, So Much For the Tolerant Left, which will be released by Prosthetic Records on May 24th.