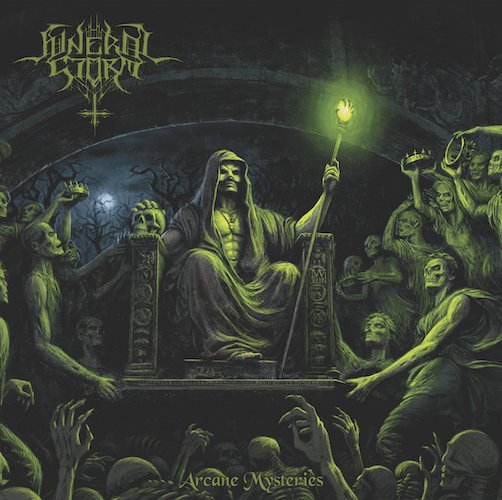 The origins of the Greek black metal band Funeral Storm date back to 2001, when it began under the name Raven Throne as the solo project of Wampyrion Markhor Necrowolf. After a long period of inactivity the band re-surfaced with its first release in 2012 under the name Funeral Storm. Further line-up changes occurred, and the band then participated in a 2017 split release (Funeral Rite) with the Greek band Celestial Rite — which is when I first encountered Funeral Storm‘s music, and became an immediate fan.

For the two tracks on that split, the band’s founder was joined by vocalist Necroabyssious (of Varathron, Katavasia, and Zaratus) and by Nick Christogiannis of Deviser on keyboards. Eskarth of Agatus also performed acoustic guitars and a solo on the song “Martyr Of The Lake”. I thought both songs were tremendously good. They embraced the mysticism and might of classic Greek black metal from the early ’90s, and included immediately compelling riffs in addition to powerful drumming and voracious vocals.

And now here we are, at last, with a full-length display of Funeral Storm‘s formidable talents. Arcane Mysteries is a fantastic album, a monument of sinister and mythic heavy metal majesty whose appeal should extend far beyond devotees of black metal. I am very excited that NCS is hosting the premiere of a song from the record in advance of its May 31 release by Hells Headbangers, particularly because it’s a song that shares the name of the band. 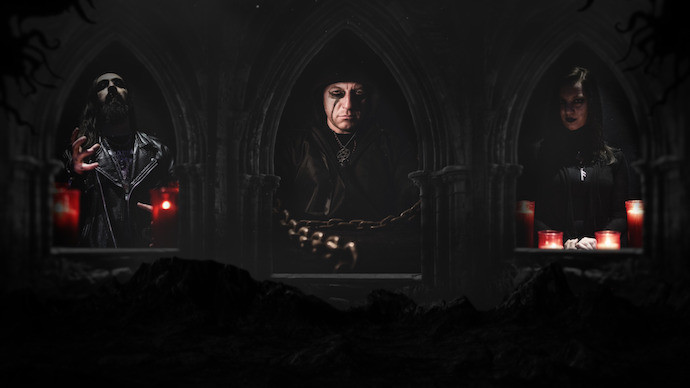 For this debut album Wampyrion is again joined by Necroabyssious, but the line-up now also features guitarist Arcania (Aherusia), who also shared in the creation of synthesizer music with Wampyrion. The album also includes the two tracks from that excellent 2017 split, as well as a guest performance by The Magus (of Necromantia and Prinicipality Of Hell), who composed, recorded, mixed, and mastered the song “Wandering Through The Abyss.”

There’s a lot to like about Arcane Mysteries, but the magical power of the riffs is at the forefront, and “Funeral Storm” (the song) is a prime example of how powerfully seductive they are, capable of bending your moods and generating atmosphere while also (together with the potency of the rhythm section) compelling head movement.

With a sharp and robust production that provides clarity without sacrificing power, the song moves back and forth between two principal riffs, backed by skull-hammering drum beats and pounding bass lines. The opening riff is a swirling melody that’s somehow both bright and moody, and it’s immediately alluring, while the second is more desolate and ominous in its mood — and a ringing guitar interlude deepens the bleak and melancholy aspects of the song. Meanwhile, Necroabyssious delivers scorching howls and fiery, defiant proclamations, lending a feeling of palpable danger and imperious zeal to this sonic black sorcery.

In addition to our premiere of “Funeral Storm“, I’m including streams of two previously released tracks, “Ego Sum Filius Draconis” and “Origin of Utter Evil“. The former is night-dark yet majestic and scintillating, and just as spellbinding as “Funeral Storm” — a brilliant piece of heavy metal black gold. The latter is perhaps more savage and fiery, but still glorious, with a keyboard melody that lifts the song to heights of mythic grandeur — the kind of song that causes devout metalheads to lift their clawed hands to the skies in reverent exultation, but also brings down a shroud of menacing gloom.

These three tracks alone provide convincing evidence of Funeral Storm‘s songwriting and performance skills, which together make Arcane Mysteries such a stand-out release for 2019. If it’s not obvious already, I’m completely taken with it, and hope you’ll become enthralled as well.