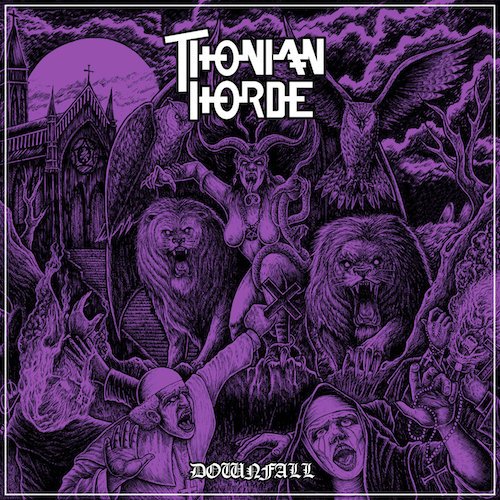 Two years ago we had the pleasure of premiering a track from Inconnu, the second album by the Maryland black metal band Thonian Horde, which was released in September 2017 by Grimoire Records. That album proved to be a huge eye-opener for this writer, featuring the kind of surprising and multi-faceted music that stretched the boundaries of black metal without losing touch with the more feral and ferocious through-lines of the genre. It was thus exciting news to learn that Thonian Horde would be returning with a third album, and here we are again, grateful to be premiering a track from it.

The new album, Downfall, will again be released by Grimoire Records, with a due date of May 24th, and the song we’ve got for you today is “Cathedral Spire“. 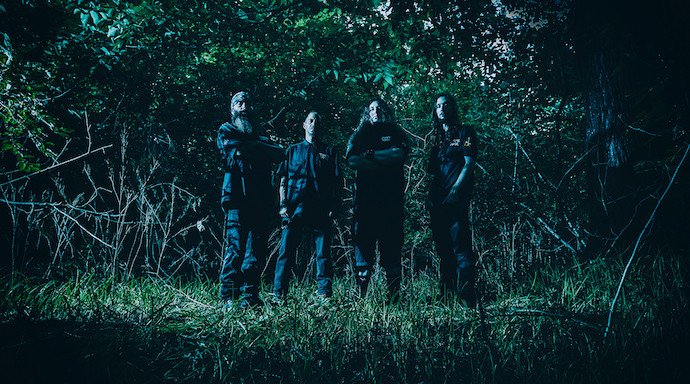 For those who are just now discovering Thonian Horde, it’s a band whose members honed their chops in other groups before joining forces in this new horde, but the music of their other projects wouldn’t lead you to expect the trails they’ve chosen to blaze here.

Thonian Horde’s line-up consists of people from such bands as Pale Divine, Admiral Browning, Weed is Weed, and Faith in Jane — bands whose music falls under the headings of doom and stoner metal. And while their creations under the name Thonian Horde are definitely rooted in more blackened realms of the metal landscape, they haven’t entirely lost sight of where they came from, which is part of the music’s appeal. Among other things, they know how to write compelling riffs, they rock out like madmen, and they’re capable of creating spectacular musical fireworks. The result is music that should appeal to fans of Immortal, Satyricon, and Dissection, as well as the kind of music the members of Thonian Horde create in their other projects.

“Cathedral Spire” is a great example of all these qualities. It’s a heavy and highly headbang-able song, displaying a swaggering, carnal physicality that will likely gets its hooks in the reptile part of your brain damned fast. It also demonstrates Thonian Horde‘s proclivity for beginning in one place and ending in a place you might not be expecting.

Deep, dismal, cruel guitar vibrations launch the track, joined by truly scalding shrieks and big fanfare-like blasts of sound and a romping, neck-cracking drum gallop. Boiling but glorious leads add to the music’s building atmosphere of menacing majesty, while bursts of blast-beat fury and vicious, swarming chords enhance the song’s air of ferocity. About three minutes in, a brain-searing solo becomes the prelude to a jolting, neck-wrecking riff, which becomes the foundation for an even more extravagant solo, a piece of fireball lunacy that rockets the song into a stratospheric finale.

Below you’ll also find a stream of a previously released track, “The Narcissist“, which is by turns electrifying, menacing, bleak, and insanely ebullient — a full-throttle thrill-ride that leaves eyes wide and lungs pumping hard for air (until things get very spooky at the end). And within the new album there’s a hell of a lot more excitement where these two tracks came from.

Like Inconnu, the tracking for Downfall was done mostly live in the Grimoire Studio with label boss Noel Mueller, with minimal overdubbing. The fantastic cover art was again provided by Gilbert Miranda for Lingua Mortis Artwork, and the CD layout was finished by Mueller.

Downfall will be released via limited edition CD and digital download on May 24th, and it’s available for pre-order now.