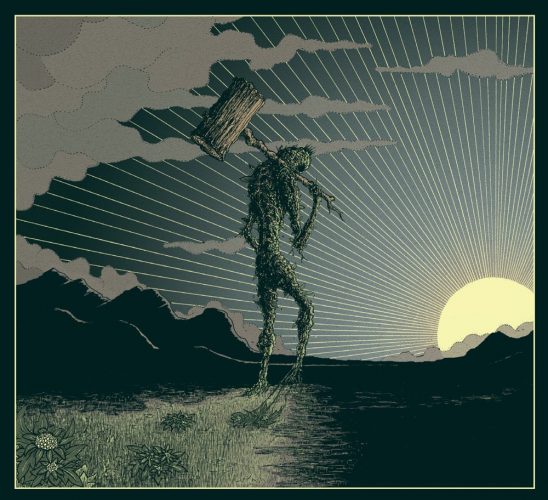 I concede that I’m stretching the definition of “premiere” in this post: The first five tracks on this new album by Botanist were previously released in 2015 as EP2: Hammer of Botany (in a limited CD edition sold during a European tour), and the new sixth track (“Oplopanax Horridus“) was out in the world for a time when Bandcamp pre-orders for the album were launched.

On the other hand, today really is the first day when you can listen to all six tracks straight through, from beginning to end, in advance of the album’s official release in vinyl and CD editions on May 10th, and that’s what you’ll have the opportunity to do at the end of this post. 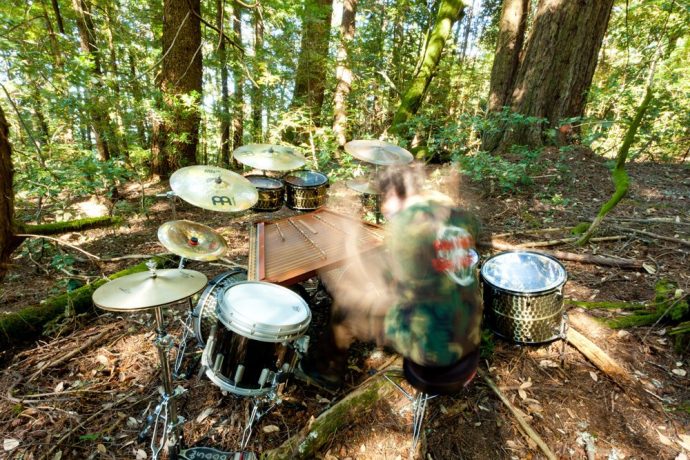 We’ve been following Botanist at this site since 2012, fairly close to the project’s beginning. For the previously uninitiated, Botanist is the personal vehicle of the afore-mentioned Otrebor, whose albums “tell the story of a botanist gone mad at witnessing the destruction of the natural environment at the hands of man.” “He retreats into a hermitage, surrounding himself with the natural world. In this Verdant Realm, he awaits for the day when humanity will eradicate itself, which will allow for the utopia of flora and fauna to eventually reclaim the earth.”

The Botanist imagines events in which a host of plants reassert the dominance of nature over deplorable humankind, and these visions have been musically captured over the course of seven albums and three EPs to date, in music of considerable variety. Because Otrebor is a percussionist at heart, he chose the hammered dulcimer as his principal melodic voice, an ancient instrument that can sound like a guitar or a piano (among other things), although Otrebor is an astonishingly good drummer as well.

The most recent album, Collective: The Shape of He To Come, was one that we premiered (here) along with an interview of Otrebor. It diverged from the model of previous Botanist studio albums in that rather than Otrebor doing everything, it was instead recorded more like a full band, with different responsibilities assigned to different people.

Thematically, The Shape of He to Come also diverged from the template of Botanist songs being about plants, and instead (as Otrebor explained in that interview) “focuses more on some of the philosophical and mythological aspects of the world within the Verdant Realm — The Verdant Messiah, The Budding Dawn, the floral apocalypse, and the afterlife of The Chlorophyllic Continnum… In this way, The Shape of He to Come is sort of Botanist’s version of an orthodox black green metal album”.

Hammer of Botany, on the other hand, dates back to Botanist’s “one-man period”. The drums were recorded in 2011, and the rest of the instruments and vocals in 2013. Thematically, as Otrebor has explained:

“Hammer of Botany refers to the EP’s titular character, Arctopoides, a hammer-wielding floral giant who walks the earth and is invisible to man. In his wake, the Sanicle Prince leaves behind the Footsteps of Spring, small patches of clustered yellow flowers that heal the ravaged land. Where there was wasteland and desolation, Arctopoides brings rebirth.”

If the somersaulting, blasting drum beats of first track “The Footsteps of Spring” don’t shoot electricity straight down your spine, that would be surprising. Enhanced by Otrebor’s jagged howls, it’s probably as ravaging a black metal assault as you’ll find in the Botanist repertoire — but it’s also uniquely a Botanist song, the reverberating dulcimer tones giving the music a mystic, sylvan aura.

Three of the other four songs on the EP are in a similar vein, blending jaw-dropping, highly adrenalized drum performances with slow, shimmering dulcimer melodies that drift like ethereal clouds above the tumult, or peal like bells. “Stachys Olympica” is the one outlier, a song with a more stately (but still rocking) drum rhythm, and one that integrates beautiful, pure vocal tones alongside the growls. It’s simply mesmerizing — which is a good word for the entire EP.

To flesh out Hammer of Botany into album length, Otrebor recorded that new song, “Oplopanax Horridus“. As The Font of All Human Knowledge tells us, the colloquial name for Oplopanax horridus is “Devil’s club”, or “devil’s walking stick”. It is “a large understory shrub endemic to the arboreal rainforests of the Pacific Northwest, but also disjunct on islands in Lake Superior”, and it is “noted for its large palmate leaves and erect, woody stems covered in noxious and irritating spines.”

There are many other interesting facts to be learned about Oplopanax horridus from that linked source, and about the uses to which it has been put by humankind. As for the music, the song is a long one, at nearly 13 minutes, and it’s glorious — and haunting.

The thrilling opening movement of the song is certainly glorious, combining Otrebor’s riveting drumwork, the gleaming splendor of hammered dulcimer tones, and clean vocals. Otrebor continues to coax a rich array of sounds from the hammered dulcimer, while also bringing in his own torrid shrieks, and moving the music through dramatically changing energies through his drumwork. The interplay of differing vocals also continues, at times somber and whispered, at other times tortured and vicious.

At times bright and beautiful, at others dark and despairing, the song is an enthralling trip into another world, and a great addition to Botanist’s catalogue. 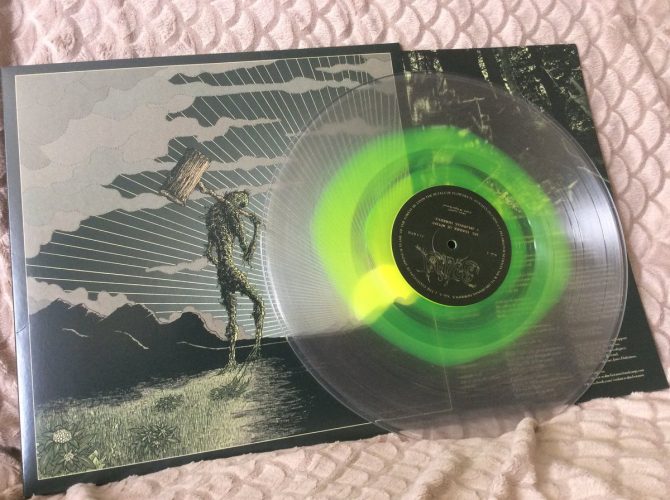 In the U.S., Hammer of Botany + Oplopanax Horridus is being released on black vinyl, marigold vinyl, and spring yellow in clear vinyl, as well as on CD, with art and layout by Irrwisch. In Europe it will be distributed by Aural Music on green vinyl. Eventually, it will also be released digitally through Bandcamp. You’ll find a pre-order link below.

OTHER BOTANIST NEWS: As I write this, Botanist is in Japan on a tour that began on April 30. To find further details about that, visit Botanist’s Facebook page.

In addition, yet another new Botanist song is being released on Metal Swim 2, the second volume in Adult Swim‘s metal compilation series. Botanist’s track is one of 15 on the comp, which also includes new tracks by Alien Weaponry, Akvan, Author & Punisher, Baroness, Dark Castle, Dreadnought, Eyehategod, Kat Katz + Andy Gibbs from Thou, Nervosa, Oathbreaker, Sunn O))), The Body, Vile Creature, and Volahn.

Metal Swim 2 includes cover art by the wonderful Becky Cloonan, and later today you’ll be able to listen to it here: