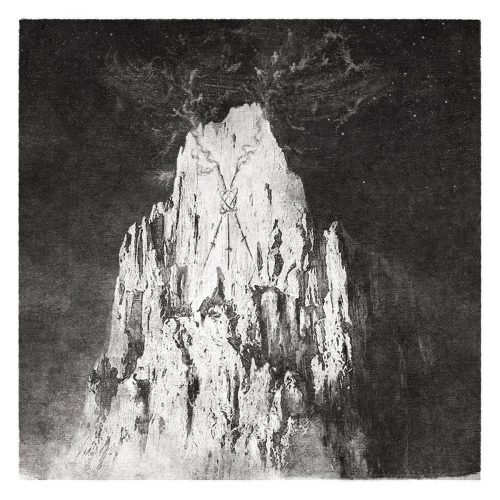 “For fans of Deathspell Omega, Dodecahedron, Fleshgod Apocalypse“. I confess that when I saw those references in the promotional materials for the debut EP by Deorc Absis, I was a bit confused, but also more than a little intrigued. After listening to The Nothingness Transfiguration, the comparisons made more sense, but it’s still very difficult to find comparisons to this music.

The Nothingness Transfiguration is instrumentally intricate, technically extravagant, frequently unhinged in its ferocity, and just as frequently eerie and ethereal. It has an experimental, near-improvisational quality that proves to be mentally and emotionally discombobulating, and the connections that tie it together seem to be established almost subconsciously. In a word (though more words will come), it’s fascinating.

Fortunately, because the music is difficult to pin down in words, we have an excerpt from the EP that you can stream today. Bear in mind that “Stasis” isn’t really a separate and distinct track, but just the first four minutes of a single composition that lasts nearly 14 minutes. And what a wild 14-minute trip it is.

To be fair, you will get a good idea from “Stasis” of what will happen in the rest of the EP. The following “segments”, “Epanastasis” and “Metamorphosis”, really aren’t separate segments but just continuations of what begins here. Yet the overall destabilizing impact of nearly 14 minutes of this eye-popping adventurousness is more significant than the effect of the first four minutes alone.

In part, the music is a riot of sound, a combination of wild, abrasive guitar machinations, which create sensations of scorching, writhing, feverish lunacy; battering, booming, and somersaulting drums; mercurial, magma-like bass lines; and crazed shrieking in the vocal department. The production has given the instruments a very balanced mix, which allows you to sense what they’re all doing — and at times what you’ll sense is that it seems like they’re all off pursuing their own missions, heedless of what their brothers are doing — and then they re-connect, locking into common rhythms or strange harmonies, only to fly apart again on some flamboyant new excursion.

It’s enough to turn your mind upside-down and inside-out, but the freakish instrumental fireworks and utter viciousness of the vocals still aren’t the whole story. As you’ll discover from “Stasis”, the music is threaded with slow, sinuous, gleaming melodies, almost like the strange reverberating wails of a viola or violin, coupled with the empyreal tones of a celestial choir. These strange, alluring sounds surface abruptly (and strikingly) and just as quickly are consumed by the violence. The result is a blend of disturbing aural chaos and unearthly mysticism, a union of berserker cruelty and ghostly luminescence that chills the skin.

The people responsible for the music are members of Italian brutal death metal acts Logic Of Denial and Sickening — vocalist Claudio Miniati, guitarist Alessandro D’Antone, bassist Marcello Tavernari, and drummer Marco Taiti, all of whom deserve a round of applause.

To repeat, The Nothingness Transfiguration is fascinating… and disturbing,,, and hard to forget. It will be released by Redefining Darkness Records (CD and digital) on May 31st. It was recorded, mixed, and mastered by Alessandro D’Antone and Deorc Absis, and features cover imagery created by Misanthropic-Art.

One Response to “AN NCS PREMIERE: DEORC ABSIS — “STASIS” (A PORTION OF “THE NOTHINGNESS TRANSFIGURATION”)”