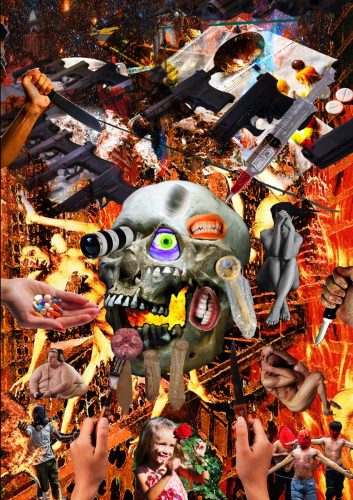 (DGR reviews, at length, the new album by the part-Swedish, part-American experimental death-grind band Ovaryrot, which was released on April 19th.)

We try our best to avoid swearing too much these days, but put politely, Ovaryrot’s latest album Non-Flesh Scarring is a fuckin’ mess.

Actually, without the help of the band themselves contacting us we never would’ve known that the followup to the group’s previous album, Suicide Ideation, had even happened. At the very least, given that Non-Flesh Scarring hit in April, the Metal-Archives page could use an update.

To be clear though, we use the phrase “fuckin’ mess” in as nice a way as “fuckin’ mess” can be used to describe an album, as Ovaryrot’s sound is a nightmarish hybrid of grind, death metal, and someone torturing the everliving hell out of some synths. Then the group add in a vocalist, because why wouldn’t you want to add to what is essentially a lo-fi destruction of sound? 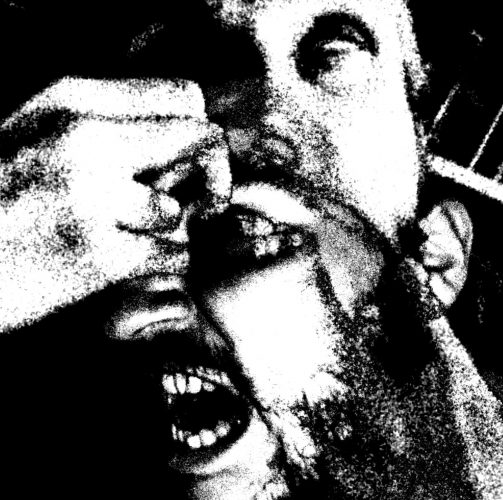 First impressions of Non-Flesh Scarring show that it is a lot like its older sibling Suicide Ideation. It is an ugly hissy-fit of noise crashing headlong into a deathgrind band who have some things to get off their chests, preferably in as inhuman sounding a way as possible. And, like a good younger sibling, Non-Flesh Scarring follows in its older one’s footsteps — which is something you really can’t avoid saying when there’s a song entitled “I Will Kill Me” sitting there near the end of the track list, because it sounds like a goddamned nightmare.

Non-Flesh Scarring punches in at a weighty seventeen songs. In what must be like the auditory equivalent of drowning, the international team behind the once-goregrind, now-fully-experimental deathgrind, project continue further down the already fairly ugly pathways of Suicide Ideation. Many of the songs on Non-Flesh Scarring stay well within the one-to-two-minute range, with the bigger centerpieces going three-to-five. Sometimes that more significant length is the group reaching for epic multi-verse songs; at other times that length comes from the nightmarish tweaking of a synth in order to create some horror-movie-quality sounds that hurt the listener as much as the instrument itself.

It helps provide some context as to what sound you’re in for when you notice that the studio where the drums — and the drummer’s vocal contributions — were recorded is listed as being “In a world of shit” on the group’s Bandcamp page for the album. There’s a lot of meat here, for sure, but the type being served is putrid, and at times downright disgusting. The Ovaryrot duo of Brady and Ulf have turned music into annihilation, and their lo-fi approach could easily serve as the soundscape for hell.

There is a temptation to dive into the innards of the longer songs on Non-Flesh Scarring, in part because it can be just as fascinating to see how Ovaryrot manage to extend song lengths as it is to see what sort of hellish-soundscape they can craft when they go for a death metal guitar and drum blast-furnace.

Songs like “Turn Back”, “Deathspiral”, and “Chemania” are short, two-minute blast furnaces that see the guitar and drums caught in very similar shit-fit whirlwinds, in which the group are screaming at the top of their lungs over a rumbling battering-ram of sound. “Wound Of The Mind” follows in similar footfalls but spends its first forty seconds of life happily bending the hell out of whatever synthesizer noise it can, before quickly drowning itself in its own murky guitar production. It crawls, ever so torturously slow, in between its two blast-movements; the reality that there’s really only about a minute-and-ten-seconds’ worth of actual music within it is mind-bending at first. Its shifts are so sudden and mood-swings so violent that the more conventional monstrous rage of “Turn Back” and the gruesome death-gurgles in its ‘chorus’ are a welcome breather.

“Fated Donor Paradox” is another synth nightmare, and its music is some of the grindiest present on Non-Flesh Scarring. The doubled-over vocals just tear their way through the song, traversing from an absolutely shrill shriek into a sewage-gurgling low all within the span of a little over a minute. It’s preceded by a song entitled “The Great Circle Jerk”, whose own two-and-a-half minutes are packed with all sorts of distorted noise, which makes for a one-two punch from the underworld.

In terms of the longer tracks, there are a couple of highlights. The previously mentioned three-minutes-and-some-odd seconds of “I Will Kill Me” are an absolute maelstrom of sound, feeling like two of the songs before it — “The Gap” and “High On Comraderie” — being smashed into one. Given the noisy production and the rapidly changing nature of Non-Flesh Scarring, even after multiple listens it’s still not clear that the snarling chaos within “I Will Kill Me” isn’t that. “Isolation”, oddly enough, actually sounds like what its title might imply. The sort of washed-out and echoing nature of all the instrumentation gives “Isolation” the sense that its protagonist is truly shut off from the rest of the world. It starts out as this insanely fast-moving song with a percussion section that is part drum kit, part aluminum trash can, but then becomes a slow and groaning nightmare of a hauntingly sung track in its back half. The drowning in miasma segment of the song that is the back half appears suddenly, as the song makes a groaning transition from deathgrind monster into a haunting drag through the mud.

Non-Flesh Scarring closes out on one of its longer songs as well, giving the honor to the five minutes of “Scarred”. It begins with a heavy sludge and doom influence, a very different take on just about every other collection of demon-screams that the Ovaryrot crew packed into the songs before it. “Scarred” even has something of a haunting melody to it as it gives way to the stomping of a gigantic leviathan of death metal. The song’s constant mood-shifting make it a pretty good snapshot of Non-Flesh Scarring as a whole, a summation of the album in a little over five minutes of multiple genres crashing into one another. Its easy to understand why Ovaryrot gave it the honor of being the closing track.

Non-Flesh Scarring is one of those albums that almost has to be taken as a whole. It’s a big ask given the impressive amount of music present here, but the album is just as much a ‘mood’ as it is a collection of songs. Given that the band introduce almost every song with some form of synth-bend and noise-mess combo, you can hear how each track was meant to flow into the next, creating one massively dense and ugly beast that throws itself into walls just to make sure it can still feel something. Non-Flesh Scarring is an expansion of the sound that Ovaryrot were firmly setting into place three years ago with Suicide Ideation, an album clearly meant to hate itself just as much as it hates everything else around it. It’s not often you find an album that you feel will make people legitimately worried for you when you listen to it, but the sort of roiling self-hatred in which Non-Flesh Scarring makes its bed could easily merit that sort of distinction.