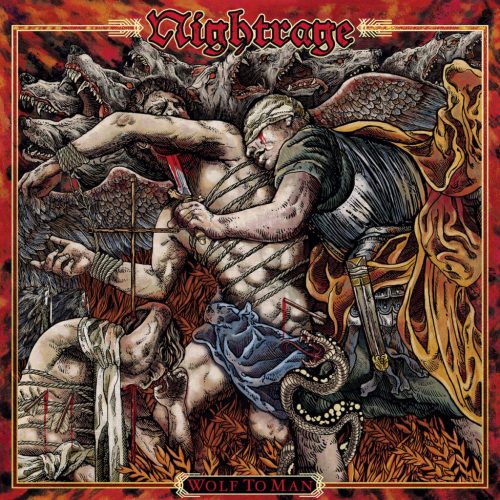 (Here’s DGR’s review of the new album by Nightrage, which is out now on Despotz Records.)

Every Nightrage album that comes out reinforces the conviction that Nightrage are a band who exist by sheer force of will. Who would’ve guessed that so deep into the band’s career they would finally have a vocalist who would stick around for more than two albums? Yet Nightrage’s Wolf To Man sets that record. Who would’ve guessed that the band’s eighth album kept them to a relatively stable schedule, with a relatively stable lineup, and (as it turns out) a relatively stable formula for music? And on top of all this, that they would manage to finally have a song mentioning the name “Nightrage” within the title? Yet Wolf To Man accomplishes all this.

Nightrage’s career is one that has seen the band go through numerous lineup changes (and even here they wound up changing the rhythm section, with a new bassist and a new drummer, as previous drummer Lawrence Dinamarca found himself busy with a newly revitalized Carnal Forge since 2017’s The Venomous), yet somehow always remain something of a standard-bearer for the mid-2000s melodeath scene, and in some ways its sound.

Always flying just underneath the radar of the more popular groups, the Nightrage crew have gone through multiple incarnations and eras, and along the way have created many excellent albums. The current iteration of the band, with Ronnie Nyman as vocalist, has been a bit scrappier sounding than previous incarnations. The group’s first album with him, The Puritan, was a knife-sharp and quick melodeath disc, and the group’s followup The Venomous was probably the first time in a long while where the band felt “comfortable”. In some ways the music reflected that: They let off the pedal a little, went a little more comfort-zone and mid-tempo with the songs, and also kicked out some solid tracks along the way.

We actually missed covering much of The Venomous beyond its initial lead-up, but it’s been interesting to watch how the band have evolved in their approach from there to the latest disc, Wolf To Man. It seems that in this case Nightrage set out with a fairly conservative approach: to iterate on what has worked for them so far, and to speed things up a bit.

The opening segment of the title track may be a better classic Soilwork bit than Soilwork have done since their embracing of the “what if ’80s prog but with blastbeats behind it?” in recent years. The rest of “Wolf To Man” is pretty reflective of the album as a whole, with the guitar duo of Magnus Söderman and band founder Marios Iliopoulos having an absolute blast on that front, throwing forward some solid-as-hell melodeath riffs and about as many guitar leads and solos as they can pack into a song.

They do so again on “Embrace The Nightrage” (the first Nightrage reference in a song title after eight albums) with the lead guitar segment during the chorus of the song being one of the most earworm-heavy things the group have written. It sticks pretty close to the patented melodeath two-step for the most part — as does much of the first batch of songs on Wolf To Man as a whole — but Nightrage have always been a fantastic sort of band for the bread-and-butter approach to melodeath, especially as Marios Iliopoulos has shown that he can write a neck-snapper of a guitar riff to keep a song moving forward whenever he needs to.

Funnily enough, its hard not to hear another one of their fellow melodeath brethren within the early part of Wolf To Man, as the brief clean guitar segments of “Desensitized” call to mind a favorite trick of latter-era Dark Tranquillity doing a very similar thing. Although “Desensitized” quickly becomes its own song after that quiet guitar and bass driven combo, with some gloriously cheese-filled guitar leads in its chorus, it’s hard not to keep flashing back to that.

It actually isn’t until the song “God Forbid” that you get a more straightforward chugging song on Wolf To Man, as the band revel in guitar-shredding glory during their first few songs. “God Forbid” is one of the few times when the group break from more traditional melodeath leanings, and the bouncing rhythms of “The Damned” a few songs later proves to be another, though that song’s brief clean-sung experiment may be firmly in the “your mileage may vary” territory. “By Darkness Drawn” brings back the guitar-heavy focus — though it doesn’t really disappear in “God Forbid” either — and also brings back the driving one-two of most melodeath rhythms, so massive fans of that style will quickly find appeal in the track’s constant assault. 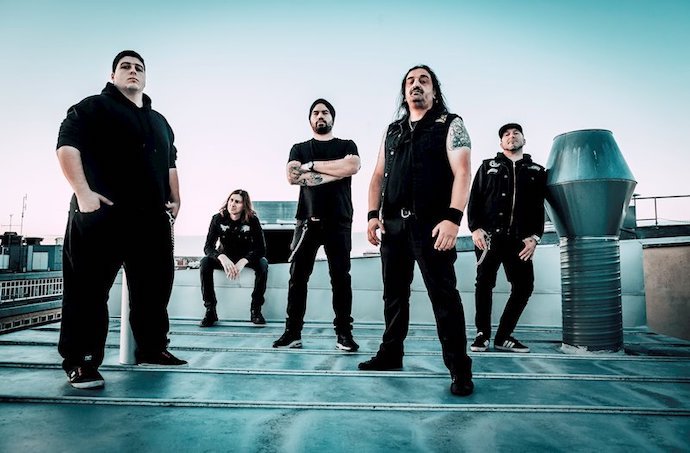 It’s hard not to notice the Nightrage crew pulling every idea from the melodeath well on Wolf To Man, including reaching into their own bag of tricks, creating a sense of familiarity that often locates the album firmly in the melodeath comfort-food world. You can’t help but see the gears turning a bit, yet you can still find yourself enjoying most of what the band have accomplished. They even manage to break out the old acoustic-closing-song move again, something of a staple for them that was brought back on The Venomous.

Wolf To Man as a whole winds up feeling like a hybrid of the group’s previous two releases, retaining a whole lot of the melodeath-comfort-food feeling of The Venomous and yet integrating some of the teeth-gnashing scrappiness that made The Puritan an exciting spin. Pulling from each of the two makes Wolf To Man a “better than the sum of its parts” album. It demonstrates once again why Nightrage have long been a vanguard for the early-aughts melodeath scene; in each song you can hear their expertise.

While they’re not breaking any boundaries, they continue to show why they earned that vanguard spot; they’re one of the best go-to’s for a classically meat-and-potatoes melodeath approach you can find, and one of the few bands who have remained so consistent in this specific songwriting style over the years and had it work out for them. The appeal of Wolf To Man is almost undeniable on that front, and thus it’s an album that’s almost perfect for genre-hounds even if there’s an overwhelming sense of familiarity to it.