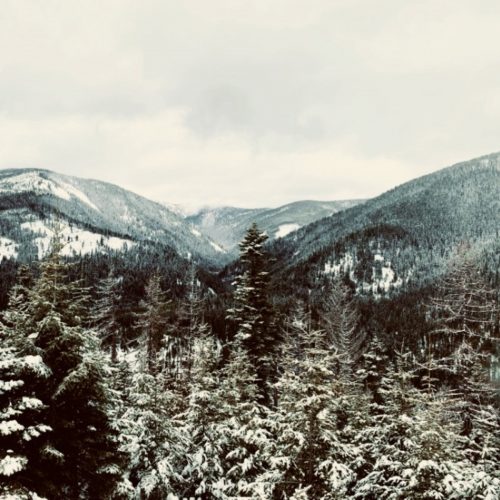 We present the vast majority of our numerous premieres in advance of the records’ release dates. To the extent there is any net benefit to premieres (a subject about which there is debate in the minds of some labels), the logic seems to be that they help create anticipation, and contribute to building “presence of mind” about the release among potential consumers as the days roll forward to the specified moment on the calendar. Yet there is something to be said for springing a premiere full-blown on a record’s release date: If you like what you hear, you can grab it for your very own without delay. And that’s what we’re doing now.

What you’re about to hear is the debut release of a Minneapolis trio named Hurter. Entitled It Will Always Come Back, it’s a 10-track, 18 1/2-minute assault on the senses that in the band’s own formulation crashes together ingredients from grind, black metal, noise rock, and hardcore. On the whole, it is an expression of harrowing emotional intensity, like tortured rioters taking hammers to the familiar storefront windows in your mind, bent on leaving them as ruined as they feel.

From the mauling sound alone, it’s no surprise that the songs lyrically deal with mental illness and an array of societal afflictions, though also expressing the defiance of believing in yourself and attempting to do what you believe is right — which of course isn’t easy. And there’s nothing easy about the music.

In many respects the sound is mercilessly mind-mutilating. The guitar generates a roiling and slashing squall of abrasive noise, accented by shrieking feedback and assorted other warping effects. The vocals are an excruciating torrent of caustic screams and throat-ripping yells that seem to hold nothing back, an ear-shattering hurricane of fury and pain that will leave you either in the throes of a cleansing catharsis or cowering in the corner. At the zeniths of the songs’ intensity, when the drummer is maniacally blasting and the fretwork becomes utterly crazed, it’s almost too much to withstand.

Eighteen-and-a-half minutes of such heights of tortured rage and anguish might be intolerable to most listeners, but Hurter have found ways of modulating the insanity, and the result is a trip that can lock you in place even though it’s an uncomfortable excursion.

While there’s plenty of drum blasting, double-bass fusillades, and blistering fills, the drummer constantly varies the patterns and shifts the tempos, integrating punk rhythms and head-nodding back-beats, and slowing the pace to complement passages when the raucously buzzing guitar moves the mood into dismal and oppressive territories. The guitarist also leavens his cyclonic sonic dementia with hammering, head-nodding chords and even a few sorcerous (but crestfallen) melodic hooks (see especially “Nutrient” and “Resilience”). And there are a few genuine reprieves in the midst of “Sensibility”, “Nutrient”, and “Day Job” when, without warning, everything softens, and clean reverberating notes ring out in moody and wistful tones before the melees of fury and despair erupt again, blasting those few shining moments to smithereens.

Of course, this won’t be for everyone, but if you’re looking for music with wrenching, cathartic emotional authenticity, delivered with brazen yet nuanced intensity, this will be a very worthwhile discovery. It’s available now on Bandcamp.