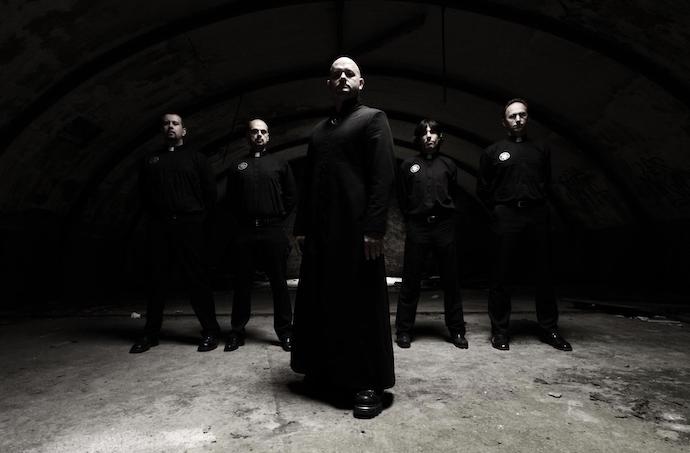 (In  this new interview our Russian friend Comrade Aleks talks with vocalist Tes Re Oth of the Belgian extreme metal band Insanity Reigns Supreme, exploring the band’s evolution in sound since the late ’80s and how their evolution will continue on the next album.)

Started in 1989, this Belgian band went a long way from good old doom-death metal to something more sinister and heavy. I would say “blackened death metal”, yet that’s not exactly that they do. Back then they had taken the band’s name from a song by the UK-based death-metal/grindcore/doom band Prophecy Of Doom, and slowly worked on their own identity. All of their four albums have their distinctive features: The first one, …And Darkness Drowned The Land Divine, tends to classic death-doom; Prophecy Of Doom represents a more rigid apocalyptic side of the same themes; and the third, Occultus Insanus Damnatus, shows the band’s interest in a more aggressive and infernal death metal sound, which was fully discovered on Unorthodox.

Insanity Reigns Supreme ideologist and vocalist Tes Re Oth will help us to learn more about their occult vibes. 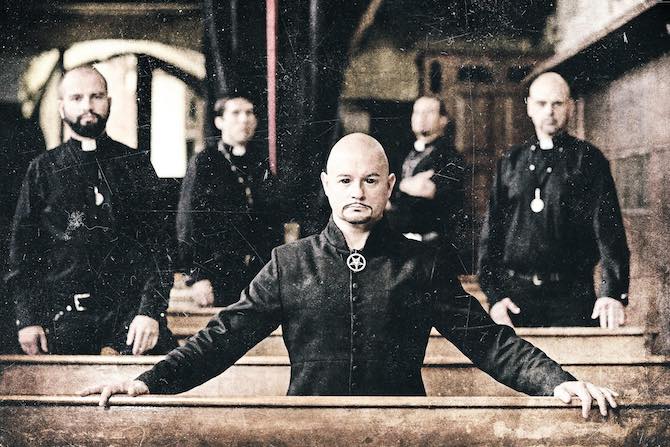 Insanity Reigns Supreme was formed in 1989. That was the dawn of the death-doom scene, so what were your main influences back then? What was your vision of the band?

First and foremost we came together as friends united by our passion for extreme metal. The different genres weren’t all established back then. We started creating music that we enjoyed ourselves, not by following any example. Also we have always worked as a band when creating music, so individual influences get mixed and you actually end up with a new entity. If there was any influence, then that would have been Celtic Frost. Not necessarily influenced by their music, but rather by their attitude to think beyond boundaries and follow your own path. An example of that was adding female vocals on our 1991 demo, which was extremely unusual at that time.

What about the Prophecy Of Doom band? Did you communicate with them in the band’s early years? That is a name that not a lot of people will remember 🙂

No, there was no direct contact with the band. Their first CD was so different that it did encourage us to push the boundaries. And obviously they have a song called “Insanity Reigns Supreme”. For us that name always meant 3 words that described the world created by man. Now more so than ever.

Your first self-titled demo recording was done in 1991, and the next demo Our Path Is Dark And Lonely appeared only in 1995. How did you spend those four years between demos? What slowed you down?

We also recorded the song “Secular Condolence” for a Belgian metal sampler called “Detonation”in 1993. Not a lot of people know about that, so it often gets overlooked. This was also a period when we were only 3 people in the band (vocals and 2 guitarists), so working on new material wasn’t that easy as we had to program the drums by hand at that time. Luckily we met up with Edward on the launch of that sampler as he was also featured with his band Tyfoon. As they had just stopped, he agreed to join our band and the new version of Insanity Reigns Supreme was born. The direct result of that new-formed band is the second demo Our Path is Dark and Lonely…, which features a more mature and darker sound.

The debut album …And Darkness Drowned The Land Divine was out in 1998. How was the sound you imprinted on this album formed? Did you have a mastermind or main songwriter in the band?

As mentioned before, we work together as a band when creating new material. This does mean that it takes a long time to develop new material. We believe however that this way we create something unique as we mix up everybody’s input into something very different. Thus it becomes larger than the sum of its parts. You will notice however that this CD has the most “Doom” influence of all our recordings. This is a direct reflection of us dealing with the loss of our bass player, who had taken his own life. An act which definitely shaped our sound and lyrical content at the time.

What are your memories about this recording session? Was it stressful or a rather relaxed experience?

It was the second time that we recorded in Beaufort Studios, as we had recorded our second demo there before. Hence we were familiar with the producer and the Studio and were much better prepared. There is obviously always some stress when recording, however it is also truly a magickal time as you witness the birth of the songs you created before in the rehearsal room. Even at that point we realized that songs such as “La Tristesse Éternelle” and “The Bitter Kiss of Death” would become references in the genre.

Prophecy of Doom saw the light of day six years after the debut release. What slowed you down then?

The way we operate means that it takes a long time anyway. Add to that, we switched bass players ,and you have the situation where you bring a totally new element to the group dynamic and its resulting sound. On the other hand, we are also very critical of ourselves, resulting in a lot of material getting discarded along the way. However we don’t believe in churning out material like a machine. It is a craft, not a technique.

Your third album Occultus Insanus Damnatus shows a clear tendency toward darker and more occult topics. What influenced you as a lyrics author? Did you have a message to transfer through your songs?

The lyrics are indeed very personal, and as such represent a reflection of the person at the time. Hence it is clear that as the individual progresses and matures, there are other topics that are “translated” into lyrics. The grieving process from before got closure, resulting in renewed energy to grow and tackle other issues that are near to the heart. The message in there was a clear separation of the Wolves and the sheep, and not to give in to the herd mentality. When you’re younger it might feel like you are the odd one out, however when you mature you realize that the herd are the odd ones out and there are only a finite number of individuals who really work on forging their own path. Put simply, there is nothing wrong with you; there is a lot wrong with them.

Occultus Insanus Damnatus seems to be the most wicked and evil thing you ever recorded. Did you write music for this album according to the darker lyrics? Did you aim to reflect this satanic vibe in the music as well?

Again, new members joined the band, resulting in the progression of a much more obscure sound. On the other hand, the reason the lyrics are so different has a totally other background. At the time of recording the plan was not to use any lyrics at all but rather vocal sounds that complement the music. Only at the very last moment when we were already recording did we decide against that. Hence you get lyrics that come more from an instinctive level as there wasn’t any time to rethink them. Also at this point, the rest of the band gave me carte blanche to write about what I wanted. So both the music and lyrics developed in that direction for different reasons. In the end however, they form a great match and complement each other as they should. 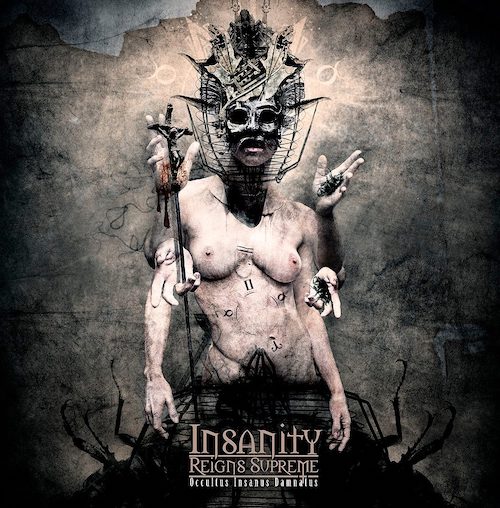 This album is close stylistically to things Septicflesh are known for, and Spiros is the author of the Occultus Insanus Damnatus artwork. Can you say that Septicflesh is a band toward which you feel a spiritual connection?

The contact with Seth has always been very good and we were honoured that he agreed to do the art for the last 2 CD’s. He understands what we are about and knows how to convey that. On Occultus Insanus Damnatus some of the first words are “I am your God, I am your new Satan”. So what you see is the physical representation of that in the form of a Goddess or High Priest. He also depicted the duality in man on the following one, where one side of the cover has the beast as the head of the body, and the other side is an even more depraved version. Subtle details that you will not notice at first. That duality is also in the music: The first song “Ov Fire” starts without female vocals, then at the end of the album it ends on a version with female vocals. This is also a a representation of that duality, the male destructive force and the female creative force. The message there is to embrace the more obscure parts of your personality as well, and actually explore them instead of repressing them. To get back to your question, we definitely have a connection with Seth. I don’t believe there is a spiritual connection to the band although their music is great.

Your most recent album Unorthodox differs, with a more brutal and diverse sound and yet the same diabolical vibe as Occultus Insanus Damnatus. Do you feel that this music is the most suitable form of self-expression for you?

With J joining on bass and him coming from a pure Black Metal background, the progression towards a darker sound on that album continued. The vibe is definitely a good representation of what we stand for today. As we have recently just had another line-up change, you will see that diabolic vibe coming to the foreground even more.

Insanity Reigns Supreme – Throne Of One

Now, when Insanity Reigns Supreme performs… let’s say death metal… Do you try to play shows now with other kinds of bands? Did you actually play gigs with doom bands in your doom-period?

We try not to make any segregation as we don’t feel there needs to be. Death, Doom, Black, it is all extreme metal music, so why not play with others. We have always shared the stage with all different bands. We still play at Doom festivals as we present a nice variation from the rest. I remember in the late ’90s we only played with Black Metal bands because it seemed that there were no other bands left 🙂

How often do you tour nowadays? Do you feel a necessity to play your songs live?

The live environment is very much a part of what we do. It is an extension of the entity that is “Insanity Reigns Supreme”. On that front we make an effort to create a totally different experience as well, hence we turn the stage into our place of worship. Don’t get me wrong, creating music is rewarding in itself, however sharing that with others in a live setting and getting that energy exchange is so unique that I could not imagine not doing that. 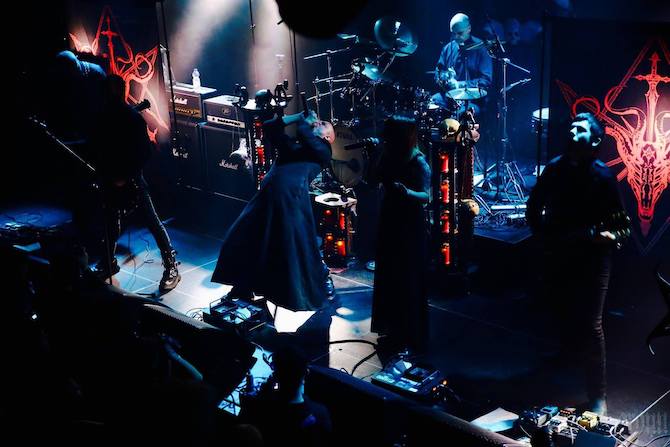 What’s the band’s current status? When do you plan to release a new album?

We are currently creating new material with our new guitarist joining the fold. After the first couple of songs it has become clear that we will wipe the slate clean and abandon the material we had written until now. With him coming on board, it seems that a certain way of compromising has disappeared and the vibe you mentioned is developed even further. You should expect to see new material from us in the coming year.

Any hints what kind of material we may expect from the band this time?

We always find it difficult to describe ourselves. If anything I would say it is uncompromising and nihilistic. You’ll have to check it yourself.