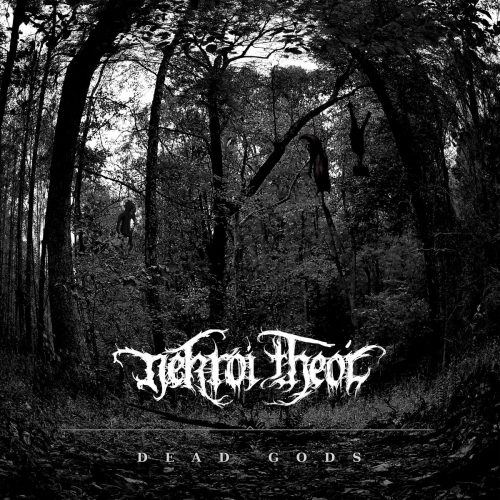 (Andy Synn wrote this review of the new album by the Floridian death metal wrecking crew NEKROÍ THEOÍ, which was recently released by Prosthetic Records.)

Last week was a surprisingly busy week for new releases, which is why you’ll probably notice that I’ve dedicated all of this week (and possibly a big chunk of the next) to catching up on some of the artists/albums which we missed.

You’ll (hopefully) already have cast your beady eyes over my review of the new Enthroned album, and now it’s time to turn your attention to this stomp-happy slab of deathly delights from Nekroi Theoi. 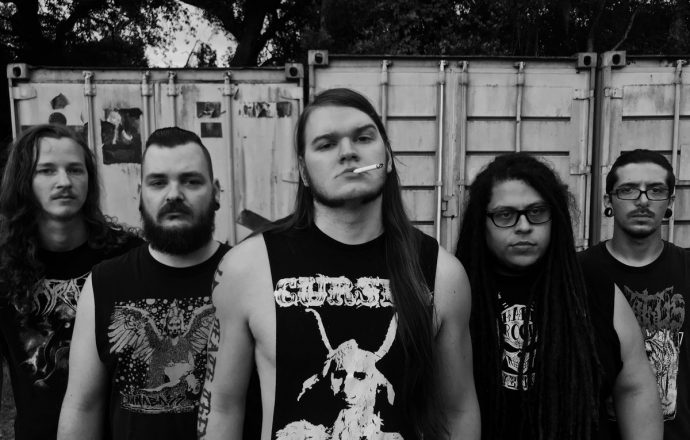 While generally tagged as “Brutal Death Metal”, the band’s pseudo-eponymous debut (“Nekroi Theoi”, translated from Greek, also means “Dead Gods”) actually straddles the line between Death Metal and Deathcore, and different listeners are undoubtedly going to hear something slightly different depending upon which side of the divide their tastes tend to fall on.

Because while there’s undoubtedly a hefty amount of frantic, finger-twisting riffs in the style of Dying Fetus or Defeated Sanity, as well as some brutish, ball-breaking chuggery that practically reeks of Suffocation, there’s also some sickening slams and humongously heavy breakdowns that recall Black Tongue and Impending Doom at their most obnoxiously heavy (not to mention the fact that the intense, didactic delivery of NT frontman J.J. Polachek often recalls the punishing polemic of ID’s Brook Reeves).

That’s not to say that Nekroi Theoi are a band simply content to imitate their idols and rivals by any means. In fact in and amongst all the neck-wrecking blastbeats and bowel-loosening chugs which make up tracks like “Swine Cull”, “Blue Shirt//White Hood”, and “Empty Glory” the band display some surprisingly ambitious attempts at complex (if occasionally a little convoluted) songwriting which help transform songs such as “The Foul Eucharist” and its similarly stunning sibling “Simony of Hollow Christs” from straightforward slabs of brutality into something much more dynamic and atmospheric.

It must be said though that the band’s ambitious reach sometimes outstrips their grasp, particularly on the longer tracks like “The Name Above All Names” and “Ancient of Days”, as while the former’s only real misstep is that it perhaps overplays its hand ever so slightly, the latter ends up feeling like an overly drawn-out arrangement of disjointed pieces which never quite coalesce into a cohesive whole.

Still, the ambition contained within these tracks is laudable enough in and of itself, and it’s hard to deny that the band really hit the jackpot on oppressive closer “Dead Gods”, whose ten-and-a-half minute mix of sombre cleans, gruesome growls, echoing ambience, and massive, malevolent riffs, recalls the very best bits of last year’s Nadir by the aforementioned Black Tongue, and really shows what the Floridian five-piece are capable of when all the cards line up just right.

In the end, as widely hyped and highly praised as I’ve seen this album be in certain quarters, it still feels a little bit like a rough draft – albeit often a very good one – that perhaps needed a little more editing and a little more polish to truly achieve its full potential. But the promise of bigger and better things is already there, no doubt about it, and even in this slightly unfinished form Nekroi Theoi already pack one hell of a punch.