Holocausto’s new album Diário de Guerra is the closing of a circle, an enormous circle of time that began moving 35 years ago. It brings this Brazilian band back to where they began, and may be the completion of a changing career as well.

The new music stands defiantly on its own, but should be considered in the context of history, too. That history began in Belo Horizonte, Brazil, in 1984 when Holocausto first began to take shape. As recounted by J. Campbell in his narrative for Nuclear War Now! Productions, which will be releasing the new album on July 31st: “Along with Sepultura, Sarcófago, Mutilator, and a handful of other bands, Holocausto played a particularly sinister-sounding strain of deathrash (or deathcore, as they used to call it in 1987), which, owing to the evil edge it exhibited, is now regarded as an early expression of the then-emerging black metal movement.” 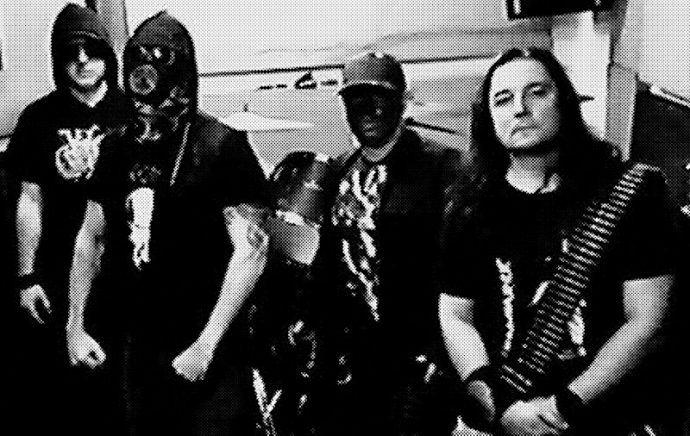 Holocausto followed their first demo (1985’s Massacre) with the Warfare Noise split the next year and then their ferocious 1987 debut album, Campo de Extermínio. But after that the circle began to turn as the band changed line-ups and made dramatic alterations of style, shifting first to conventional thrash and then (in J. Campbell‘s words) “veering into more polished, technical, and even industrial-influenced metal in the early 1990s”, followed by the disbanding of Holocausto in 1994.

Twelve years later the original Campo de Exterminio lineup (minus the drummer Armando “Nuclear Soldier”) reunited to produce their fifth album, 2005’s De Volta ao Front, which moved the circle back closer to its origin point, but still represented a mix of genres. Another long hiatus followed, and then in 2016, most of the original lineup of the band reunited to record 2016’s War Metal Massacre — which we described as “electrifying music that doesn’t sacrifice song-craft despite the destructive fury burning at the molten core of the songs — and last year brought us the Guerra Total demo, featuring the same lineup as Campo de Extermínio.

And now the circle closes with what may be Holocausto’s final album, Diário de Guerra, a record that seems closer than ever before to the classic Holocausto sound from 30+ years ago.

All of this is a prelude to the real meat of this story, which is our premiere of a song from the new album that shares the name of the band. “Holocausto” is a full-throttle scorcher, like a screaming roller-coaster thrill-ride through a furnace. The roiling, toxic tone of the guitars is a searing maelstrom of sound at first, backed by a full-throttle drum and bass assault that’s as gut-punching (and organic in its tone) as it is maniacal. And from there the song veers into thrash flurries, gouging guitar savagery, and rapid-fire bursts of unpredictable drum acrobatics, all backed by truly barbarous, flesh-boiling vocal extremity.

For a tirade of such torrential speed and bruising, berserker savagery, the song is intricate to the point that it becomes almost disorienting, but so supercharged with vicious energy that it will keep your adrenaline in overdrive while it’s spinning your head all the way around.

Nuclear War Now! will release Diário de Guerra on LP and CD on July 31st. For more info about how to get it, keep an eye on these locations. Below you’ll find both today’s premiere and a stream of the new album’s previously released title track in the same player.