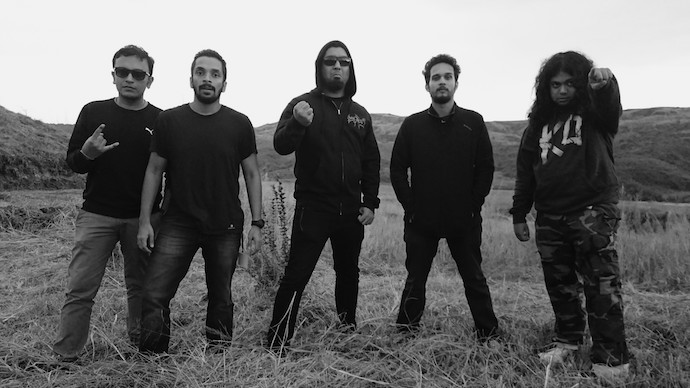 Hailing from Mumbai, India, Primitiv is a death metal band originally conceived by Riju Dasgupta and Rajarshi Bhattacharyya, who were formerly bandmates in Albatross and Workshop. The idea was to create death metal that would be extremely old school — so old school, in fact, that it would be… primitive… like an evil blend of doom and death metal from the Stone Age.

The band’s current line-up now includes three other members besides the two founders, and they too are participants in other groups: Nitin Rajan (Sledge, Morticide), Kiron Kumar (Hellwind, Colossus) and Pushkar Joshi (Blood Meridian). In 2016 Primitiv released their debut album, Immortal and Vile, and today we present the debut of a live video for one of the singles from that album — “Taurus“.

Bassist Riju explains that the song tells the story of the bull-headed God of War in a fictional universe, and that the performance in the video (recorded live at Above the Habitat by Tushar D.) marked the band’s fifth anniversary.

And yes, “Taurus” is indeed a blending of death and doom that merits the word primitive. It’s a lurching, suppurating cadaver of a track that’s queasy, dismal, and morbid, and includes a guitar solo that burns like a viral infection and enraged vocals that sound like someone caught up in the madness of a bestial tyranny. It’s also a heavy-gauge neck-bender.

Enjoy the video below, and if you like what you hear, we’ve also included a stream of the band’s debut album Immortal and Vile.