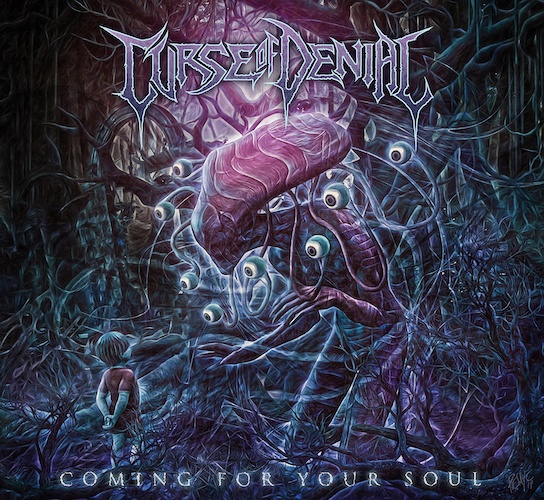 In deciding how to introduce their new album, Coming For Your Soul, Cleveland’s Curse of Denial and their label Redefining Darkness Records made a brilliant choice for a first single in advance of the album’s July 26 release. “To Carry My Sins” proves to be a wonderfully dynamic song. Over the span of its changing course it’s physically jolting, explosively powerful, emotionally cathartic, technically impressive, and melodically mesmerizing. If you’re looking for full-throttle annihilation, you’ll get that, and if you want your head pulled back to the skies by sensations of bleak heavy-metal grandeur, you’ll get that too.

It really is a hell of a song, one that not only makes an electrifying first impression but also has staying power. What more could you ask for in setting the hook for the album as a whole?

Well, how about all those eye-balls emanating from that creepy soul-sucker on the album cover? That’s a pretty good lure too, isn’t it? 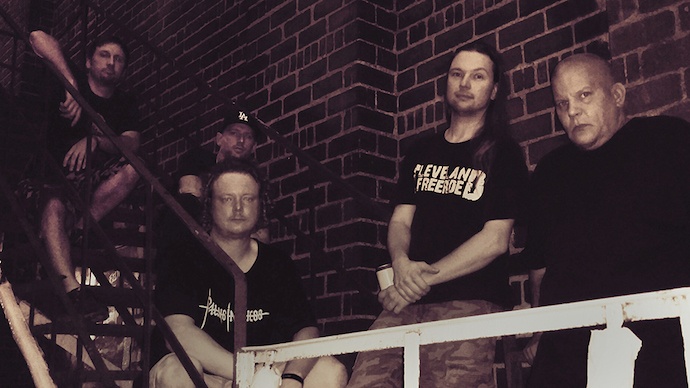 Coming For Your Soul is the second album by this veteran band, whose line-up consists of old school Cleveland death metal alumni Rob Molzan on vocals (ex-Decrepit and From the Depths), bassist Michael Perez (ex-Descend), drummer Shawn Hapney (ex-Descend), and guitarist Jeremy McLellon (formerly with the instrumental metal band Pawns in Chess). What they’ve created on the new album doesn’t conform to any one genre. Instead, they’ve freely pulled from elements of thrash, death and black metal, and classic heavy metal traditions in ways that suit their songcraft — and the result is an album that provides a changing experience across its 11 tracks.

But let’s get back to the song we’re premiering today. The band have commented: “‘To Carry My Sins‘ is just a small glimpse of the overall album, every song has its own unique personality, but this song captures almost all of those personalities in one.”

Right from the start, a darting, swirling riff gets your motor running immediately, and the song revs the engine even harder with a skull-splintering drum attack, a pulsing bass throb, scintillating splashes of frenzied, freakish, fret-leaping guitar work, and Rob Molzan‘s gargantuan, cavernous roars. The start-stop jolting pulse of the song persists, intertwined with fanfare-like chords and further demonstrations of string-mangling mania, along with livid acid screams that would make any black metal band proud.

All of this keeps the energy at a high level — until the band pull back the tempo to make way for a fluid melody that’s somber, yet creates an air of tragic grandeur, and a riveting solo. To get things rushing again, drummer Shawn Hapney creates a hell of a rhythmic bridge, and then the drums go off like gun shots, Jeremy McLellon delivers a mad, skittering riff, and Rob Molzan splits his throat with vicious screams. After building tension and anticipation in that way, the band send the song soaring to a gloriously majestic yet bleak finale, embellished with another dose of ravaging vocal intensity.

We hope you dig this multi-faceted song as much as we have. The rest of the album is well worth your time and money, too. It’s available for pre-order now — and credit for that wonderful cover art goes to Remy Cooper (Headsplit Design).

4 Responses to “AN NCS PREMIERE: CURSE OF DENIAL — “TO CARRY MY SINS””