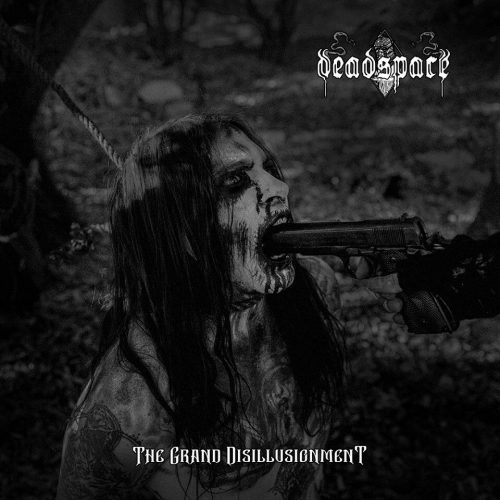 (Here’s Andy Synn‘s review of the new album by the Australian black metal band Deadspace, which was just released today.)

It’s been both a pleasure and a privilege to observe the musical progression of Australian DSBM collective Deadspace since I first stumbled across their Gravity EP in 2016, watching with ever-increasing interest as the band shifted, slowly but surely, away from the goth-inflected anguish of their early days towards a much more aggressive, much more “pure”, Black Metal approach in recent years.

However, it seems like the group’s steady transition away from their gothic/depressive roots has caused some consternation in their fanbase, to the point where they took the unexpected step of releasing a lengthy statement alongside their new album explicitly stating that they’d outgrown or moved beyond the “DSBM” label of their youth, and that The Grand Disillusionment shouldn’t be considered or judged as such.

The opening cries of agony/ecstasy which begin “Inhale the Slime”, for example, are pure DSBM sonic sadism, and vocalist Chris Gebauer makes sure to pull out some suitably suicidal shrieking later on in the song to keep this theme alive, while the sombre, spoken-word introduction to “Bones Beneath My Feet” splits the difference between morbidly macabre and menacingly melodramatic in scintillating style (even if the rest of the track is far harsher, and far heavier, than its intro suggests).

You’ll likely notice these changes almost immediately, with the guitars opening up even further than before to incorporate some increasingly dismal and doomy textures (“Horrors to Endure” and “The Ashes of the World” being perfect examples of this) and, in the process, creating further room for both the bass and the drums to take on an even more prominent role.

The latter in particular seem to have stepped up both their density and their intensity, with drummer Herb Bennetts laying down some of his hardest, heaviest beats yet, all of which only adds to the overt-aggression of the material (his blasts in “Infliction” are especially punishing).

But it’s the bass-work of Dan Jackson that offers the most surprises this time around, often taking up prime position in the mix in order to carry the main melody of the track, or weaving in and out of the dissonant, abrasive atmosphere conjured by the guitars in a way that only adds to and enhances the increasingly doomy nature of the material.

And while perhaps the primary touchstone for the music on TGD would be Nachtmystium (particularly the Assassins/Addicts/Silencing…era – see “The Funeral March” and “The Seventh Death of a Fascist Sun” for example), the mix of pure, primal aggression and bombastic, blood ‘n’ bile grooves underpinning so many of these tracks, particularly late-album highlight “Lungs”, also recalls the furious, fuck you attitude of Misþyrming, despite the Aussies and Icelanders coming from completely opposite ends of the world.

Speaking of the end of the world… the statement which accompanied the release of this album was worryingly unclear about the potential future of the band, but hopefully this isn’t the last we’ll be hearing from them. Because after hearing The Grand Disillusionment I’m more than willing to follow them wherever they decide to go from here.