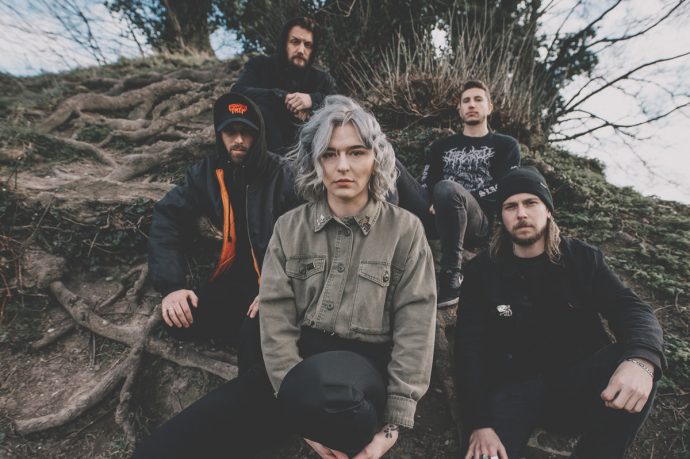 (In this new edition of Waxing Lyrical Andy Synn was able to get answers to the usual questions from Larissa Stupar, vocalist of the UK death metal band Venom Prison, whose latest album was released by Prosthetic Records in March of this year.)

You’d have to have been living under a rock for the last several years not to have noticed the somewhat meteoric rise of UK Death Metal quintet Venom Prison, who’ve only gone from strength to strength ever since they first burst onto the scene in late 2015, before quickly being signed to Prosthetic Records for the release of their debut album, Animus, and this year’s blood-soaked and belligerent follow-up Samsara.

And, despite being busy finishing up the last leg of their summer festival dates (concluding tonight at Upsurge Fest in London), as well as preparing for their highly-anticipated US headlining tour next month, I managed to catch up with vocalist Larissa Stupar and (somehow) convince her to participate in Waxing Lyrical so we could all learn a little more about the meaning behind the music.

Ever since I started singing in bands I have been writing my own lyrics. I would have been 17 years old when I joined my first band. It was a band with two vocalists in total and I was replacing one of them so I had to sing songs that were also written by other band members at the time before I was writing my own.

It didn’t take me long to realise that I didn’t enjoy words that somebody else has written because I couldn’t feel that personal emotional connection that I did with my own work, so from then on I decided to write everything myself.

To be totally honest I don’t really have a special formula that helps me with drawing inspiration. Usually I just feel inspired by real-life situations, things I read about or hear on podcasts where I think “this is fucked up, I wanna know more about it”, so I do my research and then write a song, which also helps me process information.

Sometimes I write about what I am experiencing at that time and place. On Samsara, for example, many songs deal with the way I felt about myself when I started taking medication to help me with depression. I have to say that was some of the most fucked-up experience I had because, before it makes you feel better, it makes you feel so much worse first.

So I decided to use that as a source of inspiration.

I guess you could call it some form of catharsis. Being able to release anger, frustration and emotions in the music we write is very important for me.

That’s what makes it very personal, and I remember that feeling, that deep connection, and being able to relate to songs or music in general as a listener or consumer of that music was very important for me growing up and still is today. 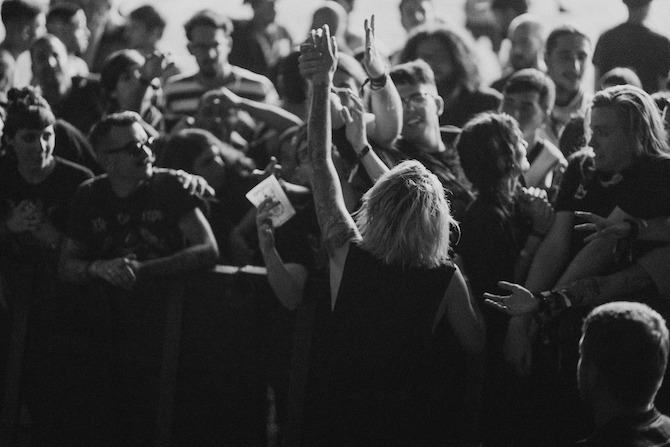 Emma Ruth Rundle, Zola Jesus, and Claire Morales are some of my favourite lyricists at the moment whose lyrics I can relate to oftentimes.

Jeff Walker and Bill Steer have got this cold and clean, almost clinical, vibe about their lyrics that gives you legit morbid feelings and is quite different from the gore stuff you’d usually hear in death and extreme metal, which I love.

When I first started writing lyrics I just sat down and wrote them, I didn’t really know what I was doing and didn’t give it much thought.

Today, a lot of research and thought flows into it, so I might end up taking a week or two to write a song from start to finish.  That’s mainly because I’m trying to avoid repeating myself in every song or record, I think that’s lazy.

I want to produce something that I can be proud of, something I can create great vocal patterns with and utilize as a tool to make the songs that Ash and Ben write into stories and emphasize them.

Sometimes I like to repeat certain things just to lay a thread and connect certain pieces, which is fun for those who care to analyse these things.

I never really used to edit my ideas and just pieced them together and make them fit onto a song. Today I tend to write with the music.

It starts with me listening to a demo version of a song, I tend to listen to it over and over again and figure out what kind of mood it will put me in, and then I choose from all the things that I decided I’d like to write about.

When I write I tend to count syllables in each line so they make sense as a melody or rhythmically.

When we were writing The Primal Chaos I was focussing primarily on the evils of humanity and their history.

The inspirations for this were biblical writings, Marxists theories, Tolstoy, and Bakunin.

The primal chaos
Mass graves of oppression
Behind the illusion of a free nation
Is organised authority and domination
Deprivation, exploitation:
Creating a product of human negation
Protect the power over the masses
Conquer and destroy everyone else

Sweating blood to serve the head of state
Born enslaved, no ones spared from this fate
Trapped in the mankind’s bond of aeons
Annihilation in the transcendent chaos
The primal chaos

As an album, Samsara is a lot more personal. I’ve been struggling with depression since I was a teenager, I used to self-harm when I was 15, and while I was able to stop myself from doing it, the urge to do it again never really went away.

When we were writing Samsara I was going through a major depressive episode and a lot of self-loathing was involved. I started taking medication because I thought I’d rather feel nothing than wanting to die all the time.

If you’ve ever taken SSRI’s you’ll be aware that your depression is going to get a lot worse before getting better (if at all) and in the first few weeks I went through absolute hell.

Do you ever look in the mirror and don’t recognise yourself?
I stare into my eyes and they don’t stare back at me
Who are you? Who lives in this body that I tried to escape for so long?
They say you realise what you had when it’s already gone

Screaming in silence, indulging in pain
Is this I, or am I going insane?

Forcing needles down my throat, internal bleeding
Is this reality or am I only dreaming?
Etched by the eternal tears of sadness
My face feels sticky as my flesh disintegrates
Who ought to save me from this madness?
A cry of anguish resonates as I dissipate

Remember the little knife you gave me to protect myself?
It’s cutting up my stomach before I stick it in my leg
My wounds are oozing woe but I feel nothing instead
Time to move on, we have no time to wallow in regret
It’s all in my head

Screaming in silence, indulging in pain
Is this I, or am I going insane?