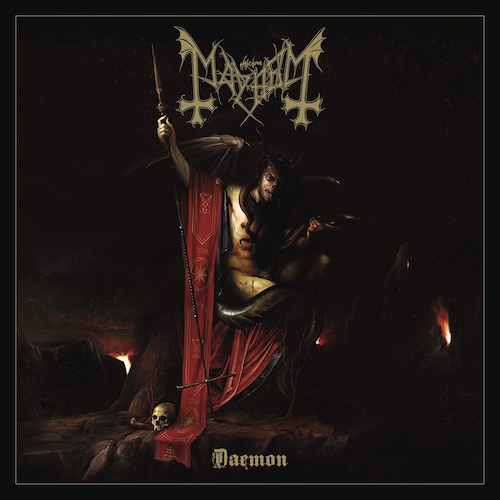 I usually don’t include new songs by the truly “big name” bands in these columns, because anyone who cares about black metal will have already discovered them, and often because there’s better stuff churning deeper in the underground. But I made an exception today, for reasons to be explained, and then moved on from there deeper into subterranean recesses. I’m kind of proud about the way the music flows in this collection. You can decide for yourselves whether, as a playlist, these selections work well together.

The Internet loves “best of” lists, especially in genres of entertainment. If you peruse any of the many web lists of the best black metal of all time it’s inevitable that you will see De Mysteriis Dom Sathanas. That release happened 25 years ago, but even if Mayhem had never recorded anything else they probably would have already assured themselves an important place in the history of black metal.

But of course they went on to release four more albums of (it must be said) uneven quality, along with a slew of compilations, live recordings, and other scattered short things, all of which together demonstrate that from humble beginnings Mayhem has mutated into a formidable business enterprise. 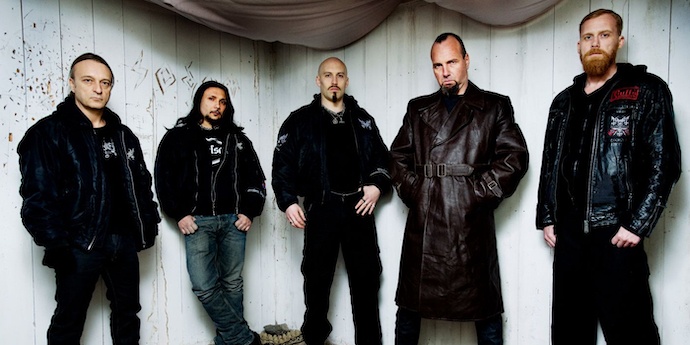 Now there’s a new album named Daemon set for release on October 25th by Century Media. Once again it includes the work of Hellhammer on drums, Necrobutcher on bass, and the vocals of Attila; newer guitarists Teloch and Ghul (who made their first appearance on 2014’s Esoteric Warfare) remain in the fold.

I confess that my own expectations for the album have not been high, but must also confess that I’m still intrigued to see what will come, because it’s undeniable that there’s a lot of talent in this quintet. The first sign from the album is a song called “Worthless Abominations Destroyed” that premiered last week, and I think it’s very good.

Hellhammer is still a beast, and succeeds in getting a listener’s pulse rate rocketing immediately. Attila‘s ugly snarls, magisterial proclamations, and extravagant cries mesh well with the arcane slithering and soaring of the guitar leads as they reverberate through the turbocharged mayhem of the rhythm section, together creating music that has a chilling and demonic atmospheric quality. The song is relentlessly electrifying, and combines viciousness and frightening, otherworldly grandeur in a convincing way.

Too soon to make judgments about the album, of course, but in my humble opinion this is a very promising start. 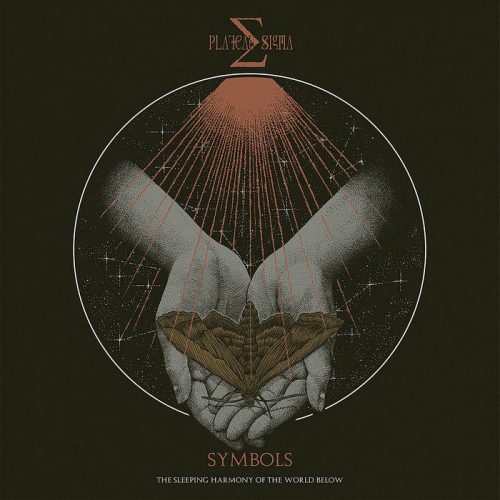 Symbols – The Sleeping Harmony of the World Below is the third album since 2014 by the Italian band Plateau Sigma, whose previous music has amalgamated funeral doom, death metal, among other influences. As the title suggests, the album conceptually explores the source and power of symbols through songs about “history, afterlife, revelations, sex, religion, science, magic, war, paradoxes, atoms, myths, dogmas, miracles and wonders”, and an effort “to capture a small hint of the pathos, the beauty and dread of existence”.

The first advance track, “A Parody of Medea“, creates an immediate contrast with Mayhem‘s new song, through subdued spoken words and slow, celestial strumming. When the syncopated drum beat and pulsing bass notes arrive, they get the head moving, while extravagant shimmering notes peal and echo in even more celestial fashion. Yes, there are clean vocals at first, which combines with the instrumentation in a way that brings Solstafír to mind.

Almost three minutes in, the building power of the music jumps to a much heavier plateau, combining brooding low-end depth with those shimmering, borealis-like guitars. To further amplify the music’s mounting intensity, the vocals turn harsh and harrowing. The pace slows, the music becomes beleaguered and crushing, and then morphs into still more permutations of darkness, channeling yearning and despair. Ultimately, the song becomes a funeral doom monolith of wretchedness, with abyssal roars further adding to the vocal variety in the track. 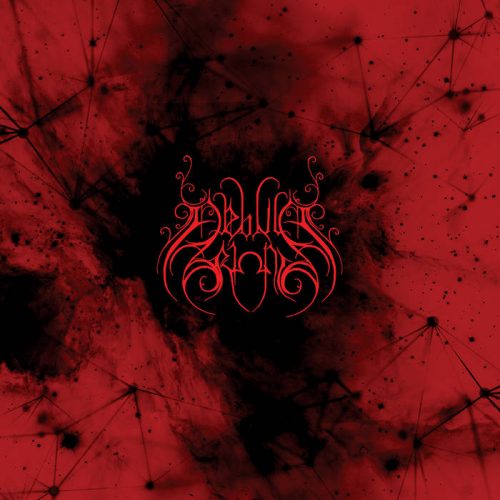 The shining ambient textures that begin the next song, “Starthrone II“, are mysterious and mystical. The mountainous pounding that begins turns the music into a bolt thrower. I don’t mean that it sounds like the band Bolt Thrower. I mean that those detonating rhythms hit like blasts from the bolt guns used to stun animals before slaughtering them. The sounds of darting strings amidst the symphonic swells create a feeling of vitality and vigor to go along with the panoramic, cosmic sweep of the synths.

But man, it’s those titanic rhythms and syncopated percussive accents that have kept me coming back to this track. Along with sprightly pinging keyboard tones in the closing sequence, they make it hard to sit still while listening.

“Starthrone II” is the opening song on Ashes, a new EP by the Russian one-man band Nebula Orionis. It adds to a discography that includes four albums and other shorter releases. Ashes will be jointly released on September 22nd by Beverina and Casus Belli Musica.

The next song here, “Sob o fio da espada“, comes from a demo tape that has been out in the world since late July. That demo, O Túmulo Frio do Esquecimento, is the debut of a Brazilian band named Martelo Perpetuo, whose unidentified member or members are reputed to be veterans of the Brazilian black metal scene. It was released by Hammer of Damnation in an edition that’s now sold out through that label. I discovered it through a recent e-mail from Signal Rex, who still has some copies left. Sadly, I haven’t found a digital offering of the demo, just the stream of this one song.

The song has really gotten under my skin, not because it’s a “catchy” or warm-hearted piece of music, but because it’s so intriguing and unsettling. Tuned to a rough and raw timbre, the opening riff creates an immediate feeling of degradation and doom. The vocals, also distorted, are the kind of intense, tortured cries that signify an intersection of pain and fury. Those opening sensations are disturbing yet strangely seductive, but the advent of melancholy keyboards and slow, cracking snare rhythms really seals the deal, creating a dreamlike but cold, vampyric mood.

The drumming does pick up the pace, shifting into a rocking gait, but those terribly anguished vocals and the cycling of that abrasive, doom-stricken riff remain desolating to any sense of well-being you might have.

I encountered Kostnatění through a previous demo (Konec je všude) that I briefly reviewed upon its release in February 2018 by Fallen Empire Records. To repeat myself

The word “kaleidoscopic” is usually what springs to mind first when I hear music as multi-faceted as this, and that’s one of the adjectives that leaped into my head when listening to the music of this one-man band from the Czech Republic. The dissonant, rapidly writhing leads are somehow both lunatic and enthralling; the slower, more fluid and serpentine movements are equally beguiling; the soloing is as bright and eye-popping as a fireworks display; the tempos are in constant flux; the vocals are terroristic.

A musician acquaintance to whom I recommended the EP commented, “Some of this has a weird retro thrash guitar tone like a cross between ’80s Voivod and Kreator.” And yes, that’s a fair point, too. Other descriptive points could also be made about this “convoluted and labyrinthian” debut (to quote Fallen Empire), but maybe it’s best just to say that you should give every song your full attention. Surprises lurk around every bend.

The new release by Kostnatění is a debut album entitled Hrůza zvítězí (“horror will prevail”). The person behind the band describes it as “a monument to death”, created during a time when he was “obsessed by my own death, constantly fighting off panic attacks relating to dying, and living in a constant suffocating dread”.

The new album’s title track is consistent with that explanation. It changes over the course of its 11 1/2 minutes. The song creates sensations of wild panic through twisted riffing, savage snarling vocals, and mercurial arpeggios that blare, shriek, and witter like mutterings in an asylum. Dread also lives within the music, a feeling created through horrid, cavernous roars, tension-torquing guitar vibrations, venomous rasps, and ponderous, gloomy, crushing lurches. In those doom-stricken movements, the soloing is the sound of inconsolable misery. However, madness reigns in the blast-driven surges, where freakish dissonance and feverish string-mangling are the order of the day.

No doubt a deeply disturbing piece of music, so much so that it haunts the mind long after it ends in the sound of slow, moaning strings, it’s also relentlessly gripping.

Hrůza zvítězí will be digitally released through Bandcamp on September 13th. The amazing cover art was created by Frank Heiler. 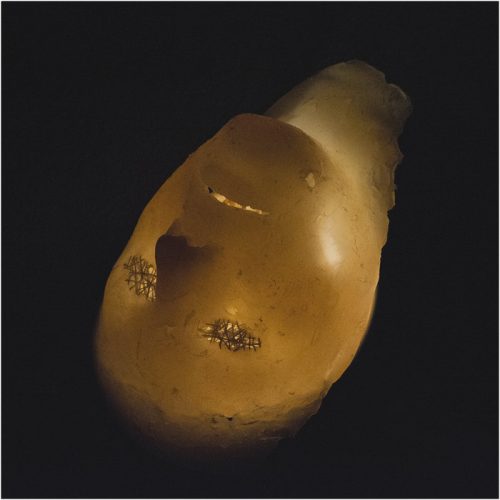 In March 2016 our erstwhile Norwegian contributor Gorger introduced me and many of our readers to the music of Gorrch through a review of this Italian band’s 2015 debut album Nera Estasi. I’ll excerpt what he wrote, because I miss his distinctive way with words:

Gorrch’s black metal is like a fire development in a chemical factory; a frantic, dirty, and polluting inferno which nevertheless explodes like fireworks in colourful effects. The music is intense, atonal, and furious, yet intricate and swirling like a tornado.

Frenetic drums crackle at an inhuman pace, but add abrupt transitions and clever variation. The vocals spit and hiss in unforgivable disgust and chant his infamous doctrine. The guitar riffs are as monotonous as an institutionalized patient rocking back and forth in a corner of a filthy white hallway of the asylum, while high-pitched guitar strings swirl as aggressive wasps.

Even the quietest sequences sound anguished and uncomfortable, something that becomes particularly evident in the title track.

Duplicate Records, who released that album, has recently informed us that they will be releasing a new Gorrch EP named Introvertere on March 6, 2020 (on vinyl and digipack CD). It’s described as “a masterclass of razor-sharp, bludgeoning dissonant black metal”.

One untitled track can be heard now, and it left me breathless. As Gorger observed, the drums batter at an inhuman pace. The mutated guitar sounds are indeed dissonant — freakishly so — and create the kind of severe frightfulness that might come from being cornered by cannibals in a madhouse. The drumming stops and starts, slows and erupts. The guitars spear out in bouts of lunacy and boil like thrashing schools of piranha with blood in the water. Needless to say, the vocalist is a barbarian.

There really is nothing sane about the song, on any level I can identify. Go back and re-read Gorger‘s first sentence quoted above. There’s also still a lot of truth to that in the context of this song.

March 6 of 2020 seems impossibly far away, but based on this track will be worth circling on the calendar.