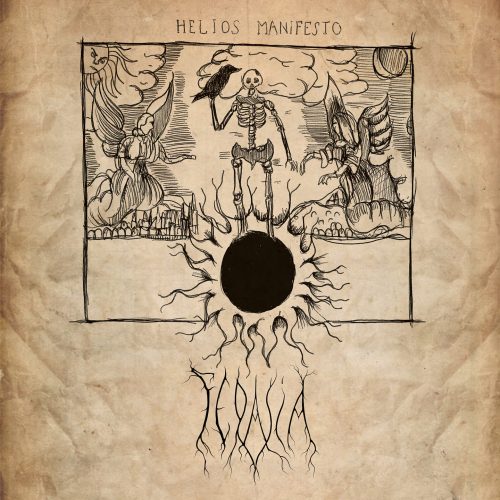 On August 11th the Italian black metal band Feralia released their first single, “Conception“, which was also the first excerpt from their album, Helios Manifesto. The album is described as “a concept that runs through the mystical / initiatory path of man as ‘god’ of himself, using sometimes Aleister Crowley and thelemic extracts to explain with images an esoteric and initiation mood”. On this album the trio of Italian musicians are accompanied by Tibor Kati (Negura Bunget, Sur Austru) as the lead singer. 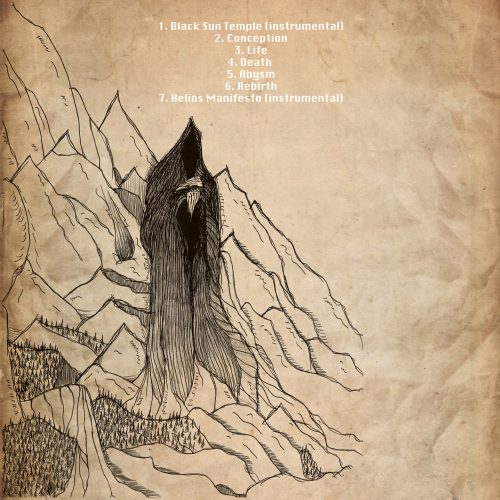 Presented through a video that provides lots of eye-candy, “Conception” whirls and shimmers, the riffing providing a glorious but unnerving sheen over potent drum-and-bass rhythms. The riffing becomes a more cruel snarling sound, matching the ugly snarls of Tibor Kati, and then extravagantly blares in caustic yet mesmerizing tones above that vibrant bass pulse. The song is an enthralling experience, in part because it continues to change, and the lively, ringing guitars that come in at about the 2:30 mark with an unusual tone, coupled with a methodical rhythmic pounding, make for a wonderful change.

The band cycle the song back through those electrifying opening minutes, re-creating that feeling of wildness and wonder while giving you a chance to bang your head silly, interspersed with the shine of additional seductive arpeggios, both bright and moody, over rhythms that definitely aren’t black-metal standard.

Thanks to Rennie of starkweather for recommending this song — he likened it to a mix of black-metal and Amebix.

P.S. More recently, Feralia released a second track from the album, “Abysm“, which I’ve included through the Bandcamp player below. It just makes me more eager to hear the rest of the album. The opening guitar harmony, doused in distortion yet somehow still gleaming and wondrous, leads into a riveting race that makes the heart pound and soar. The riffing pulses and writhes with abandon, and the rhythm section continue to do a hell of a job working the listener’s own pulse into a fever. There’s near-reverent singing mixed in with the ferocious aggression of the snarls this time, as well as harsh chants at the end. Brilliant track.

Helios Manifesto will be released by Vacula Productions (CD/Digital) and Realm and Ritual (limited Tape) on October 4th. 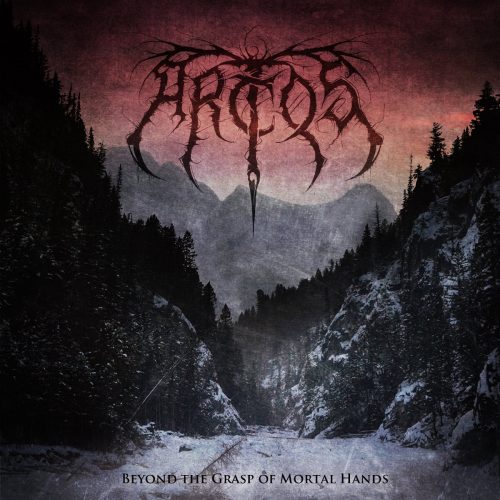 Hailing from Edmonton, Alberta, and claiming inspiration from the jagged monoliths of the Canadian Rockies, Arctos have completed a debut album to follow their 2017 EP, A Spire Silent. Their new full-length, Beyond the Grasp of Mortal Hands, will be released on September 20th by Northern Silence Productions.

Of the two songs now streaming at the album’s Bandcamp page, “The Ancestor’s Path” is the album opener, a nearly 11-minute opus that begins with the sound of washing waves and ritualistic drum pounding, with symphonic strings and horns swelling in volume, in mystery, and in grandeur. The song breaks open in a fusillade of electrifying drum blasting as the waves of sound become more searing and desolate. The rhythm changes to a head-hammering back-beat as the vocalist vents a bestial growl over a deep bass thrum and swirling guitars that have the resonance of a blizzard in the sun.

Long tracks like this one usually include a sharp divergence, and this one does, when the drums vanish to clear the field for panoramic symphonic melody that’s melancholy in its mood but also makes one imagine taking flight above vast mountain ranges devoid of human habitation. As the drums return, crystalline guitars beautifully chime, creating a spell that the band soon blow away with another race. There’s a pair of wonderful solos in the song’s back end, too, along with a continued ebb and flow of power and intensity, rocking hard and also reaching zeniths of awe-inspiring majesty that put your heart in your throat.

The other track, “Autumn’s Herald… Interitus“, employs similar ingredients, continuing to display the effects of a clear yet powerful production, harnessing dynamic (and hard-punching) performances by the rhythm section, and killer riffing. This track is shorter than the first one, and a more “physical”, neck-wrecking piece in its opening movement, with more subdued synth layers, but it includes an interlude of its own, which features deep, solemn words, and a dramatic closing movement that brings in that sense of gloom and grandeur which characterized the longer track. There’s another riveting solo in the song’s second half, as well as a solemn and deeply sorrowful symphonic and keyboard instrumental at the close. 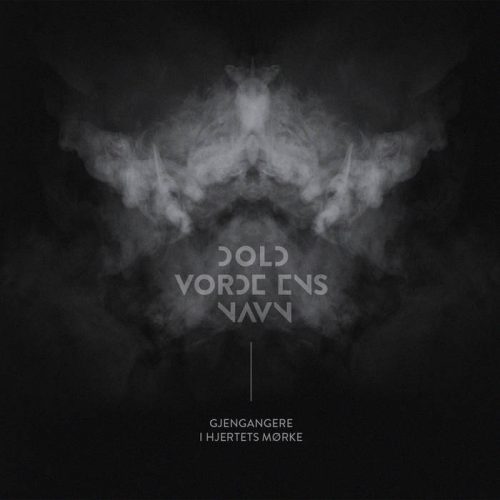 This next song is a strange one, full of surprises, and not all of them the kind that make you clap your hands in glee. I couldn’t resist listening to the song, which is the first advance track from an EP by Dold Vorde Ens Navn named Gjengangere i hjertets mørke, because of the description of the band’s line-up. It includes:

With names like that in the line-up, it’s foreseeable that the music will not be conventional or predictable.

The name of the song below is “Vitnesbyrd“. Launched immediately by thunderous drumming, the song introduces us to the contrast of truly extravagant harsh vocals and cascades of mesmerizing, otherworldly melody. The vocals grow increasingly unhinged, with crazed cries of pain appearing in the mix. The first big surprise comes when the tumult suddenly abates, and a slow, mournful piano melody becomes the accompaniment for extravagantly theatrical vocals that seem to express shattering grief (I can’t understand the words, but that’s how they sound) in tones that could be the libretto of an opera. When the drums return, we’re treated to a classically inclined acoustic guitar instrumental and choral vocals that again have an operatic level of theatricality. The musical pageant (and it does have a narrative quality) continues by mounting in intensity once again, the riffing rising and falling in delirium and grief as the drummer goes wild.

The song is bewildering but so transfixing that I’ve never been able to listen to it just once. Every time I’ve returned to it, I’ve had to listen twice, just to try to wrap my mind around what they’re doing. And that’s not a bad thing at all.

Beyond The Grasp of Mortal Hands will be released by Northern Silence Productions on September 20.

(Thanks to Miloš for pointing me to the song.) 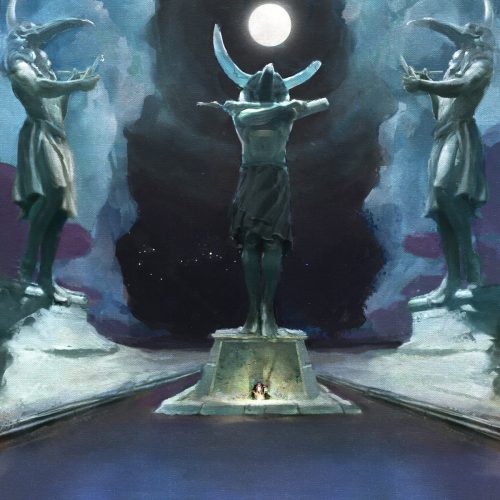 The three images of Thoth that appear on the cover of Ossomancer’s debut album Artes Magickae provide a clue to the band’s conceptual orientation, the purpose of which (as the band explain) “is to delve into the universality of god/goddess archetypes/aspects and the dynamic humanism which lies in the process of divination, syncretism, and esotericism when attempting to understand the divine”. Further, they write:

“Since this album is centered on those mystic/mythological correspondences and is the debut album for the band, it is also based on the first principle of esotericism— the initiation with the divine through will or becoming ‘the magician.’”

The creators within Ossomancer, a duo based on San Luis Obispo, California, secured the vocal artistry of Proscriptor McGovern (Absu) for two of the tracks (IV and VI) and Moon Devil for “water nymph whispers” on the fifth track.

The two songs available now, “Aeromancy” and “Scapulimancy“, come second and third in the running order. “Aeromancy” explodes immediately — the drumming in particular is explosive — and the vocals are nasty as hell, while the combined effect of the guitars and keyboards creates a feeling of magnificence (and peril). The band pound and plunder, generate grand fanfares of power, diminish into spectral, darting arpeggios, and inject long, lingering chords that are as grim and oppressive as the soaring solo is incandescent.

As the title of the first song suggests, it does have an aura of occult sorcery about it, and that same atmosphere surrounds “Scapulimancy“. The vocals seem even more fervent and inflamed, but the music also creates that feeling of terrible majesty that rose up in “Aeromancy”. The track also includes a hard-jabbing, heavyweight riff that’s red meat for a headbanger, interspersed with waves of melody and a gorgeous lead that together convey grief.

Both tracks are powerful immersive experiences that have the capacity to make you feel carried away from all that’s mundane and mediocre about daily life.

Artes Magickae will be released on September 17th by Pacific Threnodies. 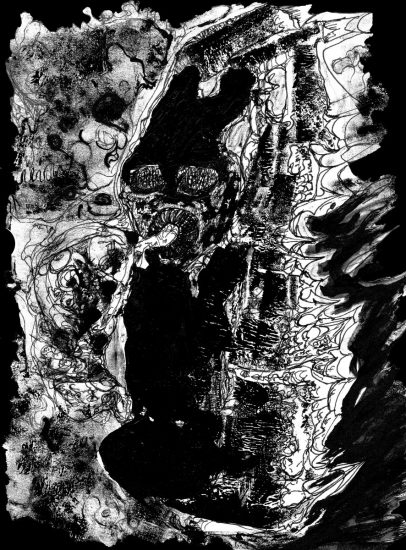 In February of last year we premiered an EP named Visitation by the Israeli band HAR, and it did indeed conjure the atmosphere of a terrifying intrusion into our own world by hungering forces from shadow realms where death reigns supreme. HAR have now followed that onslaught of frightening, otherworldly music with a new demo named Anti-Shechinah.

Not being familiar with the word “Shechinah“, I googled it and learned that it is the English transliteration of a Hebrew word that appears in rabbinic literature meaning “dwelling” or “settling”, a word that denotes the dwelling or settling of the divine presence of God. I know what the prefix anti means.

These three tracks take no prisoners. They’re relentlessly intense, although the nature of the intensity varies. At times, they seem to be fury incarnate, fusions of larynx-lacerating howls or ice-cold roars, vicious riffing, and fast-changing drum patterns. But the music also channels despair and pain in equally intense fashion, with leads that manifest misery and lunacy, and liberal use of dissonance to magnify the feeling of mental and emotional splintering.

The compositions are intricate and performed with jaw-dropping technical skill, but HAR do an excellent job organizing all their rapidly morphing sensations in a way that holds them together rather than exploding in irretrievable chaos. To be sure, they clearly know how to create terrifying audio chaos, but pull us back from the brink just often enough to keep our heads from completely exploding, and the songs do have through-lines of riffing and bone-smashing rhythms that give them individualized character.

In thinking about reference points, I settled on Krallice and Gorguts, which is intended as high praise. In a way, I’m glad this EP isn’t longer. I’m not sure I have the lung capacity for more — because this really is breathtaking.

Anti-Shechinah was released on August 19 in a tape edition limited to 50 copies. Don’t know if any copies are left, but it’s also a digital download at Bandcamp, which I have bought. The visuals are by Tim Grieco.