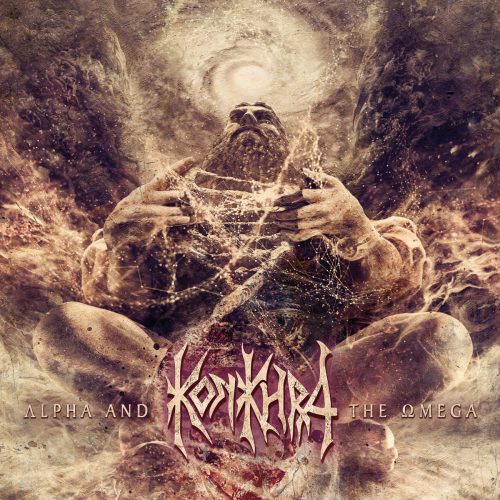 Formed in 1989, the Danish death metal band Konkhra had quite a run, releasing six studio albums, a live album, and a handful of other shorter releases from 1990 through 2009 — and then the machine ground to a halt. However, now ten years later, Konkhra have revived, and if Metal-Archives is to be believed, the current line-up dates back to the recordings of the early and mid-90s. 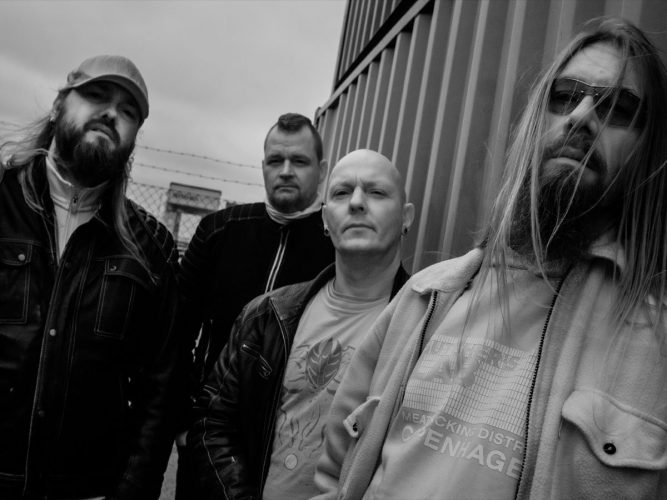 Their comeback album, Alpha and the Omega, has been scheduled for release by Hammerheart Records on October 18th, and so far two tracks have been launched for streaming. As promised above, both of them will give your neck a damned good workout.

“Thoth” has a solemn, ecclesiastical opening composed of reverent choral voices, and although that soaring vocal harmony persists, it’s soon joined by bursts of thunderous bass and battering drums — and thus the neck-wrecking begins. When the guitar joins in, the music resembles machine-gun fire, although the song shifts again into brutish pile-driving chords and squealing string mutilation, and then a frenzy of blasting drums and seething riffage. The vocals are cavernous and monstrous, adding to the song’s grim mood. And while mystical keyboard shimmers come in to amplify the music’s occult aura, the titanic grooves and automatic weaponry return as well.

The second song, “Babylon“, is also punishingly groovesome — and maniacally destructive. It will do a fine job jackhammering your skull into bleeding fragments and then make mincemeat of whatever’s left. The track is also home to warped, slithering and shrieking guitar solos, and other demented guitar accents, which add to the track’s feeling of murderous yet ecstatic derangement. It’s an electrifying romp that hits with powerhouse force.

Another song from Gatecreeper’s new album Deserted surfaced just today through a premiere at Revolver. “Everlasting” will beat you senseless but it also creates a dismal, doomed mood as its HM-2-powered chords groan and moan. The vocals veer from brutal roaring to wretched howling as the band pound and flense, batter and brawl, and inject swirling filaments of guitar misery into the bloodstream.

Eventually the drummer kicks the tempo into high gear as miasma-like waves of guitar poison wash over us, choking all the orifices. But your head will still be bobbing as you expire, so that’s all good, right?

Deserted will be released by Relapse Records on October 4th. 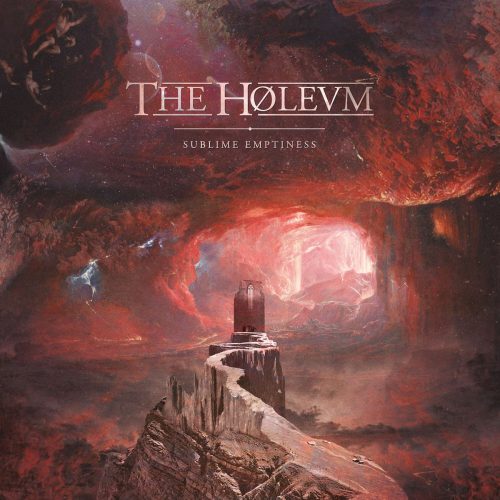 On August 23rd Lifeforce Records released Sublime Emptiness, a new album by The Holeum, a Spanish band whose dark music doesn’t easily lend itself to genre classification. As Lifeforce describes it, the music creates a tension between “post-metal and -rock, doom/downtempo, dark ambient, drone and cineastic sounds”. The label recommends it for fans of Cult of Luna, Rosetta, The Ocean, Amenra, Mouth Of the Architect, Year Of No Light, and based on the song that’s featured in this new video I would add Mastodon to that list.

The song featured in the well-executed video is “Protoconciousness“, and it passes through many different phases of sound. The light, start-stop strumming at the outset leads into a potent snare beat and heavier chords, and then cycles back to that evanescent opening melody. I feared that this was paving the way for singing — and it might well have, but when the vocal opened his throat the resulting sounds were vicious howling tirades.

You’ll discover that the vocalist’s talents are multi-faceted, as are the talents of his bandmates. The melodies in the song are emotionally affecting, but beleaguered and anguished — as well as beautiful — and the rhythm section are razor-sharp, and quite successful in getting you to move. About three-and-a-half minutes in, the band change course, slowing the tempo and pulling the music’s mood into even heavier and more desolate territory with discordant hammering (here, the vocalist’s gritty growls rise into wails).

When the pulse of the music gradually begins to quicken, the vocals become demonic rasping whispers, and the reptilian melody that surfaces adds to that feeling of satanic menace. And when the vocalist actually does begin singing in sorrowful tones near the end, I was ready for it. Great song. 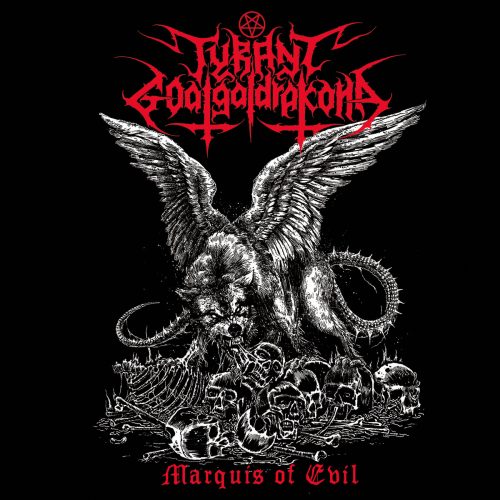 No kidding, you really better get your neck loose again for this next song. And you better expect to come back to it too, because it’s highly infectious.

This track, “Conspiracy With Marquis” is one of two on a new 7″ vinyl EP (Marquis of Evil) by the Hungarian duo Tyrant Goatgaldrakona that will be released by Blood Harvest Records  next month. At first, “Conspiracy…” is a bestial assault of thundering drums and writhing, roiling guitar abrasion, which provide a ferocious, warlike backdrop to deep, ugly gutturals. It’s an electrifying start, but one that’s just softening you up for the serious neck trauma to come.

The band shift into a methodically jolting and brutishly heavy sequence at about the 1:10 mark, and they stay with that primitive, crushing assault long enough to take command of your neck muscles. They break up that hammer-fest with further displays of frenzied savagery and a couple of guitar and bass solos, but repeatedly come back to it, determined to drive you as deep into the ground as they can.

I’ve also heard the other track on the EP, “The Seventh Throne“. It’s also terrific. 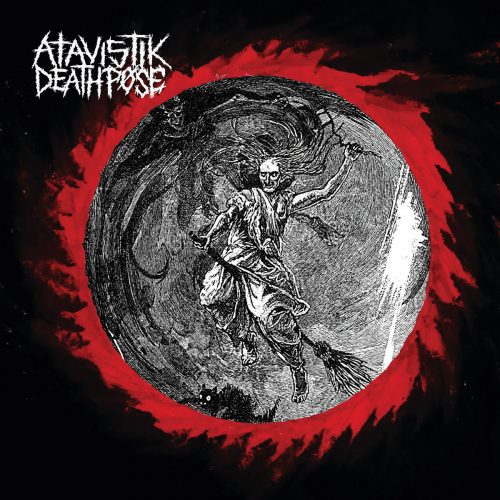 To wrap up this round-up I’ve chosen a song named “Invisible Torturer” off the self-titled debut EP by the London-based metal/punk maulers Atavistik Death Pose. The song is only a minute and a half long, but the band make the most of that time, deploying down-tuned, uber-distorted riffing and a rampaging drum attack to mount a full-throttle assault, with utterly crazed screaming and bellowing on the vocal front. When you hear the guitar bridge at 23 seconds in, you’ll probably guess what’s coming — and what’s coming is a massive head-mover of a breakdown (with a final burst of mayhem to follow up on that bludgeoning).

Nasty stuff, and, like just about everything else in today’s round-up, a big injection of adrenaline.

Atavistik Death Pose will be released on September 13th by the German label WOOAAARGH. They recommend it for fans of Celtic Frost, Hellhammer, Hard to Swallow, Septic Death, Discharge, Darkthrone, and His Hero is Gone.