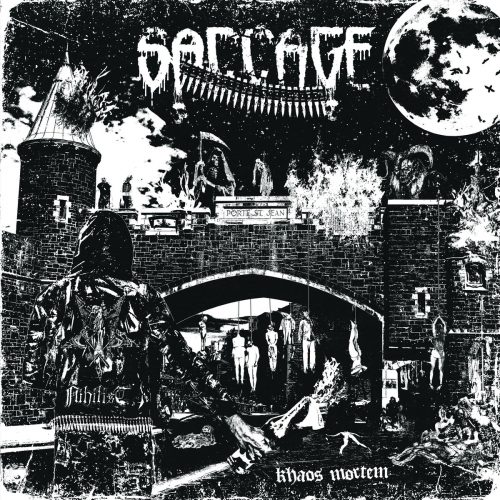 Now well into their second decade of existence, the Québec City band Saccage will be releasing their third album, Khaos Mortem, on September 20 through a triumvirate of labels. The name of their first album — Death Crust Satanique — provides a succinct summing up of their sound, but although the new album continues to lash together death metal and crust, it leans harder into the elements of death metal, creating an experience that’s heavier, darker, more brutal, more crushing — and absolutely explosive.

The new album also unmistakably displays the collective experience of the band’s members. They’re sonic executioners to be sure, but the performances are sharp as well as lethal, and the songs prove to be dynamic and multi-faceted, without diminishing the fury that propels them. We have a prime example of those qualities in the track we’re presenting today — “La Kermesse Du Charnier“. 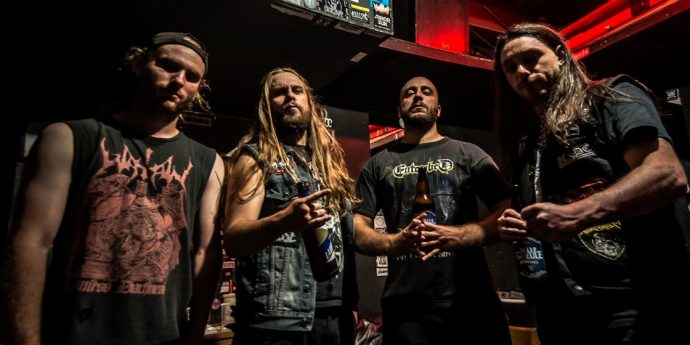 Brace yourselves before you press Play below, because this song explodes immediately — in a blast of roiling guitar abrasion, soon joined by thunderous bass, jackhammering drumwork, and a scorching growl. That rolling detonation is enough to pop your eyes wide open, and the intensity doesn’t relent from there. The drummer shifts his patterns and progressions as the riffing begins to swivel and slash, and the vocalist vents red-eyed howling rage as the heavyweight bass pulses and the guitars swirl and savage, dart and drive.

The music has a bleak, brutish, gut-punching quality, yet it’s also highly volatile — and nuanced in the way it wrecks and rampages. Filaments of eerie guitar melody shine through the barrage like phosphorescent flares in a storm. The tempos and rhythms continue to change, without letting you down from the obliterating high, and the vocals are ceaselessly furious. All in all, it’s a powerhouse track that’s not easy to leave alone after only one listen.

Khaos Mortem will be released by PRC Music on CD, by Torture Garden Picture Company on 12″ vinyl, by Suicide By Cops Records on cassette tape, and as a name-your-price digital download via the Saccage Bandcamp. Check the links below for how to order, and also listen to the previously released track “Souillure Spectrale” along with the one we’re presenting today.