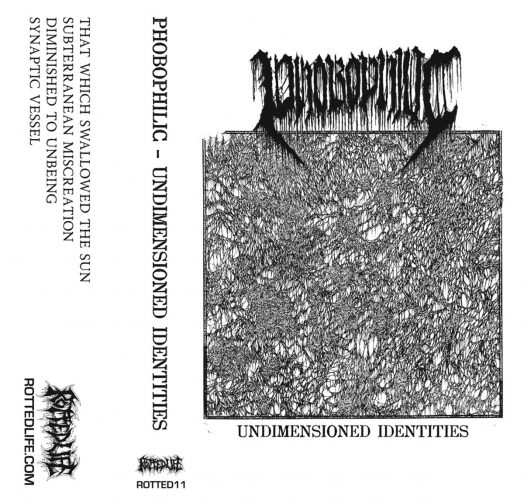 Like many (but not all) music writers, we prefer to concoct our own impressions and descriptive phrases for what we hear rather than lazily falling back on the PR verbiage that accompanies the music we receive, which isn’t exactly a disinterested assessment to begin with. On the other hand, sometimes the PR material nails it. A case in point: the press material for Undimensioned Identities, the impressive second demo by Phobophilic from Fargo, North Dakota. As recounted by Rotted Life Records and Blood Harvest Records, who will be releasing the demo in the U.S. and Europe, respectively:

“Undimensioned Identities is a tilted and deranged-enough variant of old-school death metal that it’s clear the four-piece are more focused on looking forward than backwards. Propelled by protean and corkscrewing riffs, the four tracks here are crafted with methodical precision, evoking majestic Lovecraftian horrors and creating cataclysmic maelstroms of madness and rot, while delivering a skillfully enunciated performance with a detailed production that never slips into the brackish sonic murk that’s typical of newer bands schooled on the seminal Incantation sound”.

Some nice turns of phrase in there, and better yet, it’s all true. Of course we have some words of our own, but better yet we have the premiere of a song from the demo named “Diminished To Unbeing“, presented through a video of the band’s performance of the song. 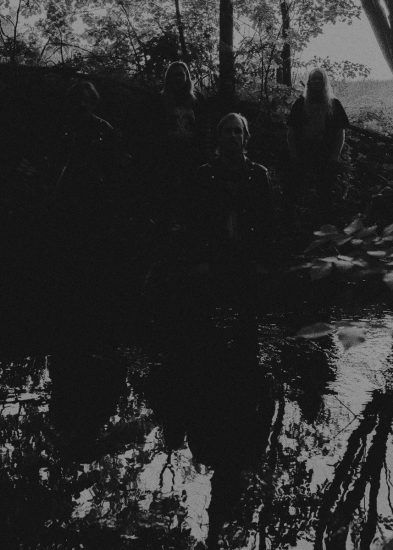 This new track is a (mainly) full-throttle rush, amalgamating technical flare and brutalizing punishment, sinister derangement and ebullient savagery, sickening disease and indefensible doom. Which is to say that a lot happens before the song ends. It’s a rapidly changing speed demon of a song that includes flurries of vicious, seething chords and battering drumwork, as well as fast-darting fretwork and bleak, insectile swarming, intermingled with threads of queasy melody and bursts of fiery, thrashing barbarism.

As vocalist/guitarist Aaron Dudgeon expels gruesome roars, the rhythm section of drummer Vincent Tweten and bassist Christian Alm engage in interesting interplay with the guitarists (Dudgeon and Josh Poer). To break up the technical fireworks, the band slow the pace as Dudgeon’s monstrous bellows echo around the inside of your skull, turning the music in both a more oppressive and a more compulsively head-moving direction, while providing the rhythmic foundation for a slow, slithering solo with a sickly aura.

The music sounds demonically mad… but the video reveals that the performers seem to be human beings intent on proficiency of execution, not hamming it up, but just doing their thing — and doing it very well. Credit for the video goes to Adam Tucker at Signaturetone Recording, who also tracked, mixed, and mastered the demo.

Rotted Life and Blood Harvest are releasing Undimensioned Identities on tape, with a release date of September 13th, and you can put in your order via the links below. For your further listening pleasure we’re also including the stream of a previously released track, “That Which Swallowed the Sun“, along with today’s premiere. Enjoy!

2 Responses to “AN NCS VIDEO PREMIERE: PHOBOPHILIC — “DIMINISHED TO UNBEING””