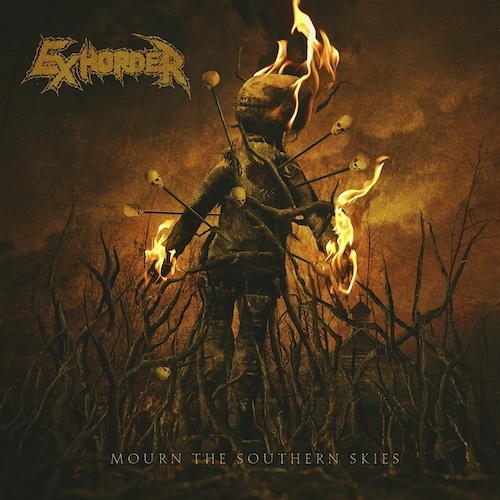 (In this post TheMadIsraeli reviews the first album in 27 years by NOLA’s Exhorder, which is due out September 20th via Nuclear Blast Records.)

I think if you’re Exhorder, you’re aware there’s an immense weight of expectation upon you in making a comeback.  Many classic or genre-defining bands have tried comebacks, especially in this last decade. Carcass did it and released what was IMO a pretty mediocre album that grasped at the straws of their former glory. At The Gates came back and have released two albums that were so good and consistent it was as if they had never left. A lot of us I know were pretty eager and interested to know how Exhorder would choose to go about a comeback of their own.

Exhorder may be aware of expectations, but as I hear it, Mourn The Southern Skies is a mission statement of a band who simply doesn’t give a fuck about what people expect from them. 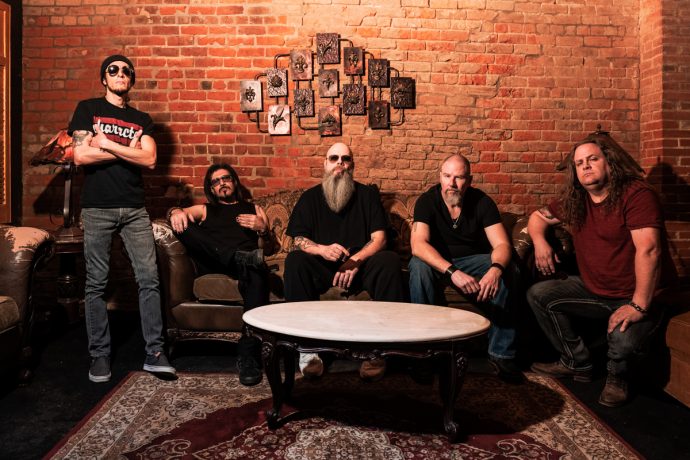 The borderline-chaotic brand of frantic death thrash that personified this band is completely gone, replaced by a swagger-filled, technical-riff-driven style of thrash metal, driven by a NOLA sensibility and with a borderline proggy and power-metal edge. Kyle Thomas’ vicious snarl is also gone, replaced by a wall of sound vocal style that really strikes a chord of Symphony X’s Russell Allen. The band hit you time and time again with a slew of intricate riffs that call to mind Symphony X once again, as well as Byzantine, Lamb Of God, and other similar influences. I really like what they decided to do here. It shows grit for a band to run the risk of blatantly disregarding the pursuit of past glories to do something not only new, but also thoroughly modern.

Opener “My Time” really strikes a Byzantine sort of note, which is funny given that Kyle Thomas worked on a “Legions Of Death” cover with Chris Ojeda on his Black Cap Miner project. It’s blisteringly fast, with effective fluttery riffing and frantic drum blitz’s. The album really kicks off though with its second track, “Asunder”.  Pure southern swagger and modern technicality meet here in a song with propulsive groove and super-active riffing which show the band totally locking dead-center into this new sound.  “Hallowed Sounds” follows suit with the same sort of formula, but the groove overload is broken up by the fast and furious “Beware The Wolf”, which frankly could have had James Malone’s vocals on it come out close to an Arsis song.  On the other hand, the seven-minute drag of “Yesterday’s Bones” is a bit of Crowbar meets Extol in an oddly cohesive slow-paced trash compactor with a jazzy enigmatic outro quite out of character from what you’d expect of Exhorder.

It’s really hard to listen to “All She Wrote” and not hear (again) a thorough Byzantine influence; even Kyle Thomas’ vocals hit Chris Ojeda vibes quite a bit. The riffing on this particular song is just on-point — tight, active, and slick, with a bit of hair metal brand wild style to it. “Rumination” also hits that same thrash-meets-metalcore sweet spot with a darker song that completely forsakes the Southern tendencies for something that’s just plain ugly. It’s the best song on the album next to “Asunder”.

“Arms Of Men” is another fantastic song driven by that signature NOLA drag, built once again on the foundation of technical, active, hook-filled riffing that carries this album.  The next song, “Ripping Flesh”, is the only time Exhorder bring out a song that channels Slaughter In The Vatican and it’s fucking beautifully grotesque. Fast as fuck, with the same skin-flaying technicality their old material was known for.  Pretty cool bone thrown to fans.

The album’s finale, the title track, is a dynamic, progressive, borderline Southern doom, ten-minute epic. It’s so good in a way I can’t completely articulate, you’ll just have to hear this song. It’s fucking stellar. All the riffs are sick, the melodic transitions are otherworldly, and the overall vibe of it is dirty yet celestial.  It’s a fantastic closing song to a pretty diverse and expressive album.

What Exhorder did here I think is the best-case scenario for a band making a comeback after being out of the game for so long. To break free from the chains of your past, do something new and foreign to you, AND for it to be front-to-back killer.  Your tastes may vary, and it will take more time to witness the widespread reaction to the album among fans, but for me this is definitely a Top Ten most confident comeback record from an old metal name, and I love it to fucking death.

Some will surely be bitter and upset that this album isn’t simply Slaughter In The Vatican PT 2, and of course you’re free to dislike it if that’s what you wanted, but I do feel this album was made for the fans of this band who understood that their first two albums represented being ahead of their time. They wrote material that influenced modern bands well into the 2000s. With that understanding, it’s only fitting for them to come back, adapt to what’s in the now, and make a killer record doing it.  Mourn The Southern Skies is an excellent addition to Exhorder’s legacy as a genre leader, and just an overall fantastic extreme metal record.