If you’re unaware that Unspeakable Axe will be releasing a new Ripper EP on September 30, that means you haven’t been checking in with us every day (shame on you!). We’ve written enthusiastically about the first single from that EP here, and we’ve also reviewed the EP as a whole. In a nutshell, it’s fantastic. That should come as no shock to anyone who’s familiar with this Chilean band’s previous work, but what might be surprising is how much further they’ve spread their prodigious (dragon) wings through these five new songs.

The name of the new EP is Sensory Stagnation, which is an interesting title, because the music is instead the antidote to sensory stagnation. It’s hard to comprehend how anyone could be bored with the state of metal these days, though some über-elitists profess to be. But for any benighted souls who do think metal is stagnating, Ripper’s newest offering will wake you up just as effectively as taking a seat in Old Sparky and riding the lightning. As proof of that, we’re following up the EP’s first advance track with a premiere of the title song today. 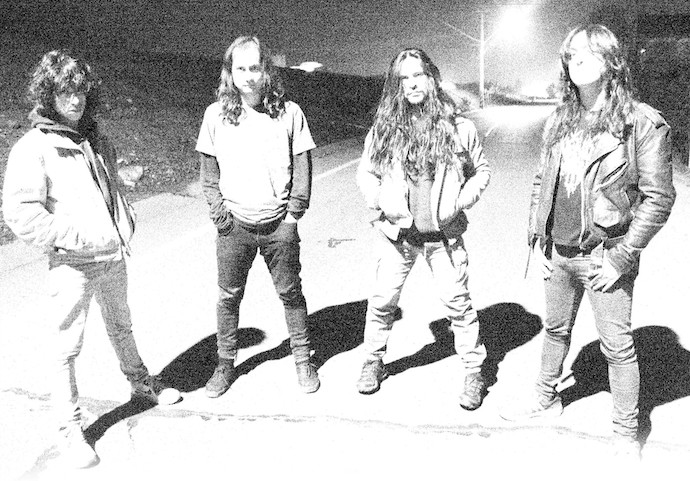 As Todd Manning wrote of the new EP in his NCS review, “All the previous influences are present — vicious high-speed riffing a la early Kreator and Sodom, with dashes of Dark Angel and early Pestilence as well — but the technical aspects of the music are more prominent in these songs. Make no mistake, the feral attack remains completely intact, only the alchemy of the elements has been somewhat altered.” He observed that the first single from the EP, “The Unreal“, gives “a true tip of the hat to the classic mindbending sound of early Atheist“, and that level of adventurous intricacy is a hallmark of the EP as a whole. Todd also made these observations about the song we’re premiering today:

“It keeps things fierce and fast. Imagine early Kreator being covered by Watchtower and you might be honing in on the Ripper sound. And while the promo material name-checks Atheist, it is just as appropriate to mention Sadus, who also constructed technical Death Thrash, and at least on Swallowed in Black, they stood with the best of them. And while Sadus had Steve Digorgio on bass, Ripper has its own bass virtuoso in the form of Pablo Cortés, whose awe-inspiring lines are a constant throughout this release.”

Cortés, of course isn’t alone. The fretwork of the band’s dueling guitarists on this track is downright maniacal — as fast as lightning and just as unpredictable. The spidery sound is definitely vicious, but completely exhilarating in its riotous extravagance. Drummer Nicolás Villanueva‘s performance is equally breathtaking, not merely keeping pace with the full-throttle pace of his bandmates but turning in his own tour de force of thundering, fast-changing acrobatics. And the vocals add a final element of raw savagery.

The complexity and technical feats of daring-do in the song take your breath away, but what elevates the song to an even higher level is the skill with which Ripper have somehow managed to make this brain-boggling thrill-ride so coherent. They’re riding the lightning for sure, but they also haven’t forgotten the power of the riff.

Below you’ll find pre-order links for one of the year’s most thrilling releases, and we’re including a stream of “The Unreal” along with a first listen of “Sensory Stagnation“.

One Response to “AN NCS PREMIERE: RIPPER — “SENSORY STAGNATION””