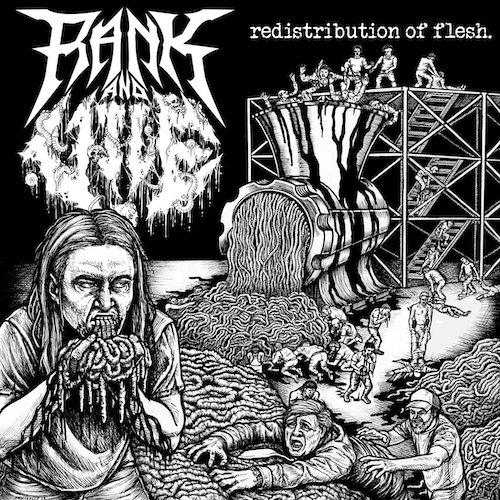 The band is Rank and Vile (a nice play on words). The name of the song is “killdozer.” — intentionally lowercase, the period intentionally inserted at the end, just like all the song titles on their new album redistribution of flesh. (same with the album title). Regardless of punctuation choices, the song title is absolutely accurate. It is an audio killing machine, as heavy as a bulldozer, but capable of moving with the speed and agility of a big cat chasing prey on the savanna.

This death-grind unit from Portland, Oregon, only came together last year, but the newcomers aren’t tyros. And they already seem to have a very clear vision for their music, which pulls influence from the sounds of bands such as Entombed and Gatecreeper, Rotten Sound and Megrudergrind, and Black Breath. The results of their work turn out to be savagely mauling experiences, and big adrenaline triggers. 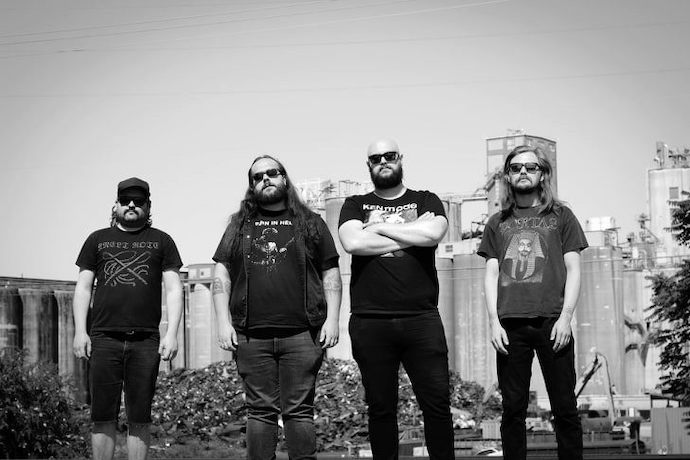 “killdozer.” is a prime example of their handiwork. It’s only 1:40 long, but will not be penned up or forced into a straight-and-narrow path. The pacing and energy of the riffs mutate continually. The drumming is furious, and then slow and methodical, and then given to stop-start jolts. The downtuned, heavy-weight, chainsawing riffs alternate between blizzards of toxic waste, bursts of jackhammering, the slow moaning of festering rot, and feverish, writhing tones that manifest derangement. Not to be outdone by the instrumentation, the vocals are a changing cavalcade of horrid roars, bestial howls, and noxious strangled shrieks.

Savagery and a taste for slaughtering mayhem come through loud and clear in the song, but the riffs are real, the grooves are punishing, and the guitar tone is deliciously foul. As a result, “killdozer.” is fiendishly addictive — just like everything else on this album. If you doubt our word, check out the title track, which was the first one released from the album in advance of its release. We’ve got a stream of that for you, along with today’s premiere.

redistribution of flesh. will be released on October 18th, and it’s available for order now.