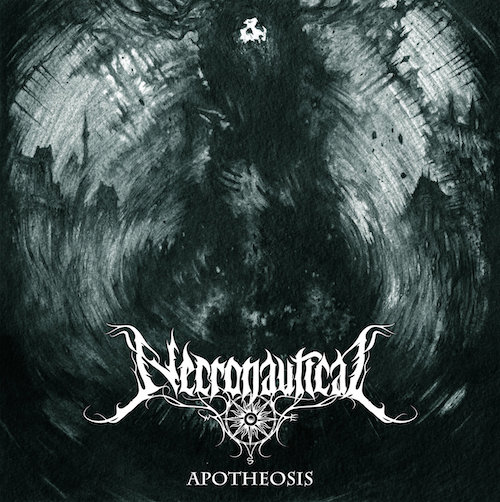 (After a hiatus due to personal obligations, DGR returns to our devoted cadre with this review of the new album by the UK band Necronautical, which will be released by Candlelight Records on CD and gatefold vinyl on September 30th.)

It’s funny that in total run-time, black metal group Necronautical’s latest album Apotheosis is actually two minutes shorter than its predecessor, The Endurance At Night. There exists a temptation after a few spins, to describe Apotheosis as a much bigger album than its predecessor but in terms of actual time spent that is clearly not the case.

Apotheosis marks Necronautical’s third foray into the black metal void, adding their own cinematic and melodic flourishes along the way. It is also the group’s third album to feature seven songs, re-establishing one of a handful of patterns now recognizable throughout Necronautical’s music. 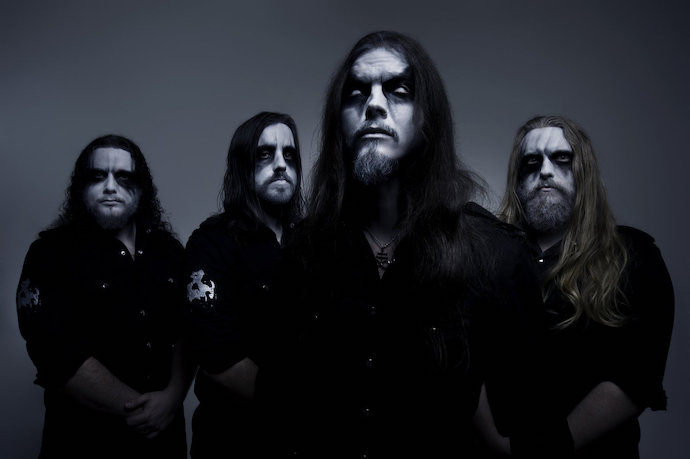 What the group’s previous album The Endurance At Night represented was a whole lot of possibility; for all of its fifty-two some odd minutes of music, they really reached for the stars and pushed their formula in a wide swath of directions. It was a disc that contained almost melo-death riffing at times, as well as huge symphonic swells and even doomier segments in addition to a couple of its songs either nearing or clearing the ten-minute run-time.

From there, Necronautical could’ve picked any of the numerous directions in which they flung their songwriting appendages, and Apotheosis represents one such choice, bringing the band back for its most dense, focused, and cohesive album yet, with each of its seven songs averaging out to a little under seven-and-a-half-minutes of cinematic overture and guitarist/vocalist Naut running his vocals ragged.

Following a group for a while and being familiar with their output can often lead to moments of discovery within newer discs that feel like sensing exactly where the band chose to pick up from the previous release, as if seeing a fully grown tree and knowing exactly what the seed of inspiration was that led to it.

Apotheosis plays its hand early on and reveals itself as the natural progression of the back half of The Endurance At Night — – those tracks from the ten-minute epic “Strom” to the doom-laden overtones of “Theia”. Necronautical make it an early mission on Apotheosis to fashion every song into its own little mini-epic. In doing so they find room to move not only from mid-tempo black metal groove to full-throttle hellfire-and-brimstone blasting, but also bringing in multi-faceted choirs to back up the occasional clean-sung moment. 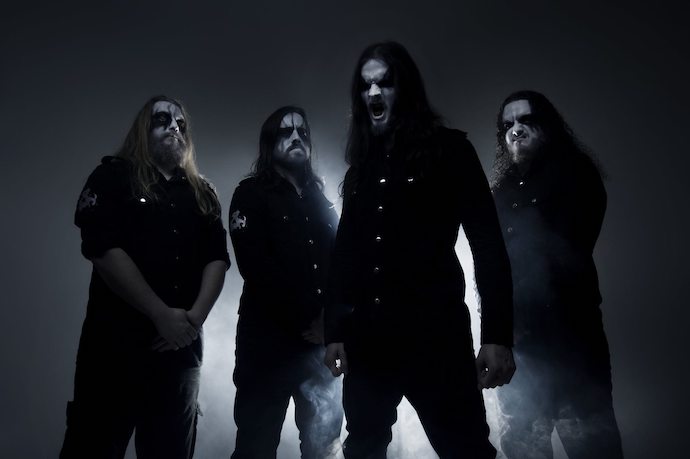 They pack a lot within Apotheosis‘ expansive fifty-minutes, and because of that, the album does feel a little less quick-moving than its predecessor’s opening numbers. It becomes one densely packed block of music, and so the adventure lies more within the exploration of each song than it does the immediate gratification of something catchy from moment one, like the speed and headbanging vortex combo that was “Nihilarkitel” from the group’s previous release.

Apotheosis is an album of “more” for the Necronautical crew. The band aim for a large sound after already getting pretty ambitious on previous releases. For those who want to hear the band be “more” black metal, the group play into what forms the core of their genre choice for much of the album. The vocal work sounds like it was recorded in a cavern, with a hefty echo behind each word uttered, and the band give themselves to many a black-metal bombing run throughout the whole of the disc.

Album opener “All Is Vanity” takes on the job of laying out the Apotheosis blueprint with ease, covering a good variety of what Necronautical aim to do with the album. Packed with a multitude of riffs — chief among them a swaggering, mid-tempo guitar groove during its chorus as it builds to a sudden stop/start dynamic — “All Is Vanity” feels like a large song from the get-go. It has a multitude of layered instrumentation running throughout it, and although it doesn’t stay hellfire-and-brimstone blast-heavy for super long, it serves as a good introduction for an album that is.

Its immediate follower, “Nihil Sub Sole Novum”, picks up the more traditional black metal flavorings as it drenches its multitude of bombing runs, brief clean sung moments interspersed throughout, and cavernous shrieks in a layer of horror movie aesthetic — its opening keys especially sounding like an off-kilter organ during a religious meeting. It’s also something the band themselves lean into pretty heavily with the music video’s found-footage-take on the song’s time of a little over seven minutes. 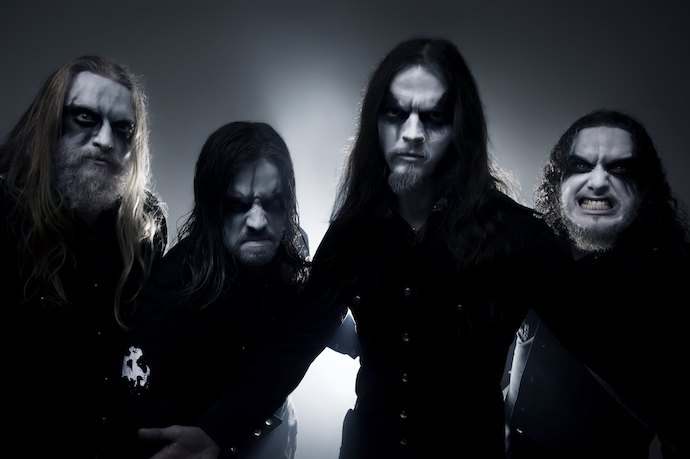 There’s a temptation to want to touch bases with every song on Apotheosis due to their dense nature, leaving a ton of material to explore and chat about. “Lure Of The Abyss” brings back the grooving black metal for a bit before becoming one of the more traditional black metal songs on the album, but truly, where Apotheosis earns its keep begins around the title track, where things take a turn for the cinematic.

That is also where Necronautical really start leaning into the extended intros — which pop up again and again during the record’s’ closing four songs. “Totentanz” and album closer “The Endless Spiral” run in similar veins, adding their own spins to the massive black metal maelstrom.

“Totentanz” is a slower song, as each movement lumbers, a mid-tempo drum march moving the music forward with a light backing doubling of the vocals and an ominous keyboard passage to make things heavier.

“The Endless Spiral” was always fated to get some words as well. With its eight minutes, and then some, run-time, “The Endless Spiral” allows plenty of room for Necronautical to throw everything they have at it. It earns its place as the send-off to an album that seems to be bursting at the seems. “The Endless Spiral” traverses multiple movements and is the summation of nearly-everything that Necronautical have broken out throughout Apotheosis. There’s a dense back half, as every vocal element the band have comes into play and the song shifts constantly from a slow and lumbering groove to an all-out percussive assault, before moving back to its slow groove and with a gorgeous guitar lead woven throughout.

It starts fast and rarely lets up from there, so that by the time you reach the song’s mid-point, and the band move from the rapid-fire blastwork on drums to a slightly slower rhythm segment that seems to veer back and forth, your face will have already been sandblasted down to just a skull. On an album full of sweeping orchestral arrangements (usually placed subtly behind the band), epic song lengths, and ambitious writing, “Here Begins The Fall” wins out just by sheer simplicity and standing in stark contrast to an album that already feels “huge”. It makes six minutes fly by like nothing. 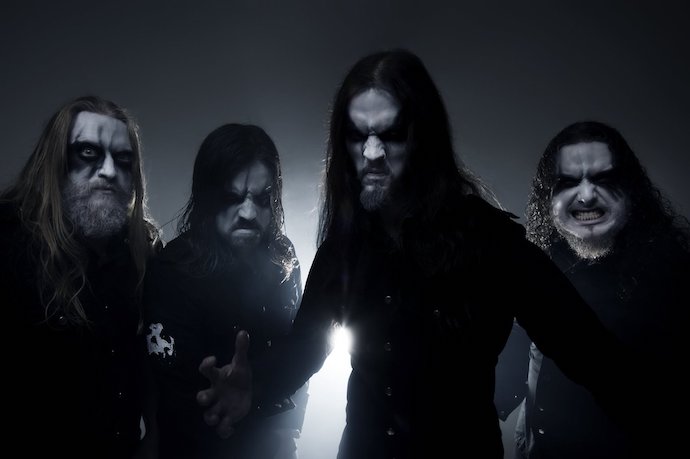 It’s not a coincidence that much of this review focuses on just how large the album feels, even though (as mentioned before) it is two minutes shorter than its predecessor. With this disc the group decided to make the ambitious songwriting that defined the back half of The Endurance At Night the standard by which their newest one was going to be defined. It isn’t so much that the group have surrendered the dynamic of creating songs that reach in many very different directions. It’s more like they concluded, “That group of songs on The Endurance At Night‘s back half worked for us, so let’s do that seven times”.

Thus, Apotheosis loses out a bit in terms of overall dynamics because every track aims to cover so much ground, and Necronautical’s bread-and-butter musically shifts from a solid thudding blast to a mid-tempo groove in just about every song. It’s why the brief moments of full-on black metal hellfire stick out so much, because Apotheosis is full of so many cocksure groove-rhythm segments which you can’t help but headbang along to, that the times where Necronautical remind you that the face paint and theatricality have their roots in black-metal’s shrieking forests really do shine.

Apotheosis is one of those albums where you have to gird yourself for the journey. No song is weak or drags, it’s just that the temptation to take a quick intermission and come back where you left off does hold a large appeal here. For your dearest reviewer, splitting off after the title song and coming back for the three-song run of “Totentanz” through “The Endless Spiral’ seemed to work the best after the realization of “oh wow, there is a lot to unpack here” started to settle in.

Apotheosis is a big, dense block of adventurous and cinematic black metal that fulfills a whole lot of Necronautical’s potential as promised over the years, and leaves them feeling like a far larger force than what the group’s four-musician roster might initially suggest.

One Response to “NECRONAUTICAL: “APOTHEOSIS””