As promised in Part 1 of this week’s somewhat delayed edition of this column, the music I’ve selected for Part 2 consists of recordings by bands who are new discoveries for me, for which I’ll credit two regular sources of new discoveries. But before we get to the music, I have an exciting announcement to share, which occurred just today.

I didn’t jump into Krater’s creations until their third album, 2016’s Urere, but that instantly made me a fan, so much so that I felt compelled to share today’s announcement of their new album even though I don’t yet have any song streams to present. The opportunity to put Misanthropic-Art‘s creepy creation for the album’s cover at the top of our page was an added inducement.

The new full-length, which I learned about from a Bandcamp alert, is named Venenare, and it will be released on November 15th by Eisenwald. Not yet able to form any impressions of the music, I’ll instead provide Eisenwald’s summary:

“A 50-minute work broken into nine songs but unified as one winding, widescreen composition, Venenare shows KRATER at the height of their all-too-considerable powers, a blinding and windswept vortex of sumptuous songcraft and passionate execution. Motifs slice and dice, blast and race with a grace that’s simply stunning, as melodic counterplay runs riot with a proud ‘n’ powerful assertion of classic metal sensibility. KRATER’s contours here undeniably exude a sleek and urban quality, but with abstracted hints of their pagan past subtly woven in to the soundfield, the result is staunchly second-wave black metal bravely recast for the 21st century. Venenare is thus timeless, yet forward-thinking all the same.”

Although I don’t have any of the new music to present, I decided to include a great video for a track from the band’s last album, which I included in our list of 2016’s Most Infectious Extreme Metal Songs, for those of you who might be discovering Krater for the first time. 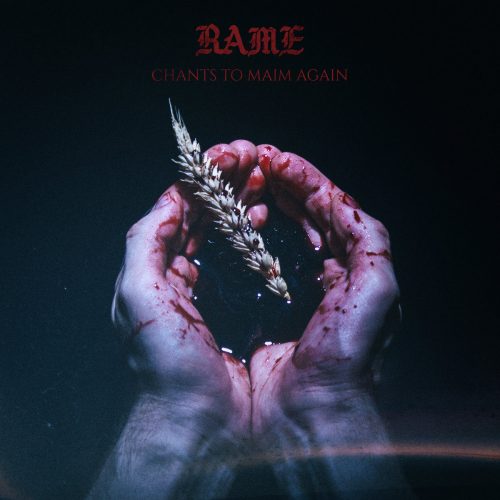 Now I’ll turn to new music, beginning with the debut album by the Russian duo Rame, which bears the wonderful title Chants To Maim Again. I learned about the album from Rennie (starkweather), who dropped a comparison to Mgła, which was all the inducement I needed to dive into the album.

Rame‘s music here, which entwines post-metal with black metal, is produced with pummeling propulsive power in the rhythms and searing yet dynamic intensity in the riffing and the keyboard layers. The emotionally powerful melodies swirl and burn, slash and jolt, seethe and soar. At the zeniths of intensity, when the sound becomes almost overpowering, the feeling is usually one of desperate yearning, screaming pain, brazen defiance, or tragic grandeur rather than joy.

The songs are undeniably fierce, and the scorching vocals bespeak a soul that has been pushed by pain and rage over the edge into insanity, yet the unchained fury in the music is constantly accompanied by penetrating melodies that create immersive emotional vortices, and often by electrifying riffs that will give your neck a good workout (“The Ritual of Soul Burning” is a fantastic example of that, but not the only one).

There are times when the surging momentum and wrenching emotional impact of the music relents. The intro of the glorious “Beings of Aether” is such a moment, and the song as a whole provides glimpses of hopefulness and majesty, as well as a variation in both the musical and the vocal style. The dreamlike symphonic intro to “Nausea of Love” is another such instance, as is the pulsing gloom at the outset of “Other Side”. The monumental closing track “Nav’ the Everlasting”, spans a wide range of dynamic tempos, moods, and musical styles, harnessing all of the album’s best qualities into a single composition.

But the divergences from the album’s main-line of ravaging extremity are few in number. Sticking to the album all the way through its significant length is like being lashed to a mast in a ship buffeted by a black storm, the skies split by lightning and the air by siren song. But as you might imagine from such an experience, the album is a tremendous non-stop thrill — a force of nature itself — rather than an arduous and exhausting journey. Highly recommended.

Chants To Maim Again was released on September 11th, and you can pick it up on Bandcamp.

Tästä Kuolevasta Maailmasta, digitally pre-released on August 27th, is the debut album of the Finnish band Tyhjä, who hail from Lappeenranta in the southeast, on the shore of lake Saimaa.

If you imagine the shocking, visceral impact of being pierced by a giant spear appearing out of nowhere and nailing you to the nearest wall, that’s akin to how I felt in listening to the album’s opening track, “Raivo”. I don’t mean to suggest it’s a painful or life-threatening experience, but it’s definitely an explosive surprise. The combination of hyper-blasting snare and roiling, raking, blaring riffage, which is just as bleeding-edge fast and maniacal, creates a breathtaking experience. The vocals, which are nearly submerged within the tremendous onslaught of extravagant sound, seem just as crazed. But here’s the thing: There’s a sensation of soaring magnificence in the music as well as chaos.

If you’re like me, you’ll stay completely dialed-in for the rest of the album, and what you’ll find is a lot more of the same — a lot more of the riveting and ravaging assault on the senses that makes “Raivo” such a jaw-dropper. The album truly is a deranged black maelstrom — the deep bubbling bass is about the only ingredient in the music that doesn’t usually sound like a paroxysm of madness. But as in the case of “Raivo”, the band revel in their excesses, utterly given over to a kind of exultation that frequently becomes glorious and almost panoramic in its atmosphere.

After the first two-and-a-half tracks, I wondered if I’d stroke out before getting to the end. But about mid-way into “Äänetön Kevät”, the band provide a change of course, which is surprising and, for the weak-kneed among us, welcome. There are a few more surprises lying in wait (including the utterly nightmarish fourth and seventh tracks of apocalyptic black noise, with ghostly chanted vocals in the first of those and monstrous demonic utterances in the second), which demonstrate that Tyhjä‘s aesthetics are more varied than might first be apparent.

But even with those variations in the mix, you’d still better take lots of deep breaths before you begin this album stream.

Both Miloš and Rennie recommended this album to me, and I’m very glad they did. The album will get a physical release later this year via Void Wanderer Productions and War Productions. 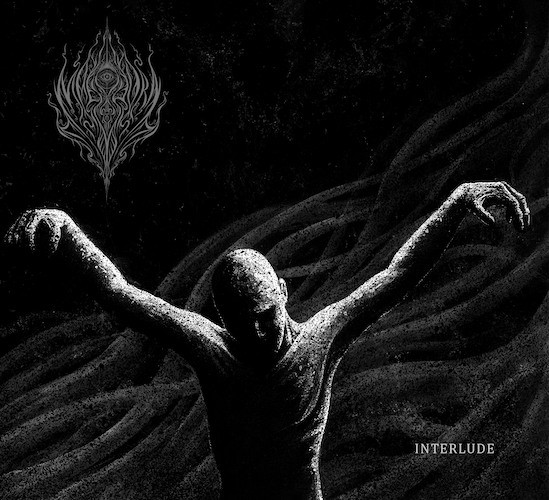 To close, I’m turning to “Of Forests and Troubled Pasts“, the first song released from Interlude, the debut album by Maeskyyrn from Montreal, Québec. The band’s ethos is not uplifting. In their words, the music revolves around “emptiness, our choices among alternative paths, the soul that goes astray, perdition and all the sadness of our lives”. They “have assembled melodies into songs instead of turning our contempt into regrets, fear and deceit.” But believe me, there’s a lot more to the music that you might suspect from that introduction.

The song below is a long one, and a completely captivating one. The grief that dwells within it becomes immediately apparent in the solitary opening notes, and becomes an even more gripping presence through the mesmerizing trill of the main guitar lead. But while the music’s depressive atmosphere is unmistakable, it’s also a tremendously thrilling song. The compulsive drive of the rhythm section and the sheer shattering pain in the vocals assure that, but the shivering vibrations of the leads also send powerful electric currents through the body, even as they’re channeling strident grasping and severe heartbreak.

The song also includes a gripping digression, when the music becomes slow and beautiful in its melancholy, and clean vocals provide a different expression of grief. After that, when the energy mounts again, the extended guitar solo is simply wondrous, and in its scintillating sounds (backed by deep, reverent choral voices) perhaps it hints at hope and flares into joy. There’s also a sense of mystic wonder and tremendous earthy vitality that comes through in the closing minutes. I felt like giving a standing ovation by the end.

Interlude will be released by Hypnotic Dirge Records both digitally and in a 6-panel digipack edition with an accompanying booklet on October 17th.