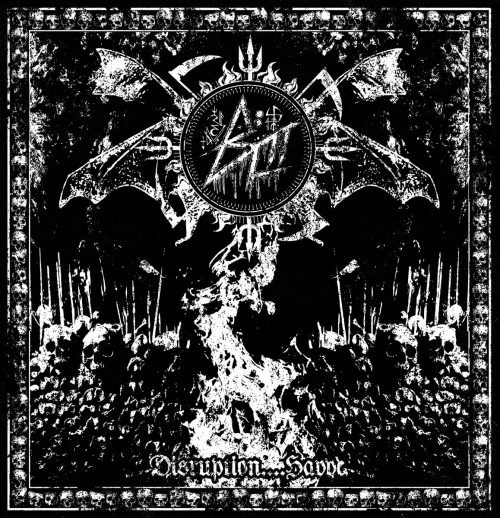 The California-based black metal band Blasphemous Covenant is a rabid and riotous assault force created by members of Byyrth and Thy Sepulchral Moon. They describe their debut album, the accurately titled Disruption… Havoc, as “blind chaotic hatred sealed against its will inside a cage, frothing at the mouth, ready to destroy those that dare to open the gate.” Also absolutely accurate. The music violently assaults the senses with pure fury and sears the brain with its abrasive intensity and mutated tonalities. It is raw black metal that will indeed leave you scraped raw and gibbering like a lunatic.

But as you’ll find when you listen to the partial track we’re premiering today in advance of the album’s September 20 release by Grey Matter Productions, there are qualities in the music that you might not be expecting from that preceding description, and a method of execution that isn’t typical either. 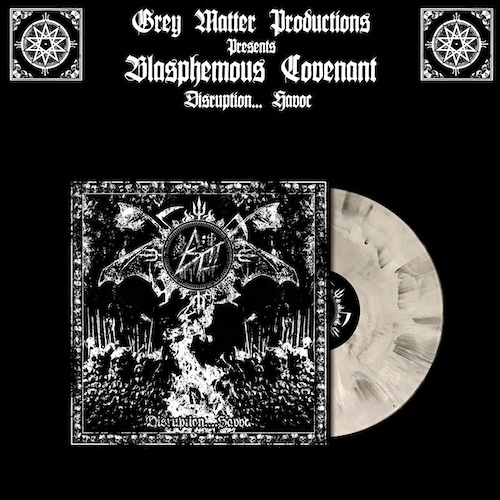 As for the manner of execution, the music features dual shrieking demonic voices and dual bass punishment, together with a maniacal drum attack — but no guitar. The sound is drenched in familiar lo-fi distortion, but certain sounds still spear the mind from within these hurricane-like vortices of sound.

As for the experience of this particular song,  it is not only undeniably violent and chaotically unhinged, it also has a contagious pulse and a feeling of bacchanalian ebullience. It would be too much to call it joyful, yet in its anarchic excesses it does sound like the throes of savage ecstasy.

What we’re presenting is the first part of a track called “Hurricane Of Noosefiending / Spell-Possessed The Howling Winds Of Decades“, which is more than 22 minutes in length. Even “Hurricane of Noosefiending” crests over the 9-minute mark.

At first blush what you will hear is just pure sonic warfare — a cyclone of blasting and maniacally clattering drumwork, torrential bass riffing with a cavernous tone and a thrusting momentum, and scalding reverbed shrieks capable of rending your eardrums into bleeding tatters. Yet it doesn’t take long for a rapidly flickering tonal pulse to emerge, providing a darting rhythmic sensation to go along with those mighty bass thrusts.

The speed is relentless, and the mutated murkiness of the sound is near-suffocating, but through this maelstrom the sound of the snare blazes, and other shrill tones leap out like blinding lights — the astonishing screams of an even higher second voice, which sounds something like the piercing flat shine fo a China cymbal.

If you’re waiting for a break in the action over the course of this long first part of the track, don’t hold your breath. It cycles relentlessly all the way through, and in doing so becomes perversely mesmerizing.

Fittingly, the video accompanying the music is a flashing montage of film clips, all of them portraying real-world violence.

Disruption… Havoc is available for pre-order now, both digitally and on vinyl.

In one of the players below you can also check out another track from the album, “Wrath Blotted Horizon / Miscreant Expiation”.