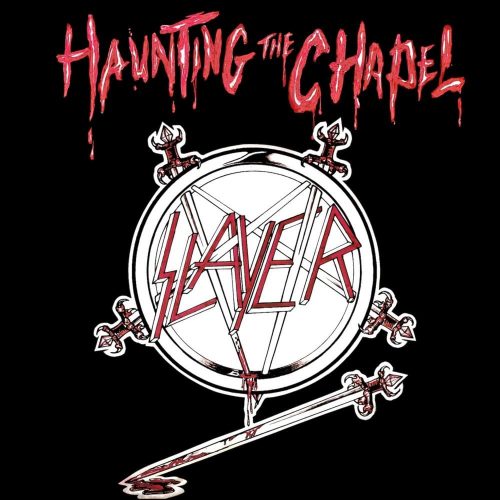 (This is the third installment in an extensive series of posts by TheMadIsraeli devoted to a retrospective analysis of the discography of Slayer. Our plan is to continue posting the remaining installments on a daily basis until it’s completed.)

I really want to know what inspired Slayer going into the writing of Haunting The Chapel.  It’s such an overnight transformation that the question of what caused it to occur boggles the mind. This EP is one of the best ever created in the history of metal.  It’s a top 10er at minimum.  It’s concise, vicious, and unrelenting, and the song-writing and riff-craft speak to a release that had obsessive amounts of loving attention and detail put into it. Everything about this EP is in that sweet spot between speed, technicality, drama, and unrelenting brutality. 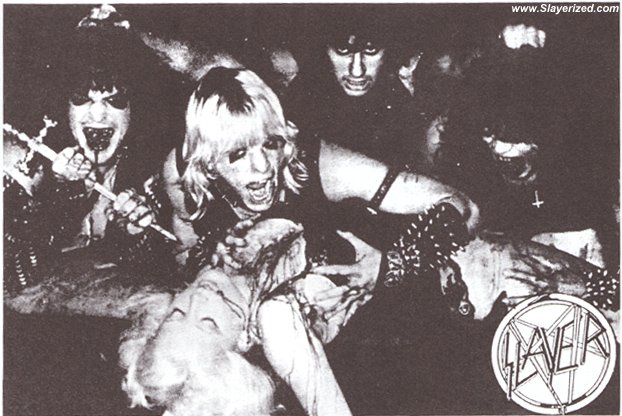 Lots of things changed on this 1984 release compared to the debut album that preceded it the year before.  The downtuning of the guitars to D# standard instead of E gave the riffs an overall darker and chunkier tone.  The second thing is the almost complete exorcism of their British heavy metal aspects. Slayer started writing their own kinds of riffs, more rooted in their punk interests, but melodically speaking, what exists on Haunting The Chapel is twisted, manic, chaotic, and devoid of compassion.

There are anchors to the riffs, melodic refrains that serve as hooks, but they’re surrounded by a complete disregard for conventional minor scale melodic structure at this point. Slayer put the notes where they fucking want to, when they fucking want to, and you have to accept that or get the fuck out.

“Chemical Warfare” is one of the best opening songs on an extreme metal release ever.  It’s also a top 10er.  It’s the ideal opening extreme metal song personified. Unlike Metallica, who on “Battery” used acoustic guitars and guitar harmonies to facilitate the drama of its opening, Slayer only did what was possible to emulate in human capacity live at a show.

The swell of building power and intensity in the opening of “Chemical Warfare” is simple in concept but so powerful. The opening of the solo palm-muted guitar rhythm and the way the rest of the band slowly bleed into it when it explodes into the main riff is a powerful hook.  It’s metal song-writing at it’s finest.  This music SOUNDS like warfare, with bleak melodies that are twisted but make definitive sense, Tom Araya yelling his heart out, Lombardo unrelentingly beating your fucking skull in — the chaos of it all is exhilarating.

On this release Slayer also demonstrated their absolute mastery of the tempo change and how to make it hit you hard and fast.  The transition at 1:57 into one of the most barbaric riffs written in metal’s history, with Lombardo’s almost tribal warfare-esque backing, really builds up the energy going into the call-back to the intro, and the solo section sounds like blazing hellfire raining down from the sky (it is chemical warfare, after all). The ensuing riff and transition back into the song’s chorus riff are great, and eventually lead to an EXCELLENT closing section that ramps up in intensity until the song just dies in a torrent of bullets, blood, and napalm.  This is a fucking metal song.

“Captor Of Sin” is sinister swing with the feel of a march to your own death. The increasing technicality of Slayer’s riffing is exemplified here, especially during the verse riff and the ending refrain that epitomizes the transition into the chorus riff.  The pre-solo buildup is also a great display of King and Hanneman’s guitar pyrotechnics in a riffing context.

The EP’s closing song, the title track, is nothing but pure riffs and an innovator in intensity.  This technique of a really solid thrash riff with nothing but consistent machine gun double bass-was probably a revelation at the time, with it being executed at this speed.  It turns what would usually be a mid-paced song into a hellstorm of pure aggression and it triples the heft and pull of the section.  What this song also demonstrates, once again, is Slayer’s mastery of the tempo change.  The alien angular riffcraft blitz in the middle of this song combined with the explosion of speed is straight sonic adrenaline.

As anyone reading this can tell, I think QUITE highly of this release.  It’s one of my favorites in Slayer’s discography and something I can listen to at any time and love.  But it would be outdone in dominating fashion by the release that followed it.