P.P.S. Yes, I do know about the surprise release of Blut Aus Nord‘s new album. I had been waiting to post my review until everyone else got the promo. Now everyone can hear it, but I’ll share my own thoughts anyway — probably tomorrow. 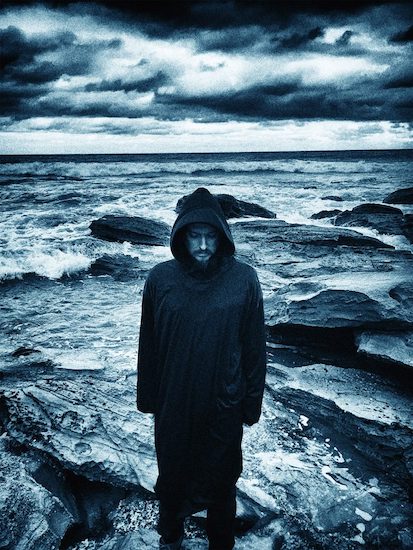 Dis Pater returns. Four years after Shards Of Silver Fade, this Australian musician resumes his Midnight Odyssey with a new album, which is the first installment in a new three-part chapter for his creations. The title, Biolume Part 1 – In Tartarean Chains, refers to an interesting conceptual metaphor. As Dis Pater explains:

“When coming up with the ideas for Biolume, I was thinking of how the relationship of light and darkness are tied together. In the darkest caves, the deepest parts of the ocean, there are lights which are produced by organisms, with no need for the sun. Darkness is seen as a place of banishment, you are expelled from the light. To survive you have to create your own light, which no matter how faint, enables you to see enough of what you need.”

It’s a big album — almost 72 minutes long, and the track below is a big one, too, and a wide-ranging one. “Hidden In Tartarus” creates that juxtaposition of light and darkness through mystical and mesmerizing symphonic swells and oscillations of searing sound, coupled with enormous, stately marches and ominous surges of typhoon-like yet magisterial power. Similarly, Dis Pater switches between soaring choral vocals and ravaging, bestial snarls. Weird, wondrous, and wild, the song is a spell-binder but also one that can put your heart in your throat. It’s fully capable of pinning listeners in place from beginning to end.

I, Voidhanger Records will release this album on November 1st. The wonderful cover art, which is at the top of this post, was made by Elijah Tamu (Ikonostasis).

Ken Sorceron returns, too, with the fifth Abigail Williams album, Walk Beyond the Dark. It should be obvious to anyone who has been following the band since its inception that it will not be quite like any of the records which preceded it, because change has been the constant for AW.

The PR material for the album refers to the music as a summing up of the band’s previous “experiments”, a melding of elements from all of the first four albums. I will be interested to read Andy Synn‘s take on it, which will be forthcoming. For now, I’ll just comment on the first advance track, “I Will Depart“, which I think is tremendously good.

The swirling and darting leads gleam like black magic incantations, creating an atmosphere that’s both seductive and threatening, eerily exotic and malignantly majestic. And while the song does have a definite atmospheric quality, there’s also physical thrust and jolting force in the music, as well as eruptions of battering and incendiary chaos. Sorceron‘s vocal’s are downright vicious, to the point of sounding completely unhinged (though extravagant, haunting wails are in the mix too).

There are so many moving parts in the song, but it all coalesces beautifully, and exerts such powerful magnetic attraction that it becomes very easy to come back to it, ready again to be mesmerized and beaten.

Walk Beyond the Dark will be released by Blood Music on November 15th, with a vinyl release projected for December 13th. If you couldn’t guess, the cover art is a painting by Mariusz Lewandowski. 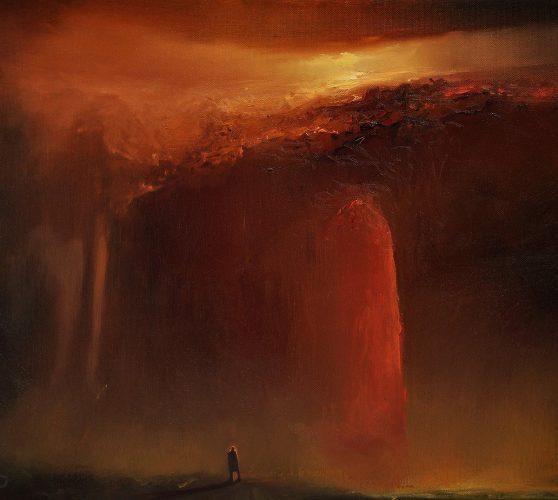 Here’s the third album in a row today which features stunning cover art, this time by Dawid Figielek. Aevum is the third album by the Chicago-based quartet Vukari, whom I’ve been following and writing about since coming across their En To Pan EP  in July 2014. The first “single” from the album, which premiered in the first week of this month at Invisible Oranges, makes me even more eager to dig into the rest of the record.

There is indeed a hallucinatory quality to the shining guitar notes and the backing shimmer of ambient sound at the outset of “Abrasive Hallucinations (Reality Hemorrhaging)”, a sensation that grows increasingly tense and foreboding, driven to heights of anguish and fear by long wailing chords and pulverizing drum and bass detonations. When the tension breaks, it’s in a shocking explosion of hyper-fast drum blasting and a surround-sound storm of terrifying melodic grandeur, accompanied by horrifying vocal extremity.

The intensity of that experience is near-overwhelming, and even when the rhythm section switches into an avalanche-like tumbling and the vocals briefly turn to roars, the music still sends chills up and down the spine. When it surges to one last plateau of ravaging intensity, melding majesty and fear, tyrannical power and inconsolable pain, the effect is breathtaking.

Aevum will be released on October 1st by Vendetta Records. 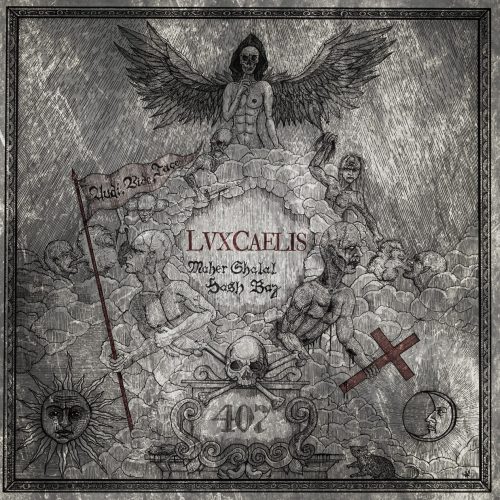 Like Vukari, the Chilean band LvxCaelis is one I’ve been following and writing about since 2014. And coincidentally, like Vukari, LvxCaelis will be releasing their third album this fall. Its name is Maher Shalal Hash Baz.

The song below, “The Beginning Was the End“, had its premiere at CVLT Nation. The music is multi-dimensional but persistently paranormal in its atmosphere, and relentlessly frightening. While the drumming is usually rampant and the vocals are both cruel and crazed, the vicious vibrating riffs and blaring chords create changing sensations of crushing bleakness, ruthless malignancy, and savage madness. Poison flows through the veins of the music; crazed apparitions seem to rise up in gigantic manifestations of occult power; demonic hordes are unleashed in displays of stunning barbarism; and we are bound in chains and slowly marched into the abyss.

Maher Shalal Hash Baz will be released on October 31st via Lamech Records. The cover art was created by Åskväder.

(Thanks to Rennie of starkweather for making me aware this song was out in the world before the PR announcement arrived.) 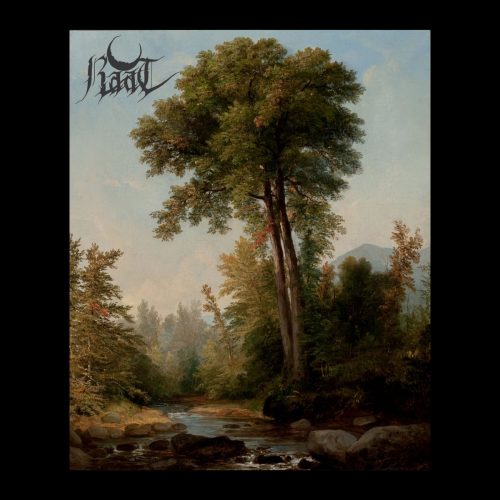 Well, this makes four bands in a row whose music I’ve been following closely and writing about frequently. This time it’s Raat from Delhi, India. Raat has a new album due for arrival on October 25th, the name of which is Déraciné.

The title track has emerged first, and it creates a sharp contrast with that immediately preceding track by LvxCaelis, but it’s no less riveting. Driven by a strong physical pulse (which is always a hallmark of this creator’s music), with an especially vibrant bass presence, and not hemmed in by black metal conventions, the music finds intersections between splendor and introspection, between glinting brightness and desolating melancholy.

The vocals are nearly always abrasive and nerve-racking, but when the rhythm section falls silent, the sorrowful guitar-and-bass duet is simply beautiful. An air of tragedy shrouds the music when all the instruments combine again and the vocals turn to a soulful lament, but one might detect hints of hopefulness, or perhaps only a fond yet sad recollection of better times long lost.

The cover artwork for this album is an 1853 painting by Asher Brown Durand, “A Natural Monarch”.

UPDATE: Raat has now released a video for the song “Déraciné”, which I’ve added below, along with the Bandcamp stream. 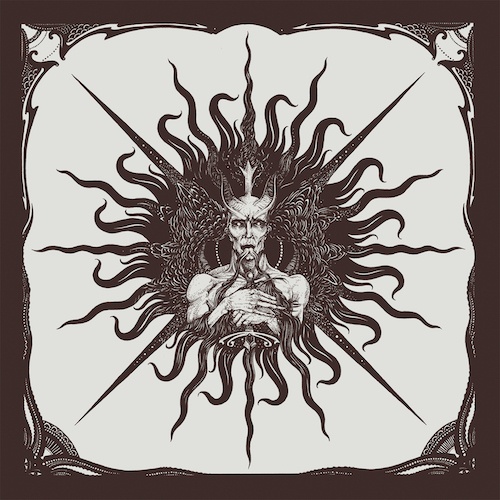 To close Part 1 of this week’s SHADES OF BLACK I’ve chosen a split released by W.T.C. Productions on September 11th. The two participants, both from Sweden, are Flagellant, whose last release was another split (named Ekstrophë) that we premiered and reviewed in 2018, and Orcivus. Orcivus are a new discovery for me. Metal-Archives lists a discography that includes two albums (the last of which was way back in 2010) and a previous split in 2016.

Both bands contributed four new tracks to this new split. Flagellant‘s tracks display ice-cold black metal cruelty as well as the burning flame of hatred and fierce defiance. The music is undeniably bleak but just as undeniably grand in its summoning of skin-shivering fear and oppressive, otherworldly might. There are giant, booming grooves in the songs, and swarms and shards of unnerving dissonance in the riffing and the leads, while the vocals are unrelentingly terroristic. But, as amply demonstrated, especially but not exclusively through the second track (“Globus Cruciger”), Flagellant are equally adept at delivering their musical demonism through rocking cadences and riffing that channels the heat of carnal lust.

The music of Orcivus complements that of Flagellant, though it leans a bit more into the electrifying effect of wildfire conflagrations and riotous chaos. With vocals just as wild and barbaric as those of Flagellant, Orcivus also displays a bent for dissonant melody, but often wrap them in extravagant storms of deranged, cyclonic ferocity that are geared toward getting your adrenaline flowing. There’s a powerful, sludgy low end at work in the music, and welcome dynamism in the drum rhythms, and Orcivus use the slower segments to create sensations that are hallucinatory, steeped in misery, or (to re-use a word I’ve been using repeatedly in this post) magnificent. As icing on the cake, the band surface some seriously head-hooking riffs in these ever-changing compositions.

Much more could be written about this split, and comparisons made to the music of other groups as reference points, but I’m at the end of NCS time for today, so I’ll just sum up by saying this is one of the best black metal splits I’ve heard this year, and as an album-length release, one of the better black metal albums I’ve heard, too.

The artwork for the split was crafted by Karmazid.

(Thanks to JC for recommending this split.)