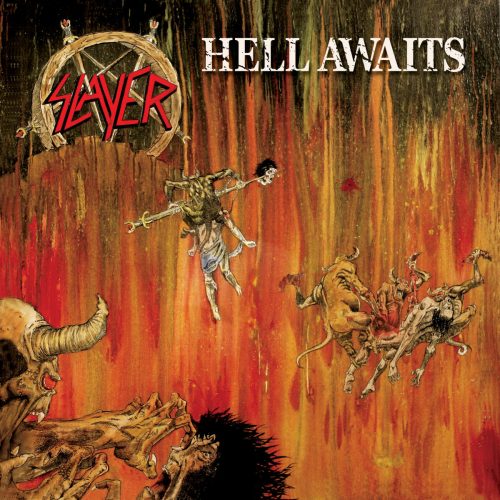 (This is the fourth installment in an extensive series of posts by TheMadIsraeli devoted to a retrospective analysis of the discography of Slayer. Links to the preceding installments are at the end of this post. Our plan is to continue posting the remaining Parts on a daily basis until the series is completed.)

So, I somehow both never sent the original Hell Awaits part of this series to Islander AND then lost it, so I had to rewrite it.  Sorry for the slip-up.  Had to correct this obviously because it’s Slayer’s best old school release.

Hell Awaits in many ways can be viewed as a Haunting The Chapel Pt 2 sort of release.  The style of song-writing and the mood is the same, but what’s changed is that the ambition of both the song-writing and the technical execution has been leveled up quite a bit.  The result is, to me, still Slayer’s most dark and foreboding album (if you can call it that? I’ve always thought of this as another EP) and is one of my all-time favorites from the band’s body of work. 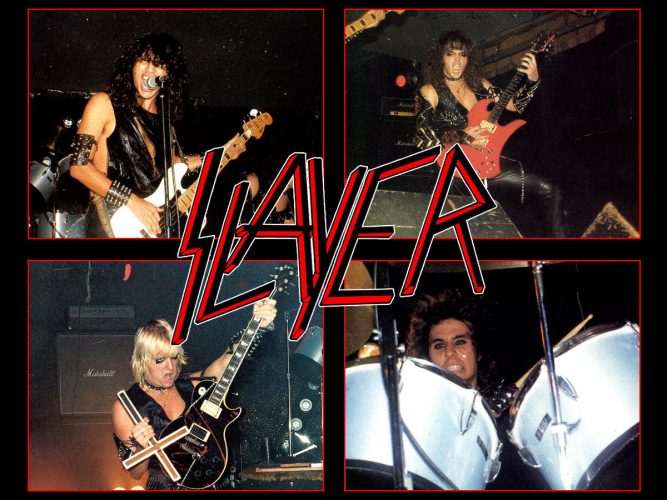 The thing is, maybe I should’ve just reviewed this and Haunting The Chapel together because beyond my initial description there isn’t much more to say, but I’ve got a few things.  “Hell Awaits” (the song itself) is one of the best opening tracks of all time. The drama of its entire intro is the kind of stuff I LOVED from Slayer’s early work. The buildup to the way the song just explodes into the frantic endurance fest of the track as a whole is quality metal song-writing.

“Frantic” is definitely the word to describe Hell Awaits in general.  Every song on this album has a sense of desperate life-or-death urgency to it, and the riffs are consistently driving in a way that feels like Slayer really wanted to push their endurance muscles in a Dark Angel kind of way.

I suspect that “At Dawn They Sleep” had to have been massively influential on the more groovy side of death metal.  You can hear a lot of what influenced bands like Cannibal Corpse in this song for fucking sure if you’re tuned into metal that deep.  The dissonance, the sinister guitar harmonies, the chromatic riffing patterns to throw off conventionally melodic parts and give them that twisted edge — this is one of Slayer’s best-written songs.

I also love the straight-forward belligerence of “Praise Of Death” and “Necrophiliac” — they’re pure riffs, adrenaline, blood, and carnage, combining to provide a better example of it than almost anything found on Reign In Blood.  The only criticism I’ve ever had of this near-perfect release is that it drops the ball in the way it closes.  “Hardening Of The Arteries” is a Reign In Blood-style song done right, but it lacks impact after the epic “Crypts Of Eternity”, easily the best song on the album.  I wish “Crypts…” had been the closer.  I suppose this would’ve been awkward, though, since “Hardening Of The Arteries” ends by re-using the title track’s intro as a nice full-circle gesture.

Hell Awaits was a huge step up from Haunting The Chapel and was a sign of a band who were already actively revisiting the drawing board of their sound. It SOUNDS like a band at the peak of their drive, and is definitely one of my all-time personal favorites.  They’d go on to release Reign In Blood next, which you might know from reading that part of the series I felt was a step down from this release.  However, Slayer would step it back up again with the triumphant South Of Heaven.

For other installments in this series, check these links: