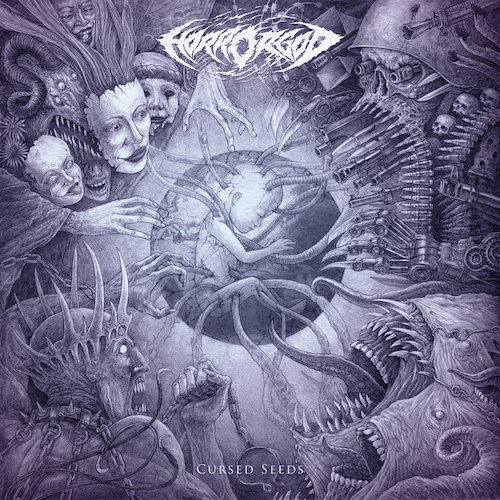 After a seven-year hiatus (interrupted only by their 2017 split with Techne), the Russian dissonant black/death metal band Horror God are returning this year with their third album, and their most electrifying, unpredictable, and thoroughly explosive creation yet. Bearing the title Cursed Seeds, it will be released on September 27th by Lavadome Productions, but today we present a full stream of the record — and the following thoughts about the impact of listening to it.

The releasing label makes comparative references to Gorguts and Deathspell Omega, to Ulcerate and Aosoth, to Immolation and Sunless, among others. As those references suggest, the music is multi-faceted — delirious and devastating, technically extravagant and ruthlessly bludgeoning, hallucinatory and harrowing. In its rapidly changing and often riotous permutations, it has an experimental, avant-garde quality, yet is unmistakably bestial in its ferocity. Keeping your balance as you listen is difficult; tearing yourself away from it would be even more difficult.

Cursed Seeds is likely to appeal to a wide range of listeners. For example, the jaw-dropping speed and equally frenzied changes in the fretwork will bring a greedy smile to the faces of tech-death addicts. The multiply layered torrent of flickering, darting, angular notes and turbocharged hammering chords come at you so fast and so furiously that it sends the mind spinning in a centrifuge, while the accents of melodic dissonance give the music an un-real aura (as if the mercurial string-work weren’t un-real enough).

Not to be outdone, the drumming is a veritable blizzard of fast-twitching athleticism and brutalizing savagery, while the bass performance is an amazingly vibrant and nimble show all by itself (though it also beats the listener like the vigorous application of a crowbar to the neck).

But the album is not solely a riot of mind-bending technicality and demented adventurousness. Horror God pick their moments to ease back on the throttle, and to then pluck the strands of unearthly menace within their music and bring them to the fore, devoting themselves to moments of atmosphere that send chills down the spine, or simply to methodically clobber the listener senseless with big sludgy bass tones and gut-punching drum blows.

In addition, the songs are sometimes laced with soloing that’s as fluid and eerily seductive as the usual run of the fretwork is jolting and destabilizing, though the soloing also soars to heights of scintillating extravagance. Some of the credit for the soloing goes to Gorguts and Dysrhythmia guitarist Kevin Hufnagel, who makes an attention-grabbing guest appearance on “They Were Behind the Barbed Wire”.

While the music is ferocious even in its most speedy and kaleidoscopic displays of instrumental extravagance, in the sense that the power and intensity are in the red zone, a big element of that ferocity consists of the unrestrained barbarism of the roaring and braying vocals. They go bowels-deep, and hit highs that sound like the consequences of disembowelment.

Produced with power and the kind of clarity you want for music that includes so many elaborate and meticulously executed moving parts, Cursed Seeds makes a striking impact, capable of leaving you bruised and broken, with neurons scrambled and fears of the unknown given new life — and feeling like you could race with cheetahs if only given the chance (it’s that exciting).

To repeat, Cursed Seeds will be out via Lavadome on September 27th. Order it now if you know what’s good for you: