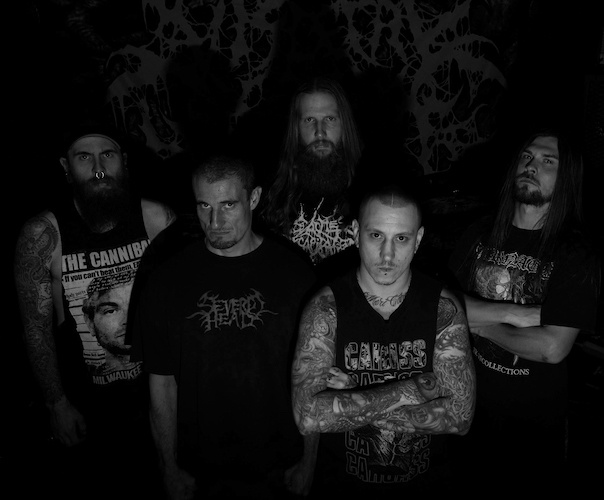 (This is Vonlughlio’s review of the long-awaited second album by the Baltimore brutal death metal band Visceral Disgorge.)

This time around the subject is Slithering Evisceration, the long-awaited sophomore album by Visceral Disgorge (Baltimore, Maryland), released via Agonia Records on September 13th. This project was formed back in 2007. They released their debut album Ingesting Putridity in 2011 and that was well-received, gaining the band a lot of fans worldwide.  One of my favorite aspects from that record was the riffs of Steve Rosenzweig (R.I.P.), such an amazing musician who left us too early.

Thanks to the overall reaction to the first album and the massive following it produced, the band was able to tour quite a bit, and I was fortunate to see them at Chicago Domination Fest III in 2016. To say the least, their performance was among my favorites from that fest. They leveled the placed. That was not an easy task — Gorgasm, Lividity, Inherit Disease, and Malignancy played as well, and their performances were also among the best. So, I was quite impressed with the stage show of Visceral Disgorge. 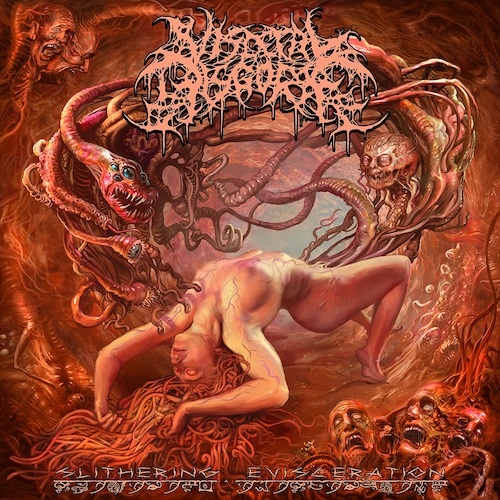 Although there was a lot of touring, there was no new album in sight and that got me somewhat frustrated simply because I wanted to see what they would do after their strong debut. Although that was a very good first full-length, some aspects of the production bugged me. There was also the matter of musicians releasing only one album that by itself had become the driving force of judgment from us fans (somewhat unfairly at times) over so many years.

So, after roughly eight years, they announced the follow-up, Slithering Evisceration. That was exciting news, but of course I was somewhat hesitant, wondering how it would sound and what direction the band had decided to take. The rest of the music world had not stood still since their debut, and the new one would be appearing in a different context. After they released the first single, I did enjoy it quite a bit, though the sound of the snare kind of bothered me, but hey, nothing is perfect.

After having listened to the new album multiple times, I can say this release is solid, and I’ve even come to like it more than their debut.  It’s filled with great riffs and interesting structures that keep the album engaging the whole time. As mentioned, nothing is perfect and this effort is not exempt from that truth.  The snare took me a bit to get used to, and I wish the vocals were a little higher in the mixed. Having seen this band live, it does not do justice to the voracious vocals of their front man.

Some might love or hate this release, but these musicians are very talented, and that’s a fact. All the performers are in sync and it shows in the music, with each member playing a pivotal role that has helped make Slithering Evisceration an album that for me has gotten lots of spins and will remain in constant rotation.

I am looking forward to seeing them live again this October 5th in South Carolina during the Bloodletting North America tour with Abhorrent Deformity (as local support) and Disentomb, among others.  All are great bands that crush live and have released amazing music that everyone should listen to.

Check out the release at the label’s Bandcamp page. Remaining tour dates are here: