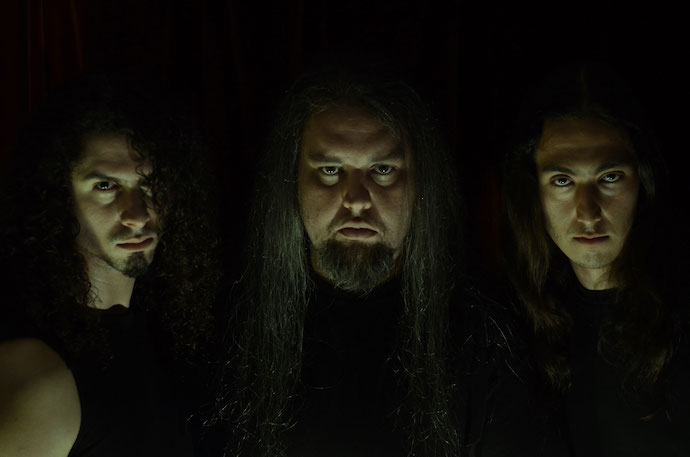 Looks can be deceiving. At least as captured in this photo, the three members of Chaos Motion appear calm and serious, albeit a bit menacingly serious, as if planning something potentially dangerous to your health. On the other hand, their music is absolutely mad — fiendishly inventive, thrillingly adventurous, relentlessly unpredictable, and fully capable of flipping your brain upside-down and inside-out.

Not for naught is the band named Chaos Motion, nor is it happenstance that their debut album is entitled Psychological Spasms Cacophony. Likewise, “Psychotic Spasm“, the title of the song we’re premiering today, are not empty words. Their label’s references to the likes of Gorguts, Portal, Origin, Wormed, and early Cephalic Carnage are not misdirections.

But maybe you’ve already figured all this out, since our premiere is the sixth in line leading up to the album’s October 18 release date. But if you haven’t already taken a ride on the Chaos Motion pan-dimensional roller-coaster, or even if you have, you’re in for an electrifying experience. 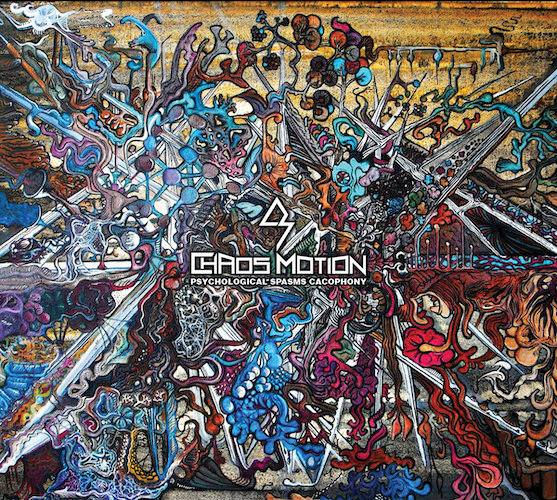 The wild album art, ingeniously rendered by T Bare McClough, is more suggestive of the music than that grim, poised promo shot of the band. “Psychotic Spasm” is a cavalcade of bewildering sonic sensations — discordance and delirium, frenzy and frightful hallucination, berserker marauding and the quiet muttering of an asylum inmate huddled in the corner. The riffing is at times an enveloping haze of eerie, destabilizing sound, matched with a contrasting percussive mayhem, but through all of the track’s intricate twists and turns (and there are a ton of them), there’s almost always something going on that sounds like mayhem.

The music starts and stops repeatedly (and rapidly). It’s splintered by big booming detonations and blaring chords, veined with freakishly swiveling guitar arpeggios and burbling bass notes, fractured by bursts of rapid-fire drum munitions and deviantly darting riffage. Guitarist Guillermo Gonzalez‘s gritty braying roars add an extra element of ferocity to this fierce escapade, and both he and co-guitarist Alexis Tedde have the technical chops to pull off this kind of compositional extravagance where most other instrumentalists would be left just shaking their heads in defeat, and drummer Juan Pablo Munoz matches them in his skill and inventiveness.

Calling this music “technical death metal” doesn’t seem to do it justice. Maybe it just has to be heard to believed, even if you’ll have to hear it more than once or twice to begin getting a grasp on it. So, do that below, and don’t stop with “Psychotic Spasm”. After you’ve recovered from your own psychotic spasm, move on to those five other tracks that preceded today’s debut.

Credit goes to Colin Marston for mastering the album, and Turkka Rantanen (Demilich) was responsible for the layout. The album will be released by Transcending Obscurity Records in a variety of formats, which you can explore via the links below.