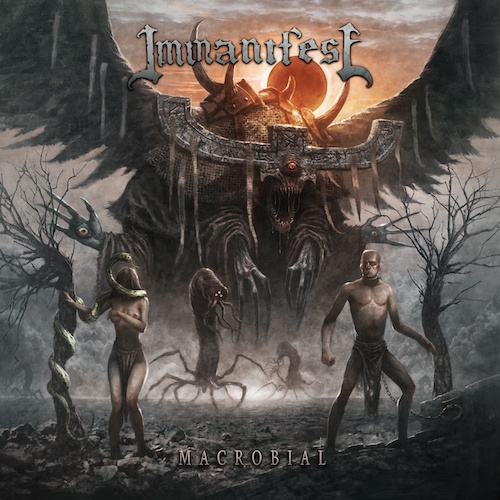 It has been a very long time coming, but Tampa’s Immanifest are finally following up their eye-opening 2010 debut EP Qliphotic with an album named Macrobial, and what a hell of an album it is! Animated by dark, occult themes, it is a sonically dense, bewilderingly intricate, viciously punishing, and thoroughly otherworldly combination of symphonic black and death metal, integrated with the speed and kaleidoscopic instrumental fireworks of technical death metal. The music is both machine-like and insectile, ethereal and bludgeoning, alien and monstrous, eerily majestic and savagely mauling.

And that’s not an exhaustive list of the styles and sensations so extravagantly delivered through this electrifying and explosive record. You’ll get a better sense of the band’s off-the-hook creative exuberance (and ferocious spirit) through the song we’re premiering today, in the run-up to the album’s November 8th release by The Artisan Era. The name of this new song is “Wandjina“. 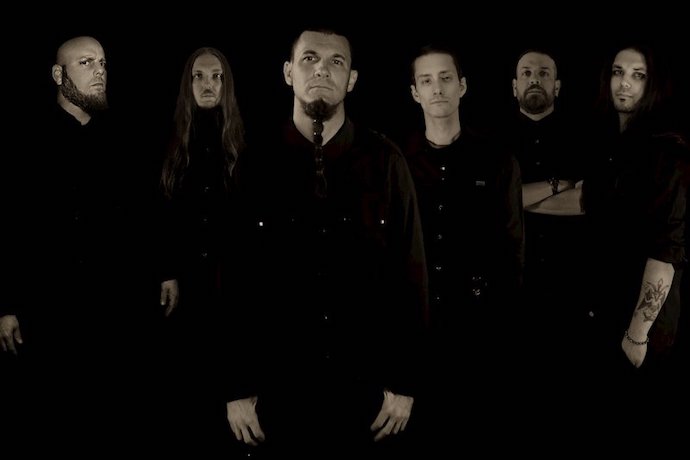 This dazzling new song appears third in Macrobial’s running order. Before you come to it, the comparatively brief “Energy Weapons Formed Against Us” provides a momentous introduction to the record, mixing waves of grand synths, darting keys, bursts of blizzard-fast percussive riffing, and rhythms that are both neck-snapping and militaristically violent. Accompanied by distorted spoken words, the atmosphere of the song is ominous and awe-inspiring.

What comes next is a track that has previously debuted, “Ultraterrestrial Creation“, and it’s as head-spinning and jaw-dropping as the new one we’re presenting today. That preceding song is a torrential assault of battering and jolting rhythms, mauling bass lines, and fleet-fingered fretwork that’s searing, swarming, and darting. Intricate and rapidly changing, the music also incorporates a mix of braying dissonance and mercurial arpeggios, flickering bits of electronica and rippling keys, and fast bursts of percussive mayhem. Horrid guttural roars and flesh-ripping shrieks underscore the maniacal barbarism of the song, but the track also includes a surprisingly bright and swirling guitar solo over acrobatic drum fills and a gliding melodic backdrop.

You may be breathing hard by the time that track ends, but “Wandjina” won’t give you a chance to catch your breath or unscramble your brain. Together with “Ultraterrestrial Creation”, it creates a powerhouse one-two punch in the album’s front half. Through cascades of scintillating guitar melody and eerie, ethereal synth grandeur, it introduces further dimensions of Immanifest‘s sonic pageantry — but it too is full of freakish fretwork eruptions and blazing drumwork. The vocals are just as incendiary in their passion and just as cut-throat in their ferocity, spitting the words with a speed that’s close to that of all the feverish fretwork flurries.

But again, the song’s speed-demon guitar mania, clobbering rhythms, and explosive instrumental outbursts are mixed with glorious synth-generated waves of unearthly spectacle, with those enveloping sounds rising toward summits of tension and fear before being interrupted by fast-jabbing notes, blaring chords, riotous drum acrobatics, and rapidly jackhammering riffage.

There’s a lot more to come on the album after the powerhouse opening described above, but let’s leave that for another day and instead share the band’s description of the album’s conceptual underpinnings:

“Macrobe was a term coined by Michael Tsarion – an Irish author, occult philosopher and lecturer – when describing the nature of entities contacted through supernatural rituals conducted by Dr. John Dee (mathematician, occult philosopher & advisor to Queen Elizabeth I) in the mid 16th century. Lyrically, the album explores this theme in a variety of ways including those of consciousness, death, astral travel, advanced and sequestered technology, and its weaponization through global war as a sacrificial blood ritual. Above all – the album describes a world submerged in a multi-dimensional wilderness, although deaf and blind to the influence of lifeforms that roam, explore, feed, and seek to experience what lay beyond their own dimensional horizons.”

Fantasy artist Helge C. Balzer (who has worked with Inferi and Universal Studios, among others) created the record’s eye-catching cover. The album was recorded and mixed at Sound Source Studios in Seminole, Florida by Immanifest members Asgrim and Anton Kalaj, and the mastering was handled by Anagnorisis guitarist Zak Denham. The Artisan Era‘s founder Malcolm Pugh (of Inferi) contributed guitar solos on two of the album’s songs.

Pre-order options are available through the links below, and then you’ll find streams of both “Wandjina” and the preceding track “Ultraterrestrial Creation“.

One Response to “AN NCS PREMIERE: IMMANIFEST — “WANDJINA””