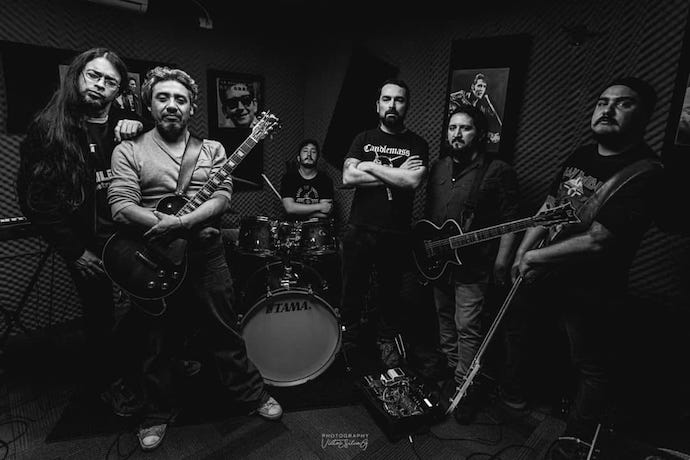 This decent material demonstrates rich instrumentals alongside expressive vocals lines performed in a vein of modern doom-death, with respect to classic bands. We searched for more in Suffering Dusks’ dark realm with the band’s vocalist Mauricio Figueroa.

Mauricio, Suffering Dusks is a seven-year-old death doom band from Chile. Who stayed at its cradle? How was it started?

Hello there. Yes, it’s been a while since SD are around, and I’m relatively a newcomer. JP Guerra is the founder of the band and he says to me in this regard: Suffering Dusks came to life in 2012, with the musical intention to capture the essence of Doom/Death Metal of the early ’90s, and in turn, incorporate elements of Dark Ambient to bestow more freshness and originality on our musical proposal.

The meaning of the name of the band comes from the metaphor that day represents life whereas night symbolizes death. Therefore, the lapse where life and death entwine is dusk. Suffering Dusks represents the twilight of our days, the suffering in the face of the prompt night personified by death.

Since the beginning of the band to these days, there have been several musicians who have contributed to the song-writing, and who keep a friendly relationship with the current line-up of the band. 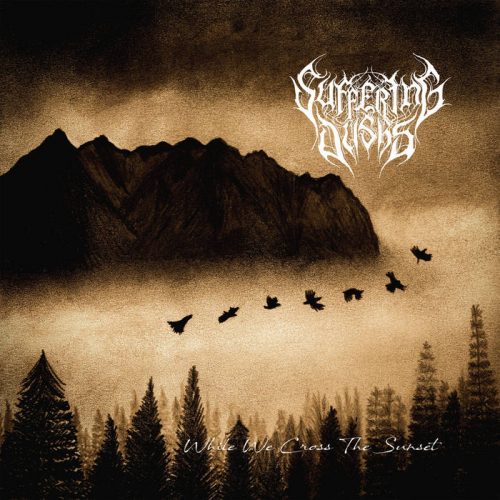 The band’s self-titled demo was recorded in 2015, and the full-length album appeared in 2019. I see that there were changes in the lineup almost constantly. Was that the factor which slowed you down?

I’d say yes. However, the self-titled demo was recorded live, by the engineer of the gig, and it was released mainly by request of fans for downloading (there are people interested in releasing the demo on a physical format these days).

To resume the answer, finding and keeping members in a band is always a difficult matter, and it hasn’t been an exception for us. Some former members have been forced to leave the band due to circumstances beyond our power, and that complicates things when it comes to writing, recording, and performing new material. Right now, we’re quite happy that our current line-up is thriving and willing to make things happen. We’re really enthusiastic about the present state of affairs.

Jean Pierre Guerra remains the band’s only original member nowadays. How did the Suffering Dusks’ concept and sound change through the years as members left and entered the lineup?

From what JP tells me and what I have noticed, the original idea has remained the same. However, every artist who has been in the band since the beginning has contributed to the musical and artistic development of SD. In the end, JP’s original vision seems quite intact, a message of melancholy and doom, reflection and anguish, and how we deal with those emotions. The good quality of our work seemed more evident to us when labels showed interest in the album, mainly the Mexican label Sun Empire.

Your debut album While We Cross The Sunset was finished not long ago. What are your impressions from the first big recording session with Suffering Dusks?

For me, personally, it was a privilege and a delight. I was invited to the project while I was recording with my own gothic metal band, Falling Angels. I felt great, since I could see both processes, and could explore different musical landscapes with my interpretation, however limited it may be. SD’s record was 75% finished when they contacted me (by mistake, I reckon), but the boys allowed me to give the songs my own take. The previous singer had done a really good job with the vocal lines, and it was rather easy to reinterpret the songs.

The album’s compositions are deep, melodic, and multilayered, and besides that some of them are very massive. How difficult is it to compile such big compositions? Do you have one chief songwriter who deals with it?

I came to the band when the songs were already written, but it’s known that JP is the main songwriter, and Matias (keyboard) collaborates a great deal in terms of arrangements and theoretical contributions.

What were your influences during the writing of this material?

JP tells me the main influence comes from life experiences — pain, sadness, overwhelming feelings, in short. The album, conceptually, is the journey of a soul from its death ’til total oblivion. Musically speaking, My Dying Bride is a constant source of inspiration, and also the Chilean band Poema Arcanus and Mar de Grises. In addition, the band has doom inclinations such as represented by Candlemass, Paradise Lost, Mourning Beloveth, Solstafir, Moonspell, Anathema, Tiamat, and bands of the like. For me, personally, Fields of the Nephilim are a strong influence.

Metal-Archives sums up your lyrics as “existentialism, poetic”. Would you agree with that? What kind of feelings do you put in your texts?

It’s difficult to say, because when you write a song, it just flows, you don’t plan what you want to awaken in another person. Nevertheless, those adjectives seem quite fitting. When I sing the songs, I have to get into character and let the feel of the song take possession of me. I need to resort to my own feelings, usually, feelings of nostalgia, despair, wrath and melancholy. I feel relieved after singing a SD song. At length, although I didn’t write those lyrics, I can feel the emotions I have mentioned. 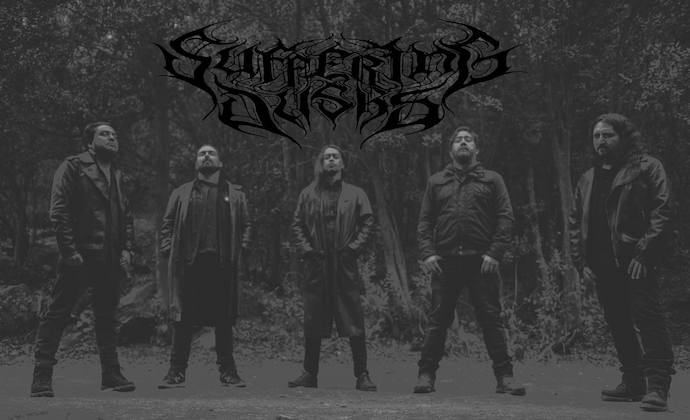 You first released While We Cross The Sunset in a DIY way as a digital album, and now Sun Empire Production has released it on CD. How did you find them?

While We Cross The Sunset, before being uploaded on internet, Sun Empire already had the rights. It was an agreement on both sides, then — we only needed the physical copies. The world we live in these days requires digital releases so the recording can be easily acquired by anyone, anywhere, but we romantics still like the physical format.

Do digital sales through Bandcamp work? Do you find financial support from followers?

Finding finance is not our main goal. We’d rather have people enjoy our music instead. We live in a country in which you cannot live off musical art, and although we’re grateful for the purchase of our digital album, it’s not what we focus on. It’s true that it’s cheaper on Bandcamp, but that way, more people can get the album and hopefully enjoy it, despite not having the CD. For those who can’t buy the physical record, there are other platforms on which you can find our music, such as Spotify, BandCamp, Youtube, Apple Music, etc

Sun Empire Production is a Mexican label. Has their location already helped to spread Suffering Dusks’ vibe effectively in their own territory?

Sun Empire has a worldwide range. It deals with countries from all over the world; therefore, they meet our expectations, that is, global diffusion. Besides, luckily for us, Chile is well-known for its good doom metal scene. This fact allures a greater number of people to look for new independent Chilean bands regardless of whether they belong to major labels or not.

Speaking about promotion, you have shot a video for the “Wandering Souls” song. Did it prove itself? Was it worth the effort?

“Wandering Souls” was a 2-day shooting session, one on location and another in a studio. It was hard work, and exhausting in the end, but a lot of fun. We think the message comes through and it was worth the effort. We planned it well, and it turned out as we expected. It’s strange to see oneself on screen, acting and all, but we liked the result.

The Chilean scene seems to be rich with both traditional and death-doom acts. Do you have bands with whom you prefer to play gigs or maybe do tours?

There are a lot of awesome bands in Chile, and we have great affinity with acts such as Mourner’s Lament, Opus VII, Ancient Doom, Endimion, and Mourning Sun. We have just resumed playing live, so we’ll have to strive for a space in the scene, but so far we have felt quite welcome, and we’re looking forward to playing live with other doom and dark metal bands from our country.

Mauricio, how would you sum up Suffering Dusks’ message?

Speaking for myself, I would say that through pathos and suffering, we aim to exorcize feelings of anguish, as did the old Greeks when they created tragedy. Through pain and reflection, we learn and gain tranquility. JP would say we’re nothing in time, just beings that live day to day and suddenly we’re faced with the dusk of life, and we’ll remember our best experiences and moments until we close our eyes while waiting for nightfall.