(In this new interview Comrade Aleks spoke with the two members of the Finnish band Convocation, whose tremendous debut album was released last year by Everlasting Spew Records and whose second one is nearing completion.)

Helsinki-based torturous funeral / doom death duet Convocation were a nice discovery for me. I missed the initial release of their crushing debut Scars Across, which happened in March 2018, but why not approach it today? It’s grim, it’s massive, it’s an out-of-this world thing.

One of the band’s founders, Lauri Laaksonen (all instruments), takes part in the prolific death metal act Desolate Shrine, and Marko Neuman (vocals) spent his time in avant-garde outfit Candy Cane, and besides that he sings in the well-known band Dark Buddha Rising. So Convocation didn’t jump out from nowhere — this is quite a successful collaboration between two active underground artists. And both of them are here today.

Hi gents! It’s said that you formed Convocation in 2013 as a duet, and both of you had proper backgrounds of playing in different bands. What united you under the grim banner of Convocation?

LL: Yes, plain and simple. Connection on many levels. 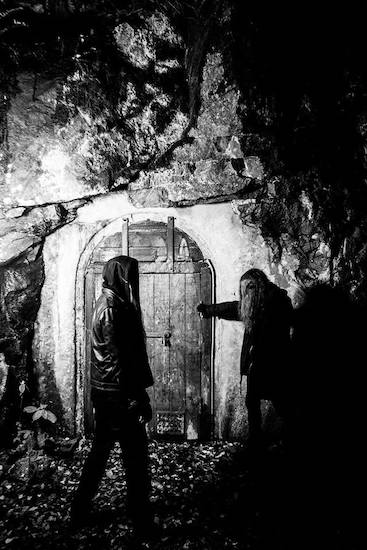 Did you consider Convocation as a band from the start or was / is it a studio project for you? There weren’t other recordings before Scars Across was released in 2018, and I didn’t hear anything about gigs you might have played in this period.

MN: We never mentioned the word project. And LL made clear the fact that he wasn’t interested in doing recordings that would end up somewhere in the hard drive. We were a two-person band from the beginning and still are. The only thing which is different from the basic band puzzle is the fact that Convocation hasn’t played any shows. To us Convocation is unique and we don’t want our work to be exposed in a way what is predictable or a ”just a good gig”. For example, what Waste Of Space Orchestra did at Roadburn Festival over a year ago. That was a show. Convocation deserves a show. Waiting for the offer. Then, let’s see.

LL: The hardest part is to find the right people at the right time. We also have lots of synths/ambience so without those we wouldn’t be really the same band on stage. And there lies the problem — I don’t know enough keyboard players who share a common vision with me. We could, of course, use a backing track but I’m not too much into that idea to be honest

We did lots of demoing before Scars, but they were never publicly released. Different songs, different moods.

Scars Across was published by Everlasting Spew Records, and the label compares Convocation with diSEMBOWELMENT and Hooded Menace. Subjectively you tend to a torturous combination of funeral and death-doom which is closer to Ophis and sometimes to not that psychedelic Esoteric. What were originally your main influences? Or rather, what kind of sound did you want to achieve on this album?

LL: I didn’t really listen to those kinds of bands you mentioned. I was deep in the death and black metal cave at that time and wanted to do something different. While I write music, I stop listening to music, so that’s why doom in its various forms were not inspirations per se, even if the outcome is labeled as that.

I approach song-writing in a way that every song could be visualized as a story of sorts. The drama and its different layers, must be there. Songs need to endure multiple listens so that there’s something new to find at each go.  So it is / was a song-oriented approach but in a different way than it’s traditionally perceived.

The main influences at that time were probably the same as now, ranging from movie soundtracks to classical music, ambient(ish) stuff, sprinkled with a small amount of whatever metal tastes good at the moment. But mostly non-metal. 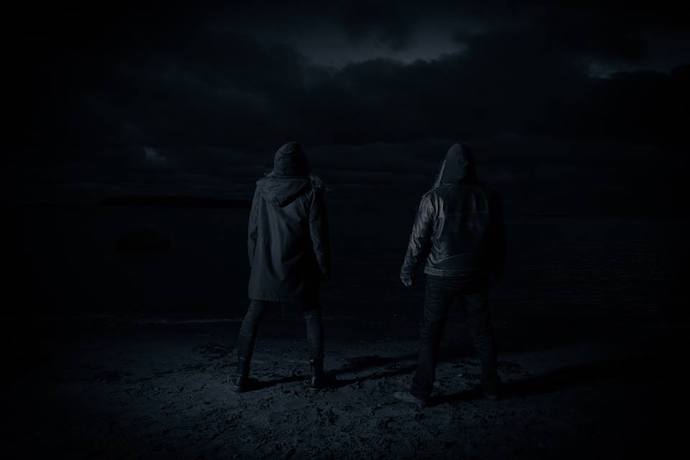 The album consists of four massive tracks with a total duration of 50 minutes. That’s not something new in the genre, but as I understand it you recorded and mixed it DIY. What kind of difficulties did you face working on it?

LL: The biggest grievances come from the most boring things, like a broken microphone during a drum session, DAW is crashing, guitar doesn’t hold tuning that well, etc. When you deal with all of those things AND simultaneously strive to capture the best performance you can, at times it’s too much to do everything at the best 100% level. Thankfully my recording arsenal and skills get better and there’s less and less things that will go wrong at each session. Still, especially recording drums alone might be a pain in the ass when there’s no-one observing and you might end up with a lower tuning on snare than the song started with, haha.

So you recorded the album in your home studio, right? As I see, only the mastering was done at Resonance Sound Studio. What made you choose that one? Had you already worked with Dan Lowndes before?

LL: Yes, it was recorded in Desolate Dungeon — which is our rehearsal place / mobile studio. I have worked with Dan on, I think, three Desolate Shrine albums (also mastering), so that was an easy call.

Did you already have Everlasting Spew Records in mind when the album was finished? Or did you work in the regular way of sending demos / promos to any label you could?

LL: We had nothing in mind back then. I was ecstatic that we actually finished the album and hadn’t thought about the whole label thing. It’s something I really don’t enjoy — trying to sell yourself with pompous statements and hyping the shit out of your own music. It’s… not for me. We ended up writing a short introduction and put some artwork/music together as a package and sent it to a few, maybe 3-5, labels.

I knew Tito from Everlasting and he proposed that they could release it. We really liked the energy and the vibe the guys had and dropped other potential talks and just went with Everlasting. Easy for us and that turned out to be a good solution.

The album’s artwork is simply stunning, and I see Lauri did it himself. How would you connect it with the albums’ themes? Are your lyrics as abstract as the artwork, or do you have some clear plot behind it?

LL: Thank you so much. M can answer the question better than I, but there is a theme of sorts behind it all. As the artwork, lyrics, and music are a bit on the abstract side.

MN: The lyrics on that album are mostly personal, like all my lyrics are. My world was coming to an end, but there was a little light at the end of the tunnel. I survived. So, the cover and lyrics go hand in hand. 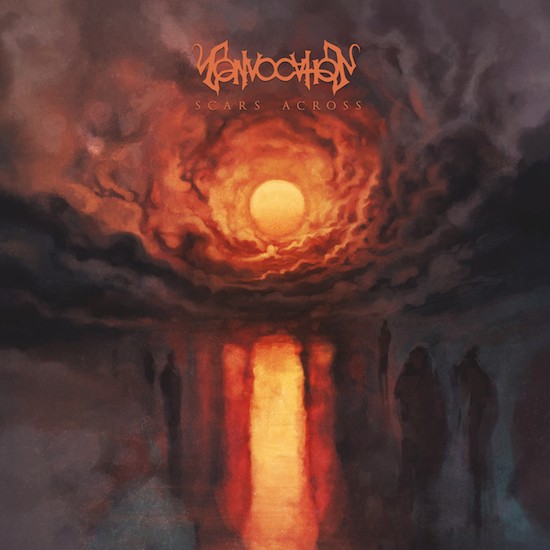 What was the reaction to Scars Across? Do you follow the feedback and does it motivate you to move further with Convocation?

MN: I do read some comments from the listeners now and then. Those matter and motivate, of course.

LL: Yeah, sure I follow feedback. We are a small band and so we are not plastered all over internet forums and pages of every magazine, so I definitely don’t get bored receiving feedback and reading reviews. Instead, it’s nice to hear what people think and how they connect and understand the album themselves. Scars is a hard album to grasp and it’s not for everyone, so it brings joy to my heart if someone “gets it”. And if not, interpretations are also entertaining to hear.

How does working with Convocation inflict on your inner life? Let’s say, is it about self-purge, catharsis, or is it following the example of Doom Cult founders?

LL: Following bands, people, institutions, and movements is counterproductive — at least in our case. Even if some argue “you are not so original”, which might partly be true, it all comes from my heart and passion. We have a long background in music — both doing and consuming it — and we follow art, watch movies, enjoy nature, etc. This all distills into something that we are.  It is our interpretation of our inner life and experiences. And this comes out as doom metal of sorts.

I’ve seen that you have finished recording vocals and other instruments for the next album. What’s new in what you prepared this time? Does the new material keep the line of Scars Across?

MN: From the vocal side: More angry, more vocal ranges, more evil. And as a two-person band and comparing to Scars Across, we’re better, stronger, and more confident.

LL: Yeah, I think the vocals are way more varied and kind of crazy, haha. M has a point — Scars was the first iteration of us doing music together and for this upcoming second child we knew better where to go, what to do. What works for us, what doesn’t. That gives more confidence to uh, explore.

I am of course pretty biased, but I’d say the new material is more varied. It’s at the same time more serene and melancholic, but the flip side of the coin is unnerving, bizarre darkness. The spine of the album is built on different stages of grief.

You’ve mentioned that guest vocals parts are planned for the new album. Can you reveal details?

LL: Hah, not yet. He’s a friend of both of us and active in the Finnish doom scene.

Do you have an approximate plan for when you want to get the album released?

LL: We should have quite soon. We would like to do the CD and LP release at the same(ish) time, so that will probably affect the release plan a bit. We are doing the absolutely final touches on the album, so it is safe to say that no amount of fuckery and bad luck will change that.

Which reminds me to take a backup of the mix right now.

Marko, you played in the death-doom outfit Katakombi, and it split up after a series of EPs. What didn’t work with it?

MN: I’m a frontman aka vocalist. That’s what I do. Being a drummer in a band was a phase I wanted to experience, but not stick with for the rest of my life. When I joined Dark Buddha Rising, I immediately realized I belong behind the mic. The rest of the Katakombi guys, who are great people, decided not to continue without me. End of the Katakombi story.

Got you Marko, thanks for making it clear now. I’d like to thank you both for this interview — let’s hope it’ll help to reach a few more listeners. Any final words to put a dot at the end of it?

LL: Thank you for the interview. I’m extremely stoked for the new material and looking forward to releasing it, and I hope that some have time to listen to it when it’s out. Thanks everyone for the support.

3 Responses to “AN NCS INTERVIEW: CONVOCATION”