In September I included the first advance track from Rattenfänger’s new album (Geisslerlieder) in another one of these round-ups (here), and now there’s another one out in the world.

I provided a fair amount of background about this Ukrainian death metal band in that previous post, and won’t repeat it here, other than to say that the line-up consists of the members of Drudkh, Blood of Kingu, and Old Silver Key (joined there by Neige from Alcest), so go check out that earlier post if you’re interested.

The new song, “Les Bons Hommes“, is a heavyweight mauler. After an opening onslaught of deep, bone-grinding riffage and neck-cracking snare beats, the abyssal roaring and blasting kit-work arrive, along with filaments of eerie, moaning tonality. The shrill, buzzing lead guitar creates a feeling of delighted dementia in the midst of all the catastrophic destruction.

Mid-way through, the drumming and the bass work become mountainously heavy, the chords more gloomy, and rising keyboards add an element of stately yet spooky choral grandeur to this bone-breaking brutality.

Geisslerlieder will be released on December 6th by Dark Essence Records. 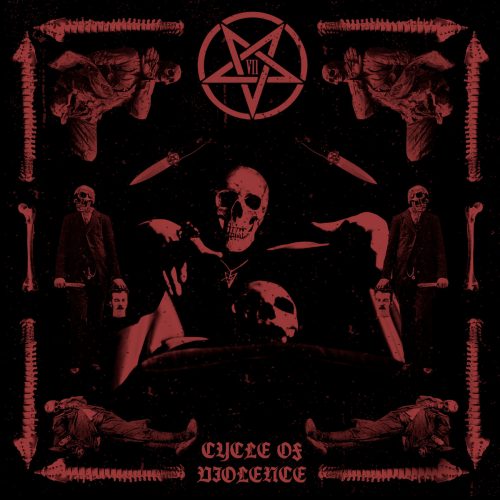 At first I thought this band was the Belgian group Seventh Circle, whose 2017 debut album ripped me a few new ones, but it turns out that band split up and this new Seventh Circle is a two-man outfit from Santa Barbara, California. But based on the song you’ll find below, they seem highly capable of ripping new ones themselves — and committing other unspeakable atrocities.

Oh but they’re not done with you yet. After a strange spoken-word interlude, things get crazy in a different way, although the band revert to a slightly different kind of earthshaking jackhammer-fest to end the song, with some more guitar lunacy thrown in for good measure.

“Death Mask” is one of three killer tracks on Seventh Circle‘s debut EP Cycle of Violence, which will be released by Caligari Records on November 29th. Caligari’s Bandcamp page for the EP recites, “Death doom from California, a blooming sound expanding early Entombed, Godflesh, Helmet and Killing Joke“. 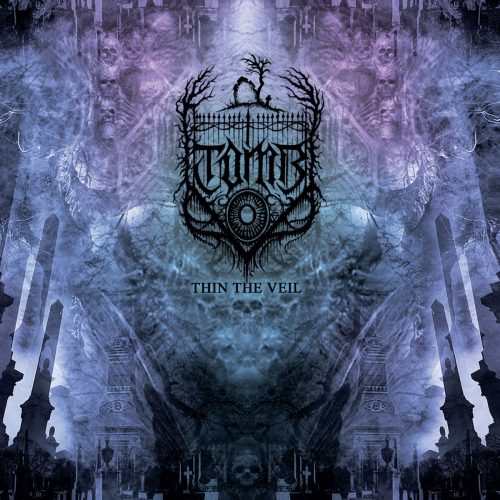 As far as I can determine, I’ve written about Pennsylvania’s long-running T.O.M.B. (which stands for Total Occultic Mechanical Blasphemy) on three previous occasions. The last time was three years ago, when the occasion was the impending release of an album named Fury Nocturnus on the Peaceville label. Now they have a new album named Thin the Veil set for release by Dark Essence Records on January 24th of next year.

The T.O.M.B. quartet of No-One, B. Zimimay, Tyler B, and Samantha Viola have some notable international guests on the new album: Mayhem’s Hellhammer on drums (as on the last album), Norwegian musician Andy Winter (Winds) on bass, collaborations with Craig Smilowski (ex-Immolation) and Duncan McLaren (Venomwolf), and spoken necromancy spells recited by Maurice De Jong (“Mories” of Gnaw Their Tongues, etc.).

I won’t attempt to take the time to introduce you more fully to T.O.M.B., which would take a while to do properly, but will just focus on the new track “Decapitation of the Gods“, which premiered at DECIBEL last week via a music video made by Carl Eek Torgersen.

The snare drum pattern you’ll hear near the beginning drives steadily onward like machine pistons, a pneumatic rhythm (segmented by hyper-speed flurries) that’s the foundation for a dense blizzard of sound, within which delirious and diseased sonic emanations can be heard, writhing and whimpering in a mad fever, along with proclamations uttered in ugly demonic snarls.

Things change a bit near the end, when void-like tones waft overhead, but mainly this seems like an effort to induce a trance that will allow something really nasty to enter your mind.

The album’s intriguing cover art was created by Paul Barton. 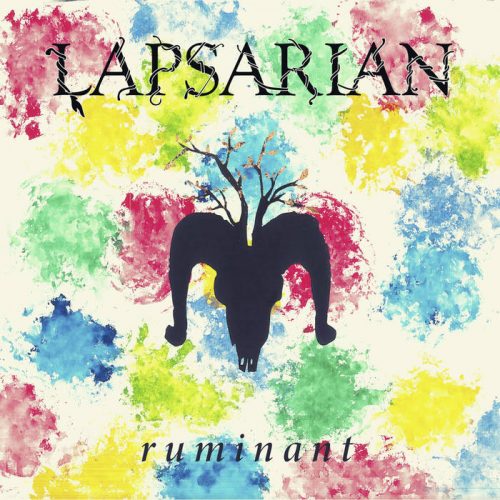 Ruminant is the four-song debut EP of Lapsarian, a trio based in Washington, D.C. (congrats on the Nats!). They’re very up-front about the fact that they can’t be pinned down stylistically. They write:

“From the melancholic post-rock that launches “Godspeed,” to the flensing progressive black metal of “Deadseer,” the cathartic post-metal release of “Allegory of the Cave,” and the near-psychedelic doom of “The Accomplice,” Ruminant offers something for everyone and does so with aplomb, with healthy injections of prog, sludge, and even blasting grind along the way”.

Whether such calculated diversity is a good idea for an upstart band is debatable, but at least in the case of “Deadseer“, the one song you can listen to now, they do handle themselves with aplomb. 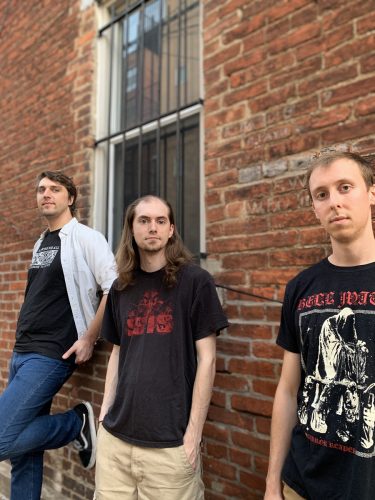 The crystalline, dancing guitar interplay at the outset is mesmerizing, but the song gets orders of magnitude heavier and more catastrophically pounding, paving the way for a queasy guitar lead to slither through your sensorium while the vocalist vents absolutely vicious growls and crazed cries.

The song twists and turns in proggy fashion, shifts gears relentlessly, and changes the fretwork on a dime. The music comes to have a near-experimental quality in its crazy adventurousness, and a near-hallucinatory effect on the listener, though the bursts of blasting mayhem are brutishly obliterating. There’s also an extravagant (and theatrical) surprise coming in the vocal department before you reach the end, which sent chills down my spine and stood up the hairs on my arms.

What begin in such beautiful and mesmerizing fashion turns into something that sounds like pure evil. I haven’t yet discovered what else the band get up to in those other three stylistically divergent tracks, but I’m damned sure going to find out after listening to this one.

Ruminant will be released on November 22nd. 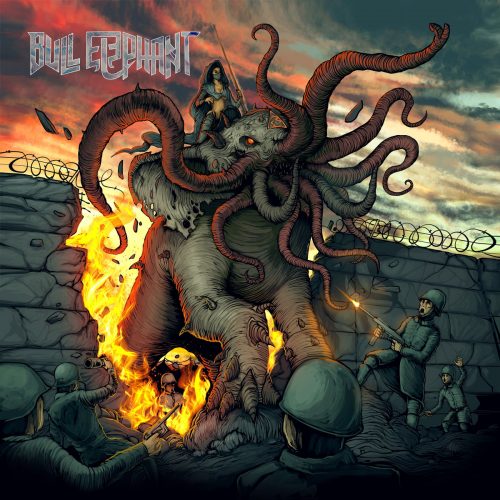 The concept for the self-titled debut album of the anonymous London-based collective Bull Elephant, coupled with the cover art (by All4Band), induced me to listen to the music you’ll find below. Here’s the concept, as described by the band:

“Bull Elephant is the story of a slain African elephant that occultist Ahnenerbe SS attempted to bring back from the dead as a new form of battle asset. However, before re-animation could be completed it was intercepted by a mysterious witch-shaman, pursuing her own agenda and redirecting the undead creature’s purpose.

“Think of the background concept as Raiders of the Lost Ark set to a progressive doom soundtrack where Judeo-Christian mythology is replaced by the even more sinister universe hinted at in the writings of H. P. Lovecraft…. with Nazi assault wolves.”

That description will better enable you to follow the imagery in the lyric video for the title track, which opens the album. 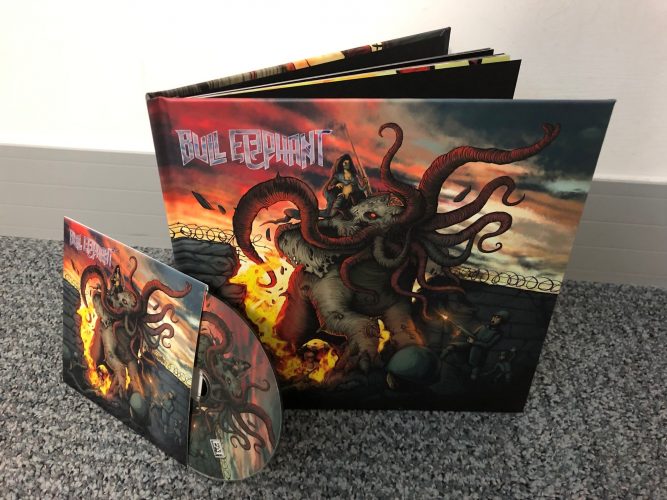 Whoever does the vocals in the song (and maybe it’s two or more people) creates quite an extravagant range of sounds, from ferocious, cavernous growls to scorching screams and sky-high singing (among other things). The music is also wide-ranging, from catastrophic doom bludgeoning to placid strumming and picking that glistens, as well as juggernaut rampaging and a flow of mystifying majesty. There’s also a beautiful instrumental at the end, right after you think the song has come to a stop.

A second track named “Construct of Chaos“, which immediately follows “Bull Elephant” in the running order, was released a few days ago, and I’ve included that one below too. It’s a multi-faceted piece as well, and well worth your time.

Bull Elephant will be released on November 29th by Eat Lead and Die Music.