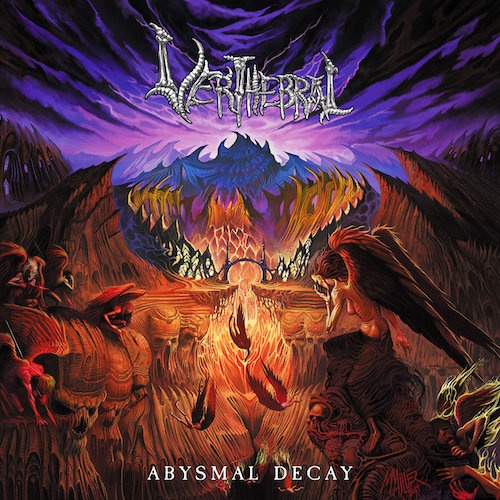 “Prepare yourselves for a death metal rocket-ride that may leave your eyes rolled back in your head, your teeth bared in your frothing mouth, your head banging in a fury, your body convulsed in a seizure.” That’s how we began introducing our June 2017 premiere of a track off Verthebral‘s debut album, Regeneration. It’s not a bad way to introduce today’s premiere either, because in the two-plus years since their debut release these high-octane death-dealers from Paraguay haven’t mellowed in the slightest.

The song we’re presenting today — “The Art of Perversion” — comes from the band’s new album, Abysmal Decay, which has a December 27 release date via Transcending Obscurity Records. As you can see, the colorful cover art by Marcos Miller is an eye-popping come-on for the album, and the music is just as hellishly attention-grabbing. 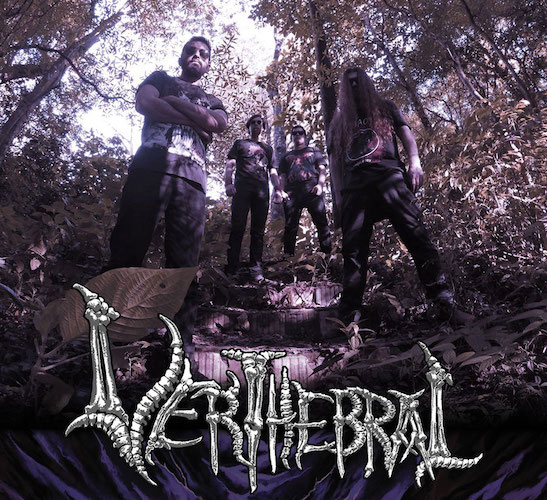 If you’re unfamiliar with Verthebral but are a fan of the kind of South American death metal represented by the likes of Krisiun and Rebaelliun, or the tender mercies of Morbid Angel, Deicide, and Hate Eternal, their music should prove to be savagely appealing.

“The Art of Perversion“, in particular, is absolutely vicious, and a big adrenaline kick, too. The band hammer and rip, jolt and scorch, with equal aplomb, delivering riffs that writhe, seethe, and jab like a high-velocity nail gun, backed by athletic drum variations, all of them delivered with bone-smashing force. The song is accented by eerie wailing solos, and draws an extra dose of barbarity from the vocalist’s bestial growls and howls.

Unexpectedly, the song’s mid-section takes a sharp turn as the plundering rhythms vanish, replaced by the creepy, morose reverberation of guitar picking and the sounds of women crying — just a brief atmospheric twist before the vicious mauling and spinal trauma resume.

As usual, Transcending Obscurity is offering the album in a variety of formats, all of which are enriched by that wonderful Marcos Miller cover art. Check out the offerings via the link below, and enjoy “The Art of Perversion“, along with a stream of the previously released title track.