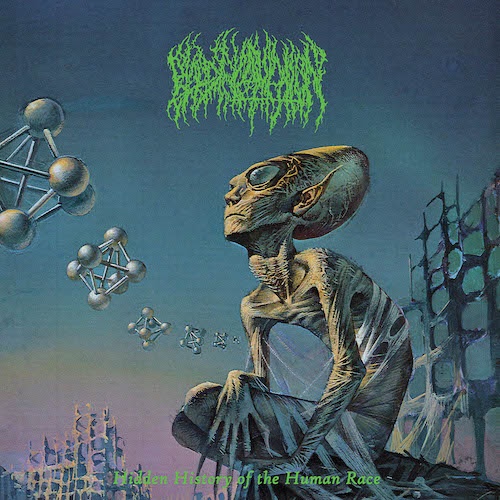 (We present Andy Synn‘s review of the new album by Colorado-based Blood Incantation, which will be released on November 22nd by Dark Descent Records (NorthAm) and Century Media (Europe), and features artwork by Bruce Pennington.)

The rapid rise of Blood Incantation can, when all is said and done, be attributed to a combination of a few different factors.

First and foremost, of course, is that fact that the Colorado quartet are just a fantastic Death Metal band. No caveats, no equivocations.

They’ve got the technical talents, they’ve got the songwriting skills, and, perhaps more importantly, they’ve got just the right blend of sounds – proggy enough to keep themselves from being boxed in with the rest of the “old school” revivalists, but “classic” enough to appeal to the nostalgia-hounds – to reach a surprisingly wide audience, both young and old.

Then there’s the group’s blissfully baked, “I’m not saying it was aliens…”, aesthetic which, when combined with their impressive songcraft and easy meme-ability (the scraggly logo, the hesher-friendly merch designs, the far-out ’70s sci-fi artwork) has given rise to a near-perfect storm of viral fame and critical acclaim that’s seen the band go from “relative unknown” to “next big thing” in just a few short years.

And while there’s definitely a little bit of home-grown hero-worship going on with some of their more rabid (typically American) fans, the truth is that the band’s highly-anticipated second album makes a strong case for why you need to start believing the hype.

Well, most of it anyway… 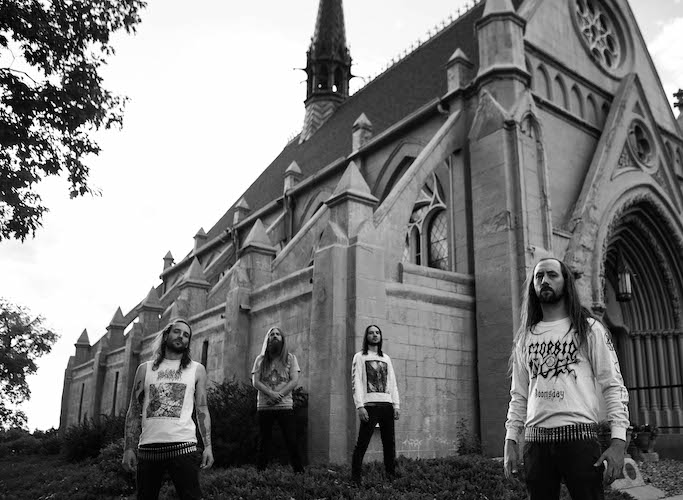 The Blood Incantation we encounter on Hidden History of the Human Race is a slightly different entity to the one we’ve met before.

The most notable example of this, of course, is the climactic eighteen-minute monolith which makes up pretty much the entire second half of the album… but we’ll get to that shortly.

Before then we’ve got to deal with three tracks which represent the band at their heaviest, hookiest, proggiest, and most atmospheric.

Opener “Slave Species of the Gods” is the album’s most savage and straightforward cut, combining an array of humongously heavy riffs with some mercilessly melodic motifs, equal parts Mithras/Mobid Angel and Death/Decrepit Birth, to create a song that’s easily the equal of anything from Starspawn.

It’s the Death Metal equivalent of a “tight-five”, letting you know exactly who the band are in their simplest, purest form, and immediately demonstrating all the little (and not so little) improvements and evolutions that have occurred.

Drummer Isaac Faulk in particular seems to have upped his game, and upped the ante, delivering a powerful performance that’s a pleasure to listen to without pulling the focus away from the rest of the band’s similarly impressive exploits.

“The Giza Power Plant” is a proggier and more complex piece of work, which leans even more heavily on the band’s Finnish and Floridian influences, whose second half finds them embracing a more avant-garde use of melody and brooding ambience which acts as a counter to the mind-bending, finger-snapping fretwork which dominates the song’s opening few minutes.

This more atmospheric and experimental approach is then taken to its logical conclusion on “Inner Paths (To Outer Space)”, whose introspective and introverted, semi-instrumental approach showcases a very different (though not entirely unfamiliar) side to the band.

In fact I’d even suggest that “Inner Paths…” would have made an even more striking opener, purely because which it would have challenged the expectations and preconceptions of the band’s fanbase.

But that’s neither here nor there.

What you really want to know about, I’m sure, is “Awakening from the Dream of Existence to the Multidimensional Nature of Our Reality (Mirror of the Soul)”, which represents not only the band’s attempt to outdo Nile in terms of excessively wordy/nerdy song titles, but is also easily/arguably the best thing they’ve ever done.

It’s not just the audacity involved in attempting an eighteen-minute track – truth be told there’s a point a little under half-way through where the band could have split it in two without really losing anything – but the fact that giving themselves this extra space in which to work, not being committed to a specific structure or end-point, has allowed them to explore the outer limits of their sound more fully than ever before.

Of course, this could all have gone horribly wrong (no-one wants to listen to some stoner’s self-indulgent, stream-of-consciousness ramblings set to an array of random riffs after all), but, against all the odds, “Awakening…” is simultaneously the most intense, intelligent, and intriguing track the band have ever written.

The brilliance of this track, however, is both a blessing and a curse, because it’s presence on Hidden History… seriously threatens to overshadow the rest of the album.

In a sense Blood Incantation have become victims of their own success here, having raised their game so much with this one song that the rest of the album (brilliant though it may be) seems destined to play second fiddle to it forever.

Still, when the biggest complaint against your new album is that parts of it are too good, you ‘re definitely onto a winner.

Ultimately while I may not be fully on the “album of the year” bandwagon like some people (I still think it’s missing one more track before “Awakening…”, which might have put it over the top), even I have to admit that this album is a superlative example of the Death Metal arts, and fully deserving of all the praise and adulation it’s been receiving.

And although I may never quite buy into all of the hype around the band… well, in the words of Special Agent Fox Mulder “I want to believe.”

2 Responses to “BLOOD INCANTATION: “HIDDEN HISTORY OF THE HUMAN RACE””