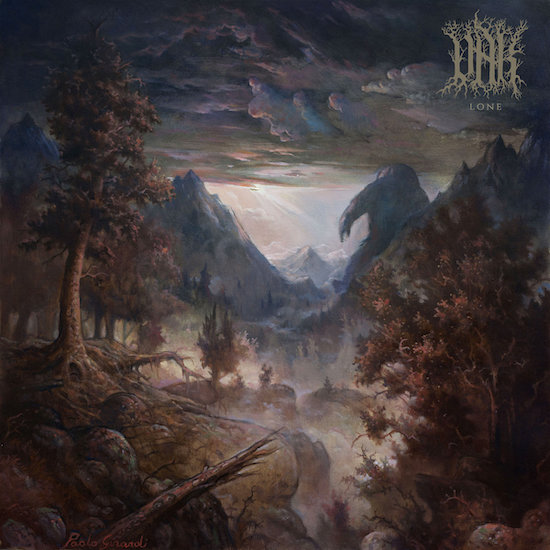 The pleasure of watching talented musicians take their first steps in a new venture, and then grow and evolve, and soon have their works exposed to a wide audience, is one of the more satisfying rewards of participating in a site like ours, particularly when we’ve done our own (very small) part to help them along the way.

In the case of the Portuguese band Oak, we were first drawn to their activities under that name because both members were also part of the terrific black metal band Gaerea — although the music they’ve created in Oak (a blend of mystical funeral doom and death metal) is very different. In the spring of 2018 we premiered a live recording (captured on video) for a spellbinding single called “Sculptures“, which in final form appears on their debut album, Lone. A bit later in the year we also premiered a video of the band’s live set in a chapel within the old Portuguese fortress known as Castelo de Santiago da Barra (and if you haven’t seen that video, you really must!).

And then in January of this year we devoted space to a discussion of an Oak song called “Abomination“, which was released in connection with the announcement that Transcending Obscurity Records would be releasing Lone, and that the Italian maestro Paolo Girardi had painted a fitting piece of cover art for the record. Now it’s our pleasure to premiere another of the four tracks on Lone. This one comes second in the running order (just after “Sculptures“) and its name is “Mirror“. 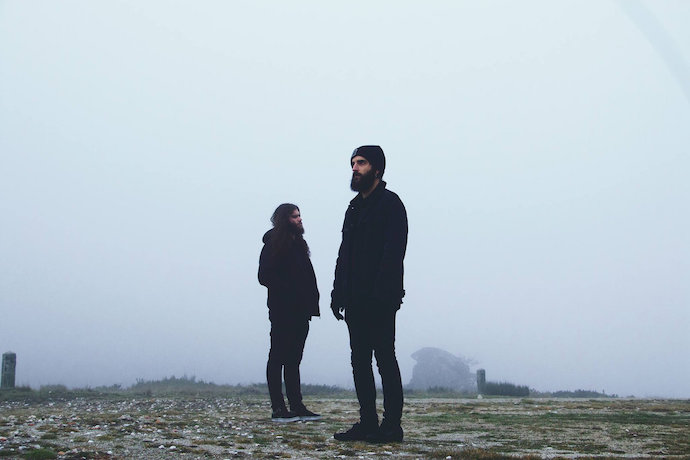 Oak have already proven that they are formidable spellcasters, and equally capable of sending chills up and down the spine, and of creating the kind of harrowing tension and fear that comes from the approach of a looming catastrophe. Consistent with the genre forms they’ve embraced, they are also adept at sinking their hands down deep into those dark places where we try to bury our past miseries and grief, and pull them back up to the surface. On the other hand, if loss and hopelessness aren’t buried but instead things you live with right now, their music becomes a powerful form of catharsis, and perhaps even healing.

“Mirror” puts all these talents vividly — and expansively — on display. At more than 19 minutes in length it’s wide-ranging in both its sound and its emotional reach. Loneliness and isolation inhabit the music, and so do dread and despair. Isolated reverberating tones weave webs of cold, mesmerizing beauty. Abrasive chords and crushing percussive blows build moods of anguished resignation and regret. Sludgy bass lines and slow, moaning melodies pull us inexorably into sodden swamps of surrender.

Guitarist Guilherme Henriques vents harrowing roars and desperate howls from cavernous depths, and you can feel Pedro Soares drum strikes like heavyweight punches to the gut, but the ghostly melodies that surface and re-surface create forlorn musical reveries that become hypnotic. One imagines pale arms enfolding us in a chilling embrace as we drift down into dark, frigid waters, guiding us to an airless nether-realm lit by unearthly glimmering light.

Near the end, the music becomes catastrophically oppressive. The drumming becomes torrential, Henriques‘ vocals rise to heights of frightening intensity, and there’s something like determined fight in the riffing, almost as if capturing a final, spasming struggle against everything that’s gone wrong — before we give out, and that chilling downward drift resumes.

One of the best things you can say about a composition as long as this one is that while listening you lose track of time. Even better is when the music itself sounds timeless. And both things are true of “Mirror“. 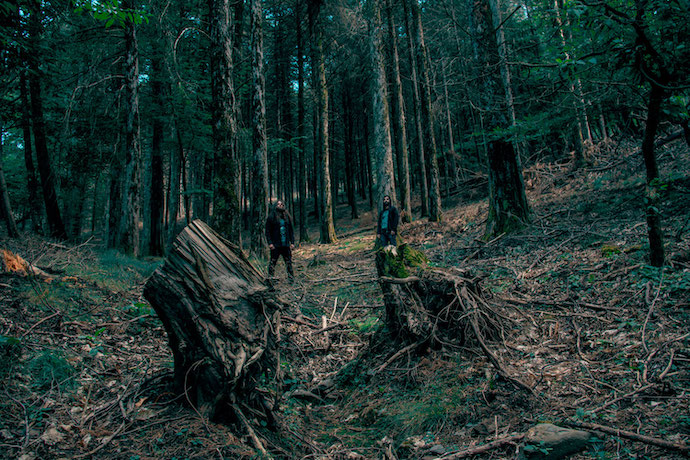 Transcending Obscurity Records has set December 20th as the release date for Lone. The album was recorded, mixed, and mastered by Ricardo Oliveira at Stone Sound Studios. You’ll find pre-order options below, along with the video stream of “Aboination“, and of course today’s premiere of “Mirror“.

One Response to “AN NCS PREMIERE: OAK — “MIRROR””