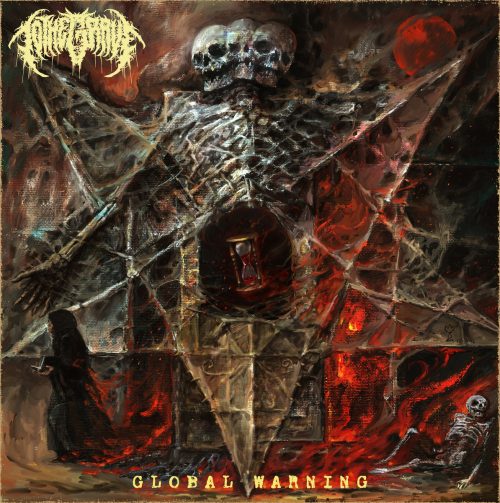 (To the Grave come our way from Sydney, Australia, and this review of their new album (released on November 7th) comes our way from Andy Synn.)

I’ve been slowly but surely compiling my “End of the Year” lists over the last few weeks (you’ll get to see them very soon, in fact) and have reached a couple of interesting conclusions.

One of which is that there really hasn’t been much of the old ‘core that’s grabbed my attention this year.

The new Carnifex is solid (if a little uneven), as is the new Whitechapel, while the new Osiah finds the band stepping up their game, without reinventing the wheel. And I’ve heard a few good things about (though I haven’t actually heard) the new Despised Icon too.

But overall nothing has really blown me away.

Global Warning, however, is a welcome exception to this rule. 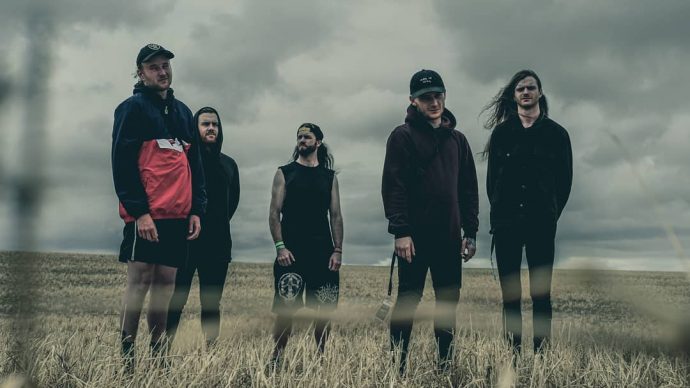 Pinning down exactly what it is about To The Grave which makes them stand out from the crowd is oddly difficult.

After all, on a purely superficial level their sound sticks firmly to the fundamentals of the Deathcore style. It’s all low-tuned, chunky chuggery and wiry, thick-stringed tremolo lines, topped off with an array of shrieks and snarls and gut-wrenching growls and underpinned by some rapid, rhythmically adept drum work that blasts and bounces and breaks down as required.

And yet the band seem to possess an inherent intensity, an organically-derived heaviness, that leans more towards the “Death” than the “-core” side of things, positioning Global Warning that little bit closer to Cattle Decapitation than Carnifex in the grand scheme of things.

That last point of comparison is particularly fitting when you consider the ecological, ecocidal, bent of the band’s lyrics, written and performed with such raw fury by vocalist Dane Evans that you can practically feel the pathological passion bleeding out of the speakers on every single song.

It also helps that it’s not just Evans who clearly means business here, as the rest of the band also seem just as focussed and just as furious as their frontman, ensuring that the more musical elements of the album are (barring the occasional bar of stock, staccato stubbornness) just as electrifying as the howling, all-too-human rage which drives it.

Early highlights include attention-grabbing opener “Holocaustralia” and the absolutely massive “Pest Control” (arguably one of the year’s most punishing slabs of pure, unadulterated heaviness), as well as the menacingly melodic “Slaughter Forever”, with the latter two also showing off a major Suffocation influence (to my mind a key feature of almost all the best Deathcore bands) in their chunky, churning, bowel-loosening riffs.

Thankfully the second half of the album doesn’t drop the ball, with “Wastage” throwing some warped technicality into the mix, even as “Skin Like Pigs” and “Lips & Assholes” double down on the bone-headed, slam-tastic brutality, before the whole ugly affair concludes with the gruesomely intense, grimly atmospheric “Seven Billion Reasons Why”, which really does remind me of early Cattle Decapitation as seen through a more modern, Deathcore-inspired lens.

I suppose, in the end, the simple reason that this album stands out more than some of the more famous (or infamous) examples of the genre released this year is that it just feels that bit more visceral. That little bit more vital.

There’s a real connection between the lyrics, the vocals, and the music, that’s hard to deny.

2 Responses to “TO THE GRAVE: “GLOBAL WARNING””