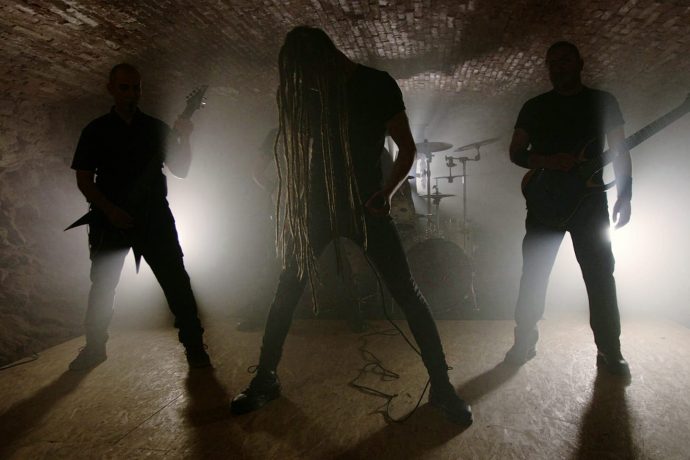 In August of last year, little more than one month before the release of the new album by Bloodtruth (entitled Martyrium), we had the good fortune to premiere a scorcher of a track from the new record — which we introduced in this way:

“As a general rule, generalizing is fraught with risk. For every sweeping statement, someone will come up with a hundred exceptions. Yet there’s more than a kernel of truth in the observation that Italian death metal tends to live in the fast lane. It often seems like the Autobahn of death metal, in which bands with adrenaline for blood race so fast and furiously that the wheels leave the ground, trailing flames. Bloodtruth is a prime example of this phenomenon — and the explosive extravagance of their highly accelerated attack is indeed phenomenal. Witness this new song we’re bringing you today through a lyric video.”

And now here we are, more than a year onward from the release of Martyrium by Unique Leader Records, and we again find ourselves in the fortunate position of hosting the premiere of a new Bloodtruth video. This one, handsomely crafted by filmmaker Guglielmo Sergio, is for a song from Martyrium named “Inner Resurrection“. 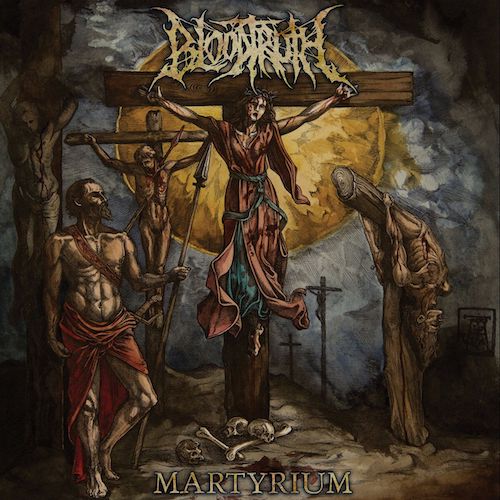 Martyrium is a concept album that “focuses on historical and ethical relevance bonded to the circumstances and facts mentioned in the lyrics”. Moreover, Bloodtruth decided to take into account some of the events narrated in Umberto Eco‘s fantastic 1980 bestseller The Name of the Rose, and its vast number of historical and philosophical references, mostly focusing on the subject of martyrdom. And that background may help in understanding the title of the song that’s the subject of the video. We also want to share the comments of Bloodtruth guitarist Stefano Rossi Ciucci about you will see and hear:

“No words can describe how excited we are and how long we waited for this moment. This video expresses all our dedication and hard work that the creation of our latest album required. We are really proud of the results obtained with this new video, both technically and artistically speaking. We chose the song ‘Inner Resurrection’ since we consider it a very important song for the band. In fact, from a musical point of view, it contains some of the most particular elements of the whole album concerning the riffing and the arrangements.

“We want to thank our videomaker Guglielmo Sergio, as he worked on a death metal video for his very first time getting an excellent result! Personally, it was a really cool experience and my first time as an actor. I even had to learn how to write a script with gothic characters in a very short time, it was really crazy! In the next future we will have a lot of chances to play several of the Martyrium album songs in some really cool festivals; our new collaboration with Jon Knight and The Flaming Arts immediately paid off, thanks to their extreme professionalism. So, check this video out and come to see us at our next shows!”

“Inner Resurrection” does indeed combine many elements of Bloodtruth‘s music — the bludgeoning, bone-breaking power of the rhythm section, the jolting and jarring impact of hard-slugging riffs, the atmospheric quality of slithering and sinister melodies and the unearthly ambience of piercing ethereal tones, the eye-popping intensity of the vocalist’s guttural roars — and of course the breathtaking impact the band generate when they turn on the turbochargers. When they stomp on the accelerator in “Inner Resurrection”, it really will suck the air out of your lungs, so be forewarned.

The video does an excellent job capturing both the explosive power of the music through the imagery of the band’s performance, and the thematic subjects of the song.

Martyrium was recorded, mixed, and mastered by the uber-talented Stefano Morabito (Fleshgod Apocalypse, Hour of Penance), and you can still pick it up in multiple formats via the links below. And to find out how you can catch Bloodtruth on stage in their upcoming tour, follow the band on Facebook.

One Response to “AN NCS VIDEO PREMIERE: BLOODTRUTH — “INNER RESURRECTION””