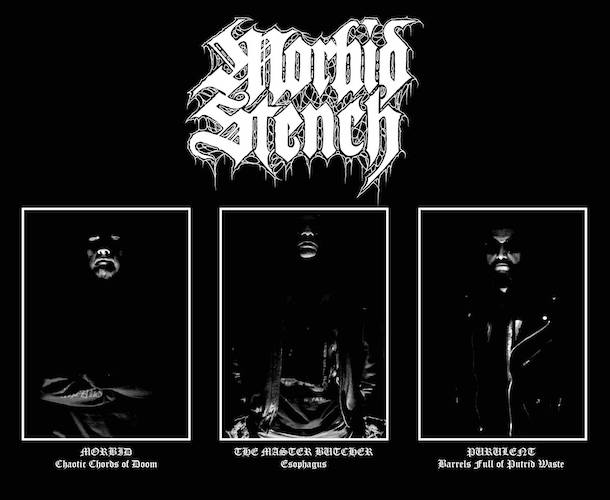 (You may have noticed that during much of 2019 Comrade Aleks has turned his interests in doom in, shall we say, nastier and more deathly directions, and continues that pattern with this interview of The Master Butcher, vocalist of the Central American band Morbid Stench, whose potent debut album was released just a few months ago by Putrid Cult.)

Morbid Stench… Do you feel that taste on the tip of your tongue? A stench of death, doom, and Central American swamps? It’s an international project, as the Morbid Stench members live in both El Salvador and Costa Rica, and are members of such death bands as Conceived By Hate and Insepulto, which names are probably better-known to the NCS audience.

This band is relatively new – it was founded in 2014 and the full-length Doom & Putrefaction, released on September 30th by Putrid Cult, appears to be their first big work. Why not learn more about its rough, straight, and really morbid aesthetic with their vocalist The Master Butcher?

Hi man! How are you? What’s going on in the Morbid Stench lair?

Hello my friend, all good here, we’ve just received the CD and tape copies of our album from the label, so as you may imagine, we’re pretty busy moving things down here.

It’s said that the members of the band live in both El Salvador and Costa Rica. Well, those locations are pretty close, but how did you form the band?

Yes, Morbid Stench is (to use a practical term) the first Central American band that combines musicians from both countries. The whole idea started about 4 or 5 years ago when Morbid (guitarist and main composer) contacted me to do some trades, and from that moment on we became good friends. At a certain point he proposed that I contribute some vocals for a project he was working on back then called Disorder. I ended up recording the voices for two songs in the album En El Rio Del Olvido and despite the fact that Disorder is more a thrash death metal band, we liked the outcome so much, and it was just a matter of time before we started talking about doing a permanent project that ended up being Morbid Stench.

All of you have experience playing in extreme metal bands. What made you slow down and switch to morbid death doom? What are the bands who helped you to form your sound?

Yes, we are three veterans in these ways of the extreme underground metal… Morbid does Conceived By Hate, with whom he has even played shows in Germany, Poland, and Austria, and on the other corner we got Purulent, who has his project called Invocation Of Death and released their debut album last year (2018). Both are death metal bands and really well-developed and managed. In my case, I also do vocals for Insepulto and we have two albums released so far, and also I do Necrogod, with  Rogga Johansson from Sweden (the album is planned to come out by early 2020 via Transcending Obscurity Records) — in both cases death metal too. With this said… Morbid Stench is our the chance to do something different, and to our surprise, it has been received really well, considering the genre is not usual over our latitudes. 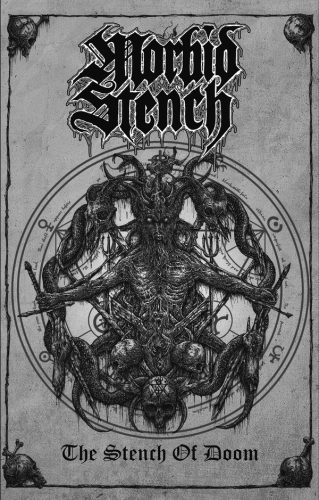 The Stench Of Doom EP was released on tapes in 2016. Did the tape release really help to draw people’s attention to the band?

I think it did. I mean it sold very well considering it came out on a tape format and featured a Central American band playing doom, something not very usual. However, I understand it got sold out quickly, and comments and reviews were really positive.

What’s the story behind the blasphemous The Bifid Tongue of Doom & Death split with Necrogod? How did you cross paths with the ultra-productive Rogga Johansson?

Yes, I do the vocals in Necrogod, so when the chance to do that split came in I just had to ask Rogga to compose a song, something he does very quickly, believe me!!!.

However, the true story of that split was when I travelled to El Salvador in 2017 to play some shows there and also in Guatemala as part of a small tour with Conceived By Hate, Morbid Stench, and also a Colombian band called Lucifera. With them was Diego Estrella, who is the owner of a label called Evil Domain Productions. At a certain point Diego, Morbid & myself were talking about doing something with Morbid Stench and Insepulto, but unfortunately, Insepulto was pretty frozen back then, so Necrogod appeared as the second option, and well, it turned out well because that EP encapsulates very well the essence of both bands in that moment.

Did you play live with Morbid Stench in this early period? What are the specifics of playing in Central America. I know very few doom bands from your region — I’m not even sure that they are active nowadays.

Not long ago you joined the Polish extreme label Putrid Cult. Did you know them through some of your other bands? How did they sign you?

To make things short, once we had the whole album ready, Morbid and me started doing an assessment of possible labels to send promos. One of the labels within our radars was Putrid Cult Recs and well…after getting the songs, Morgul showed a genuine interest, and well… we ended up with an agreement to release our album with his label. 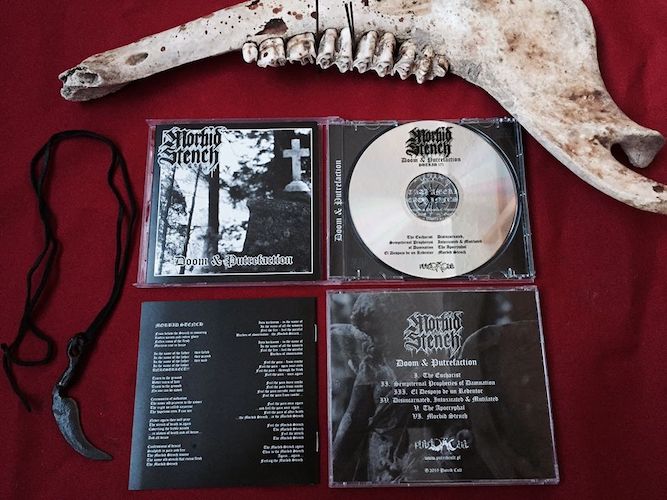 Putrid Cult has released Morbid Stench’s debut album Doom & Putrefaction on both CD and on vinyl, and that’s a damn good result. Did you play a release party or something?

Yes…I must say that is very good for a debut album considering the huge quantity of bands releasing material nowadays. We are waiting the LPs to come, so when we get them it is very probable to have a release party with some friends…surely one in El Salvador and another here in Costa Rica.

Do you feel you can play a tour with Morbid Stench? What’s its prospects?

Definitely…that’s one of our goals now that we have the album properly released. We want to take advantage of the fact that our label is in Europe to try to come up with something over there. DOOM DEATH FROM THE CENTRAL AMERICAN SWAMPS!!!

The album has a strong, heavy, and grim production, and it’s effectively performed. In which conditions did you record this material?

The music was composed/recorded in El Salvador, vocals were unleashed in Costa Rica. The whole thing was later sent to Sweden for proper mixing and mastering. From the very beginning we wanted a different sound, emphasizing some elements related to the fact that Morbid Stench is a Central American band and as such, it has its own sound, sometimes hypnotic but at the same time evil… sometimes mysterious but deadly, just like the venomous bite of some of the most mortiferous snakes we have all over the region… those elements, those ideas, had to be later put into sound textures to define our identity as a band… our unique sound.

There aren’t many options for lyrics when you play this kind of music. How would you sum up the band’s lyrical themes? Is it important for you, or are the texts just fillers for the songs?

In Morbid Stench… and actually in all the bands I am or have been part of… I take care of the lyrics. I am of the opinion that a band has to have a certain overall concept that needs to be consistent in every front, and that includes the lyrics as well. The science of having a band goes by the capacity to connect those different elements towards an overall concept. That’s what makes a band special… something unique… something to step aside from the rest of countless bands nowadays. A band without a concept is like a photocopy of something else… it might be very well done, but lacks its own elements… its own DNA, if you know what I mean.

What’s next? How soon do you want to return to the studio and record new Morbid Stench tunes?

We will enter the studio by early 2020 to record a new song for our second 7″ split EP. After that we’ll see what comes after… new material is being composed as we pursue deeper and heavier fields in our Doom crusade.