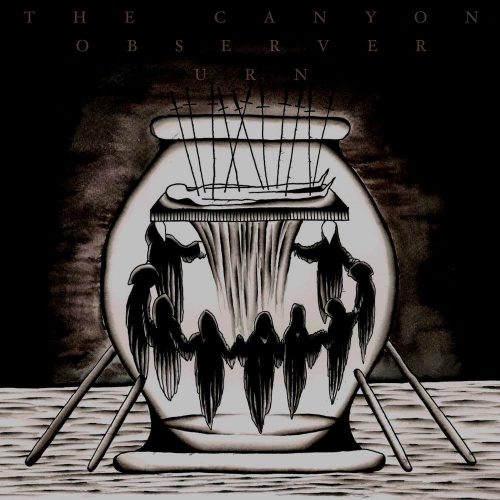 The last time we splashed The Canyon Observer‘s name across our page was 20 months ago, the occasion being a premiere stream of their latest album, NØLL, which was released by Vox Project (France) and Kapa Records (Slovenia) soon after. Now we have a new occasion to share the music of this talented genre-splicing Slovenian group, because tomorrow they will release a massive new single that serves as a gateway between the old and the new in terms of their musical creativity, and we’re presenting a full stream of it today.

This new track is named Urn, and it’s 17 minutes long. The band have told us this about how it was created: “We’ve always been intrigued by free forms and tried to accommodate that into our working method. The willingness to dive into the unknown, to trust each other enough to let go. The risk of failure that comes with this kind of musical expression is important and fulfilling and gives us more room for musical development.” 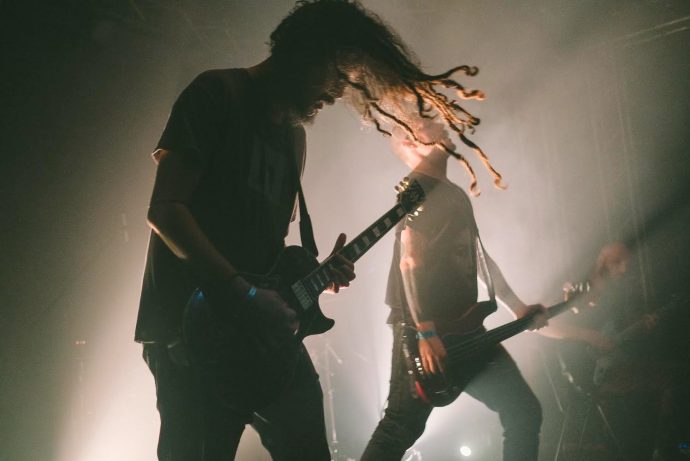 Lyrically, according to the band, “Urn is a monument about the last moments of one’s life as we embrace death and come to terms with the fear of it.” Heavy subject matter, to be sure, and the music is damned heavy, too. The experience of Urn is subject to varying interpretations, but to these ears it seems to channel confusion, fear, madness, violent resistance, crushing resignation, and maybe even a few glimpses of uneasy peace.

True to the method of its creation, there is an undeniable improvisational quality to the music (and the noise). It isn’t methodically structured, and though it does ebb and flow in its intensity and does change in its moods (as I’ve hinted at above), the performers aren’t all moving in lock-step. You can feel that they are sensing each other’s activities, and reacting to them in different ways and at different points of time, moving the music organically, but also bewilderingly.

There is also an almost incessantly abrasive and disturbing quality to the accretions of sound, and to the exploding of them into different scattered directions. Even at the music’s most pensive moments, the emotional resonance is uneasy at best, and brutally crushing at its lowest point. In its most cacophonous episodes, Urn is intensely harrowing. But all of the track’s discomfiting permutations are so transfixing that you’re not counting the minutes as they pass, but instead waiting to see what happens next… and trying to keep your adrenaline in check so you can make it to the end.

And that’s probably more than enough introduction, but I’ve decided to set out a more carefully mapped and less impressionistic (and therefore more tedious) description below, just to satisfy myself. You’re probably better off just skipping it and pressing play. Information about how to get the single is down below, just above the player.

I mentioned the word “accretion”, and that’s how the track begins — through the gradual appearance and coming together of disparate sounds: something that sounds like a zither; unidentifiable clattering noises; the slashing of high-pitched strings; scattered piano keys; perhaps screaming; distorted chord reverberations; thunderous drums; and searing guitar torture. I mentioned “cacophony” as well, and all this comes together to reach cacophonous levels of abrasion, even though the drummer at least briefly does lock into a thumping rhythm

About four minutes in, the sound volcanocally erupts in a surge of blasting drums, flesh-scarring riffage, and tumultuous shrieks — followed by a gun-shot snare rhythm and flurries of fretwork discordance, as well as brutalizing drum pounding, animated bass vitality, and a surrounding searing shimmer of shining guitar melody. The vocals remain unhinged, and that enveloping wash of guitar melody is kind of unhinged too, but also kind of mesmerizing

The band make a bridge to something else, a bridge that sounds like an excavation job at first, and then an astral excursion (though the glimmering eeriness of those sounds is mixed with crazed percussive hammering). The sound mounts to a new cacophony of heated tremolo’d whirring, heavyweight bass mania, bursts of snare vibrancy over a propulsive kick-drum drive, and assorted other percussive tones.

All this subsides to near-silence, but the music becomes loud again — and much slower. You will hear widely spaced low-end detonations and a sinuous but threatening arpeggio, mixed with thick, sludgy bass moaning, gibbering guitar excretions, and moody piano keys. The slow and somber piano melody (with the crash of its own chords) brings the piece to a close. And then you can begin breathing normally again.

Urn will be released on December 24th via the Bandcamp page of Kapa Records, and will also be available on Spotify:

One Response to “AN NCS PREMIERE: THE CANYON OBSERVER — “URN””