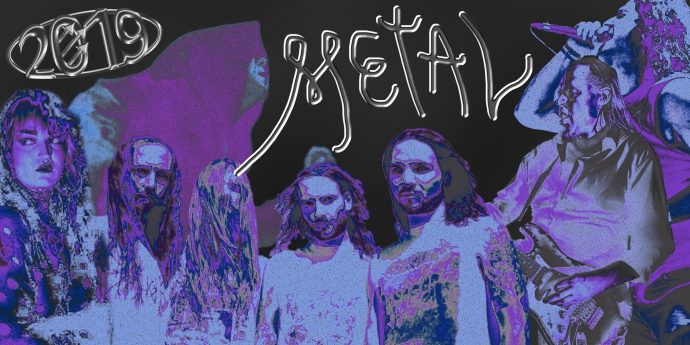 Pitchfork obviously qualifies for the part of our year-end LISTMANIA series devoted to re-publishing lists by “big platform” cross-genre music sites. Founded in 1995 by recent high school graduate Ryan Schreiber in Minneapolis, it has been based in Chicago since 1999 and has been owned by the Conde Nast conglomerate since 2015. From its humble beginnings, it now boasts an audience of more than 7 million monthly unique visitors.

It’s fair to say that most of those visitors aren’t metalheads. The site’s reputation historically was closely associated with independent underground music, and in the last 10 years their Album of the Year award has gone to Kendrick Lamar three times, as well as other hip-hop artists. This year it went to Lana Del Rey’s Norman Fucking Rockwell!.  But as you see, Pitchfork also publishes a list of the year’s best metal.

This year’s Pitchfork metal list includes 14 albums, as compared to 21 on last year’s list. At Pitchfork’s site they’re arranged in alphabetical order rather than ranked numerically, and are preceded by album descriptions written by Sam Sodomsky, Grayson Haver Currin, and Kim Kelly — all of which you can read here.

Of those 14 albums, a grand total of one appeared on Pitchfork’s list of The 50 Best Albums of 2019 across all genres — Blood Incantation at No. 41.

The rest of the list of 14 is a mix of names we’ve seen in many other “big platform” lists and others that have appeared rarely, if at all. It includes a half-dozen albums I really enjoyed this year, a few others that haven’t thrilled me, and still others I guess I ought to make a renewed effort to check out (including that Moon Tooth album I first noticed on Rolling Stone‘s list).

And with that, here’s the list. Your Comments about it are welcome.

Candlemass: The Door to Doom

Obsequiae: The Palms of Sorrowed Kings

Profetus: The Sadness of Time Passing

Ragana: We Know That the Heavens Are Empty