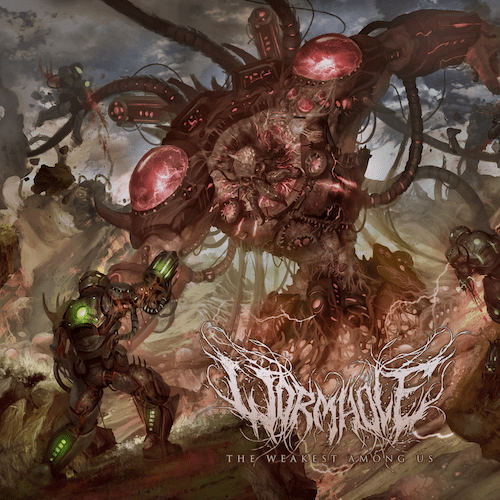 Granted, we’re not even two weeks into the new year, but listening to Wormhole’s new album is hands-down the most fun I’ve had with a 2020 release so far. And as I think about it, I’m hard-pressed to remember an album from last year that was more fun than this one either.

Don’t get me wrong, The Weakest Among Us will also beat you senseless and leave you staggering toward the nearest ER. That’s actually another part of the fun. But the band’s combination of wild ideas and sheer instrumental exuberance with all that brutalizing obliteration is what brought so many smiles to this listener’s (lacerated) face.  And so, it’s with great pleasure that we’re hosting a full stream of the album today, in the run-up to the album’s January 14 released by Lacerated Enemy Records. 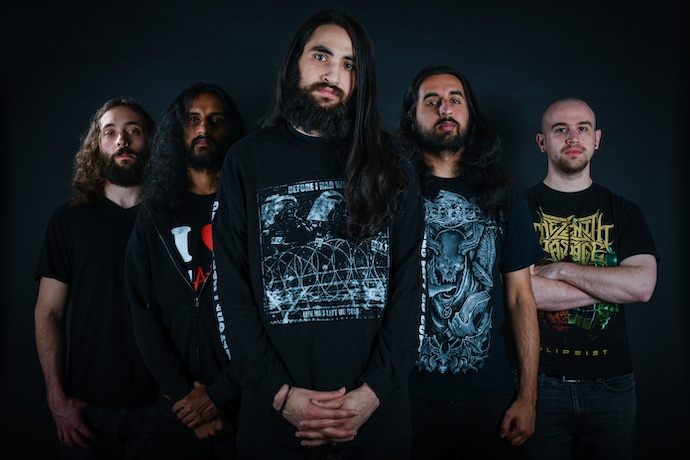 I also got a hell of a kick out of this Baltimore-based band’s 2016 debut album Genesis, about which I wrote: “Prepare to be brutalized and decimated. But also prepare to have your brain scrambled and re-wired to the point that you are suddenly able to understand microwave transmissions from space”. But as good as that album was, The Weakest Among Us is a step up, delivering more of… well… everything… that made the debut such an eye-opener.

There have been a few line-up changes since the first record. For the new record, founding guitarists Sanil Kumar and Sanjay Kumar were joined by bassist Alex Weber (Exist, Svengahli), drummer Matt Tillett, and vocalist Ansh Goswami of NoiSays (bassist Basil Chiasson has joined the band’s live line-up). And all of them are firing on all cylinders.

“CYBERNETIC TECH SLAMMING ANOMALOUS” is the label Wormhole give to their amalgam of slamming brutal death and adventurous tech-death. And what a fascinating amalgam it turns out to be.

The new album encompasses too many multifaceted guitar formulations to count (and why would you want to try and count them?). There are blaring chords, queasy string mutilations, freakish pulsating tonalities, weird and wondrous serpentine melodies, and of course brutalizing, pile-driving, near-atonal percussive pounding. The soloing is always surprising (much like every other twisting and turning permutation the band create), ranging from eerie yet mesmerizing to soulful and sorcerous — and the soloing also becomes decidedly jazzy, with tunings that sound very much like a saxophone.

The melodies do often seem cybernetic (a word that also accurately characterizes the precision of the band’s fretwork and the sharpness of the tempo changes), creating unsettling paranormal atmospherics and the fearsomeness of mechanized war machines originating from off-planet.

As noted, every performer is on fire, and so the nimble and creative bass lines stand out, as does the breathtaking drumwork, which is (of course) obliterating, but constantly changing, shifting from bursts of hyper-fast, bullet-spitting snare-work to thunderous double-bass, riotous rhythmic gallops, and wildly athletic fills. As noted, the band have a pronounced affinity for turn-on-a-dime tempo changes, and the sharpness with which they execute them is a thrill to hear. Throughout all these surprising changes, the vocals keep things nasty by presenting a cornucopia of cavernous gurgles, deep crocodilian growls, and disgusting pig-squeals.

Some songs are more slam-oriented than others (e.g., “rA9/myth”), while others are more in the vein of tech-death extravaganzas (e.g., “D-53”), but all of the songs include elements of both, with some strains in the hybrids slightly more dominant depending on where you are in the album. At all times, however, there is fierce exuberance in the music, and such exhilarating abandon in the fleet-fingered fretwork, so many variations in cadence and mood, and so many wonderful accents richly scattered throughout the tracks (for many of which credit must be given to bassist Alex Weber), that the album is — as I said at the outset — an absolute joy to experience.

There’s a different kind of joy spawned by the frequent moments when the band just clobber the ever-living crap out of you — the kind of joy that every good metalhead gets from becoming the victim of skull and spinal trauma. The juxtaposition of unpredictable, head-spinning guitar escapades, jaw-dropping in their execution, and thuggish percussive beatings is in fact a big reason why the album is so damned much non-stop fun. And if you live for sore-neck syndrome, you’ll get plenty of opportunities to bang your head like a lunatic — but don’t expect to lock into such grooves for very long, because the paths followed by these dudes are constantly veering.

As noted, Lacerated Enemy Records will release The Weakest Among Us on January 14th, in a variety of formats and accompanied by a variety of merch, all of which benefits from the cover artwork of Lordigan Pedro Sana.