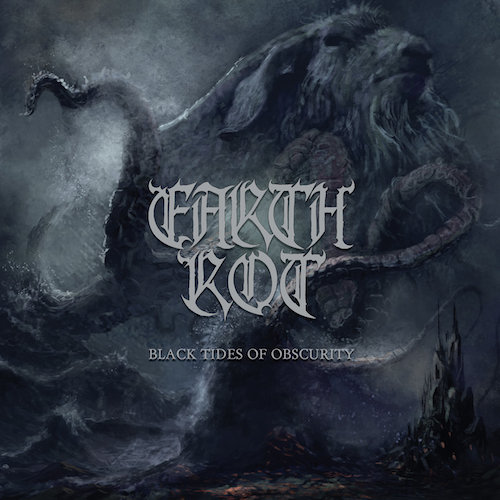 The first four songs in this collection all come from bands whose previous releases we’ve acclaimed here at the NCS hovel, and all of them now have new full-lengths headed our way in 2020. The first of those is the Australian blackened death metal band Earth Rot, whose new album Black Tides of Obscurity will be released on March 6th by Season of Mist. The first advance track, “Dread Rebirth“, is the album opener, and it arrived along with a video that’s full of interesting visual effects. 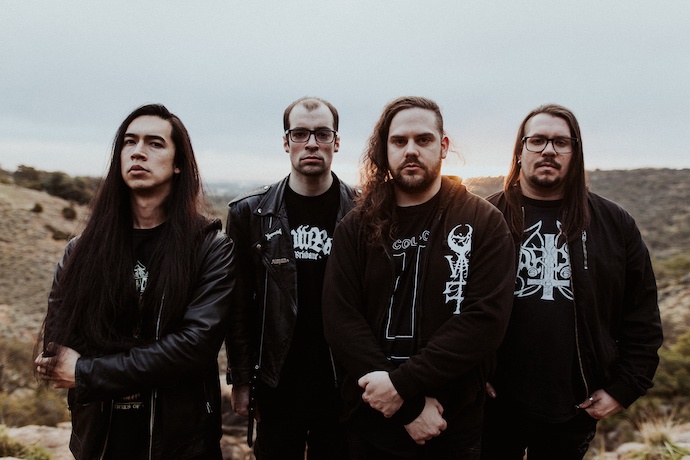 The music is interesting too, moving from a haunting guitar harmony into a heavy, battering, HM-2-flavored mauling laced with gloomy chords and eerie dissonant leads. The song builds in intensity, the drums hammering, the riffs roiling in a demented frenzy, and the roaring vocals soaring into screams. There’s an apparitional interlude in the song, accented by a spooky solo, in keeping with the overall ominous and paranormal mood of the track. When the music bursts into phosphorescent flames afterward, it becomes even more frightening and unhinged.

Credit for the album cover art, which seems both Lovecraftian and goatish, goes to Khaos Diktator Design.

The Indonesian atmospheric black metal band Pure Wrath has been a favorite of mine since I discovered (and wrote about)the first advance track from the band’s 2017 debut album Ascetic Eventide. Later in 2017, we premiered Endless Journey, a split by Pure Wrath and Onirism that only reinforced my admiration for the musical talents of Pure Wrath‘s alter ego Januaryo Hardy, and the band’s next album Sempiternal Wisdom (2018) was also superb.

What’s coming on March 6th (via Debemur Morti Productions) is a new Pure Wrath EP named The Forlorn Soldier“, which the label describes as “a teaser to the band’s third full-length”. Conceptually, DMP also explains that the EP is an “exploration of events behind a brutal incident during the ’60s genocide in Indonesia where male members of a family were kidnapped and ‘vanished’ by a tyrannical army in the name of ‘so-called nationalism’”. Notably, the EP features guest drum work by Yurii Kononov (ex-White Ward), and piano contributions by Dice Midyanti (Victorian).

Perhaps the most memorable aspect of the song below, “When A Great Man Dies“, are Hardy‘s vibrant clean vocals, and the song introduces them right away. But that’s not the only memorable quality about the track. The sheer propulsive energy of the song is powerful, the riffs are searing, and the shrieks are violent, but the rippling keyboard melodies stand out just like the reappearing clean vocals. The more subdued moods of beleaguered grandeur also make their mark, and the sorrow in both the piano melody near the end, and the beautiful singing that precedes them, is unmistakable. 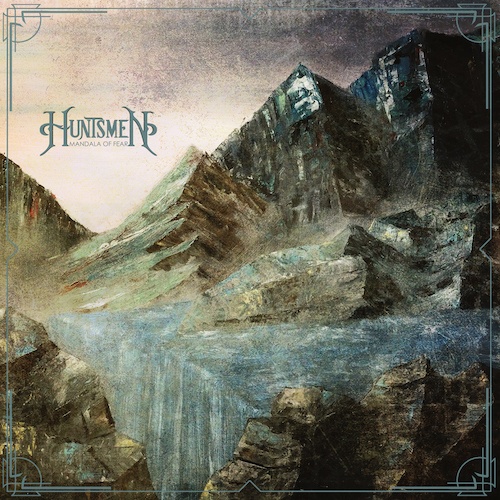 Erstwhile NCS contributor Grant Skelton induced me to give Chicago’s Huntsmen a fair shot when he put their debut album American Scrap on his year-end list for 2018, and that turned out to be a very fortunate discovery, because I’ve thoroughly enjoyed that genre-bending album of “Americana metal”. I owe Grant another round of thanks for making me aware (even before I found a press release) that Huntsmen’s second album is now slated for release on March 13th by Prosthetic Records.

The new album, Mandala of Fear, is a big one (there will be a double-LP). The Prosthetic press release enticingly says: “[T]he album explores themes of trauma, recovery, and – ultimately – survival, through the lens of a fully formed sci-fi-esque tale set in the near future as unending desert war crumbles into apocalypse. The story is further told through a 32-page graphic novel that accompanies the 2LP set. Having enlisted Aimee Bueno to provide vocals for the final track of previous album, American Scrap, her role has since evolved into being an equal participant in the Huntsmen adventure”. 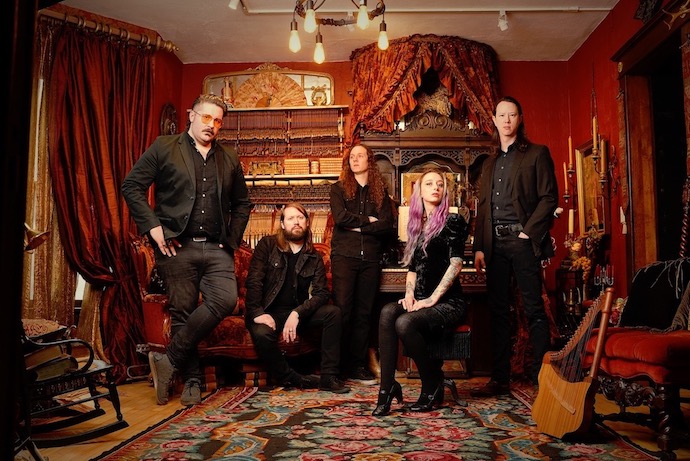 The album’s first single, “Ride Out“, arrived with an animated video by Seth Whitehurst of Shadow Puppet Horror Theatre. As for the role it plays in the album, I’ll share a quote from vocalist Chris Kang: “‘Ride Out‘ simmers with the adrenaline and gut-churning dread of the dawn of battle. As one of humanity’s final wars ravages the land, sea, and air, a young soldier feels the coming storm in her bones and wonders if, when faced with taking a life, her rifle will be an extension of her will, or a lead weight in her hand.“

The song is terrific. The drum-and-bass rhythms are guaranteed to get your head moving; the wooziness of some of the riffs have a narcotic effect; the vocals remind me of Jon Anderson‘s (the stellar UK prog-rock band Yes); and when the band really kick into high gear near the middle (when the harsh howls come in), it’s an electrifying change. But more changes lie ahead, including  subdued moments of strummed guitar and head-hooking drum patterns, and an extravagant finale that might put your heart in your throat. 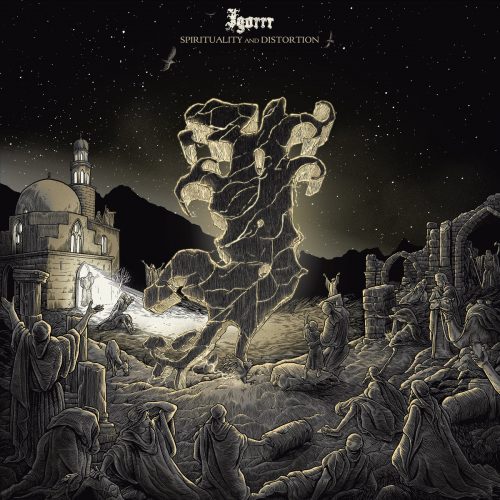 Now we come to the fourth band in today’s collection that we’ve heaped praise upon in the past. And this song — and video — will give you the most neck-wrecking case of genre whiplash you’ve yet encountered in this round-up. I don’t even know what genre label to put on the music, though that’s not a new challenge with Igorrr since it comes up every time mastermind Gautier Serre puts out something new. Metal Blade Records, who will be releasing Igorr’s new album, has made this attempt:

“Slamming together disparate musical styles ranging from death and black metal to breakcore, Balkan, baroque and classical music in a manner that is as unconventional and unpredictable as it is thrilling, Igorrr are unlike any other act.”

Consider further that Serre enlisted these acoustic performers to help him realize his vision for the album (which moves away from the elements of electronic music he has used before): violinist Timba Harris, bassist Mike Leon, pianist Matt Lebofsky, Oud player Mehdi Haddab, accordion player Pierre Mussi, Kanoun player Fotini Kokkala, and harpsichordist Benjamin Bardiaux, among others.

There’s quite an array of vocalists on the album, too, including Laure Le Prunenec, Laurent Lunoir, Pierre Lacasa, Jasmine Barra, and none other than George “Corpsegrinder” Fisher who adds heaviness to “Parpaing”, which Serre describes as “a cheap tune of 8bit music”.

Okay, enough with the background info, let’s turn to the first advance track “Very Noise“, which is accompanied by a 100% what-the-fuck? animated video created by the insane genius of MeatDept. It’s an absolute joy to watch, and the music is an absolute crazy joy to hear. It’s almost entirely percussive, and entirely manic, even though it’s executed with surgical precision. So many different ingredients burst to the surface, including soaring choral voices and harsh growls, that you probably couldn’t count them if you tried. The combined effect is eye-popping.

The name of the new album is Spirituality and Distortion. Metal Blade will release it on March 27th.

(Thanks to both TheMadIsraeli and Miloš for pointing me to this video.) 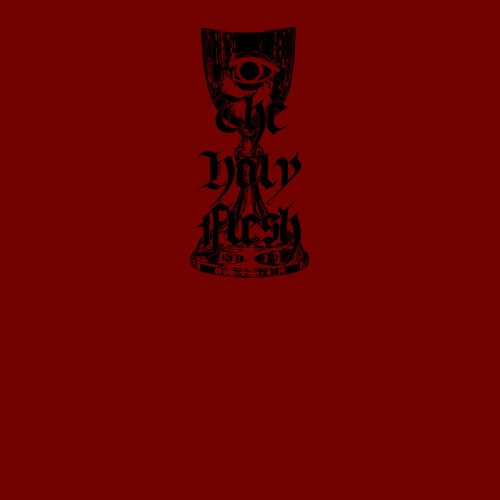 Without intending to do so, I saw that the first four songs I chose for this collection were all from major-label releases. So I decided to conclude with a self-released track by an unheard-of UK black metal band named The Holy Flesh.

“Emissary I” is the only track by The Holy Flesh that’s now available on Bandcamp, though it comes from a debut album named Emissary and Vessel that was digitally released on December 26, 2019. The fact that the entire album stream is no longer available suggests to me that a label has picked it up, but we’ll see. That would not surprise me, because this song is tremendous.

I usually thank either Rennie (starkweather) or Milos at least once in these collections, and here I’m thanking them both, because both sent me links to this track. Rennie summed up the track with a reference to the direction of the new ROSK and to “black tinged Fields of the Nephilim/Rubicon“. If you have trouble wrapping your mind around that particular combination of names, I don’t blame you, because I did too — but when you hear the song they make some sense.

Reverberating guitar melodies create a haunting, gothic mood that becomes increasingly perilous, thanks in part to the savagery of the vocals. The music also has a strong, head-moving rhythmic drive (no blast beats here), and a prominent bass performance that complements the ghostly gleam of the guitar. The song has a seductive, otherworldly aura, but something sinister lurks in its shadows.

I do hope the album as a whole surfaces again soon, because I’m certainly intrigued by this song and anxious to hear more.

P.S. Wouldn’t you know it, not long after completing this write-up I discovered that the entire album, Emissary and Vessel, has recently been uploaded for streaming on YouTube — and you can find that here.